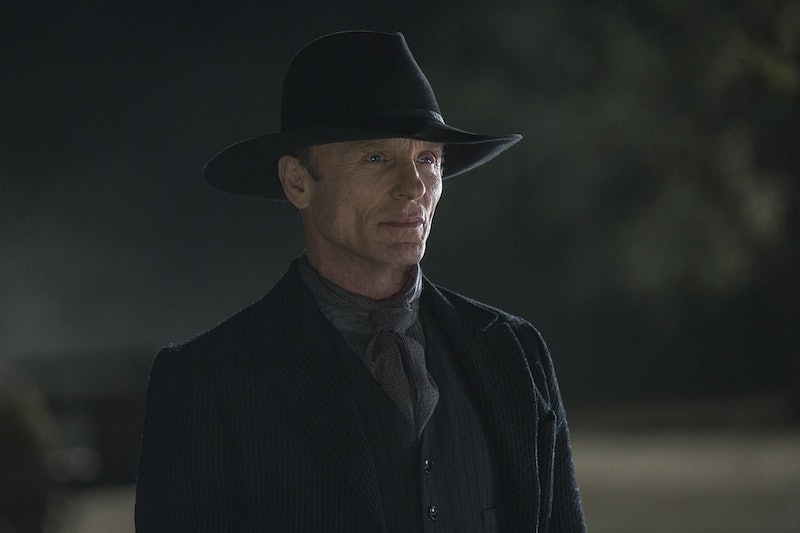 With Denzel Washington leading a revamped Magnificent Seven in theaters right now and a new adaptation of the android-cowboy film Westworld coming to premium cable, it's a good time for the modern Western. The highly anticipated Westworld reboot premieres Oct. 2 on HBO and looks as mind-blowing as the original movie must have been to audiences in 1973. Both the film and the series mash up conventions of science fiction with conventions of the Western to tell the story of a futuristic adult theme park that can be as dangerous as it is realistic. HBO's show boasts an ensemble of heavy hitters, including Anthony Hopkins, Evan Rachel Wood, and Jeffrey Wright. Four-time Oscar nominee Ed Harris plays the Man In Black in Westworld , a sort-of successor to Yul Brynner's Gunslinger in the original movie with one important twist.

In the movie, the Gunslinger is a featured attraction of the park. You know, like Space Mountain or the Jaws ride. He's a robot programmed to help guests live out their frontier fantasies of quick-drawing on a rival cowboy. I should mention that Westworld the movie was written and directed by Jurassic Park author Michael Crichton. And you know what happens with the Tyrannosaurus Rex when the systems at that unconventional resort go down. Think of it this way: the Gunslinger is the Tyrannosaurus Rex of Westworld.

When The Hollywood Reporter first announced the news of Harris's casting back in 2014, his character was formally named the Man In Black, though he carries some characteristics of the Gunslinger. HBO's release proclaimed that the Man In Black would be nothing short than "the distillation of pure villainy into one man."

In the full-length trailer for the show, Harris looks every bit the part of a classic Western baddie, strolling through saloon doors silently and unloading his gun into a line of enemies. Apparently, the Man In Black is a longtime visitor to the park and thus, a total expert in living this lifestyle. But it also seems as if he's become a crusader of sorts, out to right the wrongs of the prescribed existence forced onto the park's citizens. But what does he want in return? "What if I told you," he asks an unknown party, "I'm here to set you free?" Check out the rest of the action-packed, dystopic preview below.

So, the Man In Black resembles and is being sold as a bad guy. But the trailer frames him as a bit of a hero in that he's interested in setting the android workers of the park free. So I'm wondering from whose perspective the "villainy" diagnosis comes. Westerns tend to be straightforward in their portrayal of good and evil. (That's why Scandal adopted the black hat v. white hat analogy.) But Westworld introduces questions of free will, ethics, and what it means to be human that will undoubtedly complicate things.

At the Television Critics Association presentation of the show earlier this year, Harris did his best to explain his character's place in this world without spoiling the thrust of the series. As reported by Slash Film, Harris said:

There’s an awful lot about this man I’ve been asked not to discuss. You learn about who he is in the outside world, his past, why he is here and who exactly he is. He’s been coming here for 30 years...I think something happened to him at some point that [there's ]this part of him that’s very dark, very violent. All of a sudden he recognized this was a real part of him he’d never really lived within his life outside...But there’s also a much deeper purpose for him being here at this point. He thinks there’s some deeper level to what’s happening in this park.

Should the Man In Black be transitioning his wardrobe into a lighter, more heroic color? The showdown begins when Westworld opens to the public on Oct. 2.