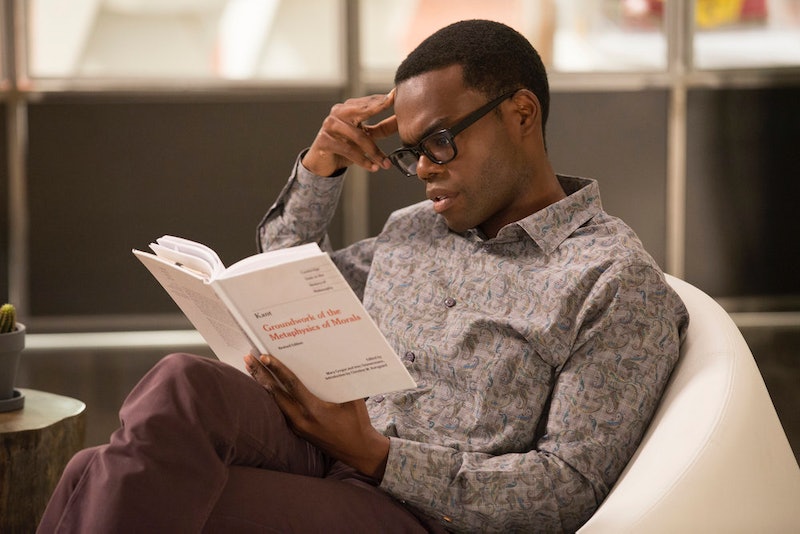 One of the first things that struck me about The Good Place is its use of diverse names. Not only do the characters hail from all over and reflect the entire world, but the character names on The Good Place are not all easily recognizable to Western audiences. I find that refreshing: we've had enough Jacks and Rachels on television. I also find it intriguing, because the meaning of certain names can be everything in a story as mythical as this one.

In an interview with Variety, creator Mike Schur noted that The Good Place was inspired by Lost . He even went so far as to run brainstorms by Lost executive producer Damon Lindelof, who more recently is toying with religious themes and a spooky afterlife on The Leftovers. However, the aspect of The Good Place that is most like the ABC serial drama is the mystery element. Our characters have found themselves in a place where something is not right, and their fate hangs in the balance. If I learned anything from seven years watching and scrutinizing Lost, it's that names can inform character, and sometimes lead to clues!

The same could be said for all of these characters. The Good Place explores morality and ethics in ways that many of us may not have considered before. It's also a mystery. Something is up with the Neighborhood, and I want to figure it out. If your fate is in your name, there's only one way to begin.

As she herself pointed out, Tahani's full name translates to "Congratulations, beautiful." However, she's a bit congratulatory (read: condescending) at times and Tahani doesn't feel like she's been blessed with the best wishes in the afterlife, so the name has a bit of irony.

Tahani's soulmate, on the other hand, has a name that means "building the universe" in Chinese. The Good Place has been built by Michael, with some flaws, so that's interesting. An older translation of Jianyu says it means "to cover" — and he has been covering up the fact that he doesn't belong by staying silent. Finally, if you separate the name, "Jian yu" also means prison in Mandarin. I don't know what it means, but I have a feeling it's a big blue paw print.

Chidi simply means "God lives," in Igbo, a language spoken in Nigeria, where Chidi was born before he moved to Senegal. That fits the setting and tone of The Good Place. However, it doesn't speak much to Chidi's personality or love for ethics. I can't find a direct translation for Anagonye on the internet, but if you break down the parts in Igbo, "ana" means earth/ground, "nye" means for, and "go" can mean anything from "to make," "to buy," and "upwards." I don't want to delve too deep into a language that I don't understand, but I can see the appeal for someone like Chidi. On the other hand, perhaps one of the writers is a fan of the former Michigan State basketball player Aloysius Anagonye. Not everything has to be a clue.

It doesn't have to be close to Halloween for the name Janet to remind me of The Rocky Horror Picture Show and its square heroine. Janet is a diminutive of Jane or Joan, which are the female forms of John, which means "God is gracious." Janet is, quite literally, a gift from on high in the form of an information service.

The head honcho and builder of The Good Place is Michael, whose name means "who is like God" — accurate! However, as middle management, he is only like God. He isn't God himself. The Dharma Initiative fangirl in me wants to believe that his name is a Lost reference, but I doubt it. If Ted Danson starts screaming for his son Walt, we'll talk.

Finally, our anti-heroine's first name means "bright, shining one" in Greek. Much like her placement in The Good Place, that doesn't seem to fit our Eleanor. The name makes me think of grandmothers, lonely protagonists of Beatles songs, or Leslie Knope's hero Eleanor Roosevelt. Shellstrop, on the other hand, has a fun meaning. A "strop" is a strip of leather used for sharpening razors. A "shell strop" is a high quality strop that requires little breaking in. Eleanor is trying to sharpen her image, so it's as fitting as it is whimsical. In British slang, "strop" also means to throw a tantrum or to be in a bad mood.

If there is indeed another Eleanor Shellstrop out in the universe who was denied her clown-filled cottage in The Good Place, this name is important. How could two people with the same not very typical name live such different lives? That's just one of the many mysteries The Good Place has laid out in its first season, and I for one am on the case.

More like this
At 14, Jenny Han Wrote Rom-Coms About Her Friends & Fan Mail To Leo DiCaprio
By Alyssa Lapid
'The Summer I Turned Pretty' Book Ending Is An Emotional Rollercoaster
By K.W. Colyard
The Future Of 'All Creatures Great & Small' Is Confirmed & Wedding Bells Are Ringing
By Rebecca Fearn and Frances Stewart
'Stranger Things' Fans Are Begging For Steve To Live For The Funniest Reasons
By Grace Wehniainen
Get Even More From Bustle — Sign Up For The Newsletter