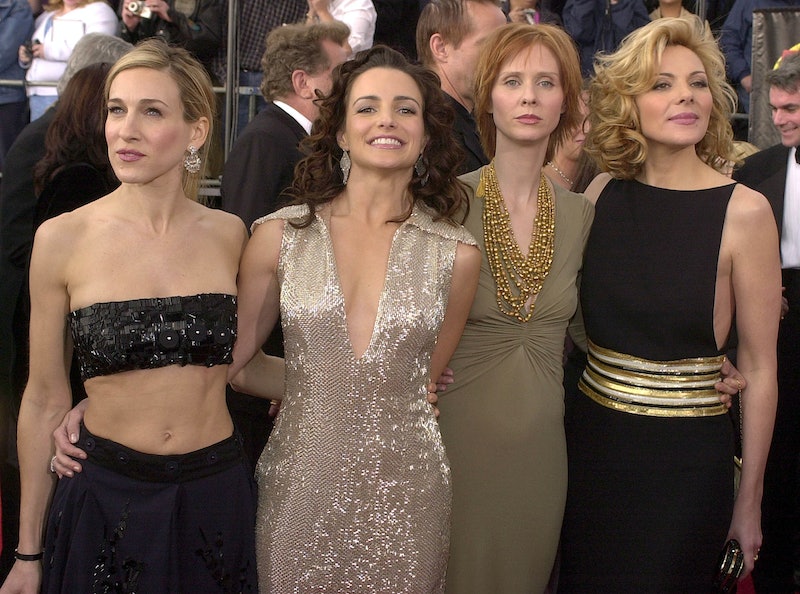 Let’s put an end to all of those Sex and the City feud rumors right now, shall we? Sarah Jessica Parker totally wants to, and she’s throwing down some major wisdom about them and why she thinks they started in the first place, so there's really no better time than now. You remember the rumors: There were some alleging that the cast members didn’t get along, and even some alleging that the main cast members were feuding about money. It all sounds like every other ridiculous, false story written about female Hollywood co-stars not getting along to me — and, based off what Parker had to say about what started the rumors in the first place, she totally agrees.

In a recent interview with Time, Parker shot down the rumors once and for all: “It’s always so heartbreaking to me that there was this narrative about Kim and myself because it just didn’t reflect anything that happened on that set.”

So listen up, rumor mongers: The catfights were never even a thing. Parker went on to say how frustrating it is that those old rumors still exist: "I posted something on Kim's birthday and people were like ‘Oh my God, I didn't know you liked her!' What? We were all at liberty to walk away at any time!”

It’s just as crazy to me as it is to Parker that these unconfirmed rumors still persist. Why exactly are people so comfortable perpetuating this story of women not getting along? Of course, Parker had something great to say about that, too: In the interview, she added her thoughts on why people are so eager to believe that these women didn’t get along: “Nobody asked those questions of shows with men. Isn’t that interesting?”

Indeed it is. What Parker is pointing out here is the kind of double-standard that exists for women in the media, especially women who are part of an all-female cast. Because of the constant barrage of messages fans get saying that women “can’t get along” and “can’t be friends,” an all-female cast like the women on Sex and the City are more likely to bear the brunt of this vicious double-standard than a show that is mostly starring men. Yet, it’s the women who get saddled with these rumors for the rest of their careers.

So, let’s let these horrible rumors disappear, shall we? It’s totally possible for a group of women to be professional and do their jobs and not hate each other in the process. Guess what? It happens every day. And Sex and the City worked hard to prove that very thing both with the relationships that it portrayed in front of and relationship it built behind them.