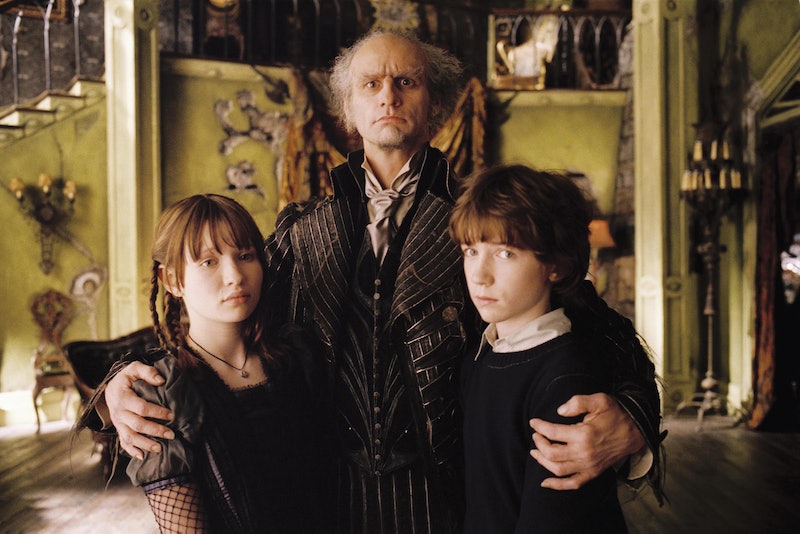 Like many fans of Lemony Snicket's A Series of Unfortunate Events, I've been anxiously awaiting news of the upcoming Netflix adaptation of the series. The show premieres on January 13, 2017, and will star Neil Patrick Harris as the dreaded Count Olaf, which is enough to get me excited for it. But what to do until then? Put way too much thought into the events of the series, of course. The books revolve around the woes of the Baudelaire children, who lose their parents and their home in a mysterious fire. They are then placed into the care of the wicked Count Olaf, who plans to steal the large fortune they inherit when they come of age. Violet, Klaus, and Sunny spend the entire series on the run from Olaf. Along the way, they find themselves put under the "protection" of numerous guardians. Note the scare quotes — that's because, by and large, any adult who is given responsibility for the orphans is bumbling and incompetent, if not outright cruel.

While they're almost all bad, they aren't uniformly terrible. So with nothing to do but wait until the show's release early next year, I've ranked the Baudelaire guardians based on how absolutely terrible they are at their job — from least terrible to most terrible.

It's a shame Uncle Monty found himself pumped full of snake venom, because he was by far the best Baudelaire guardian. Not only was he kind, living in a house full of books and snakes, but he genuinely cared about the Baudelaires, and offered them an exciting life doing the things they loved. But alas, he died, and that's that.

When Kit Snicket drives up at the end of The Grim Grotto and the Baudelaires hop into her car, it seems like their luck might finally be changing. As per usual, things go horribly wrong and Kit winds up dead, but not before giving birth to a baby girl whom she entrusts to the Baudelaires. I like to think if Kit, a smart and competent adult, had showed up earlier, the series might not have been as unfortunate.

Count Olaf's kind neighbor who befriends the Baudelaires in the beginning of the series and uses her legal knowledge to help defy Olaf's plan, Justice Strauss seems like the perfect guardian for the Baudelaires. In fact, after Count Olaf is unmasked as the conman that he is, she even offers to adopt the children. Unfortunately, Mr. Poe refuses to let them live with a non-relative, because he's terrible.

Despite having terrible taste in women, Jerome is actually a pretty nice guy who genuinely cares about the Baudelaires. He offers to take them far away from Count Olaf, which is an offer I personally would have taken him up on. But he's not quite brave enough to confront Count Olaf and try to rescue the Quagmires, the Baudelaires' only friends. He gives them up because he's too much of a coward, which is (ahem) unfortunate.

So on one hand, Madame Lulu was feeding Count Olaf information about the Baudelaires' whereabouts the entire time, which is bad. On the other hand, once they confront her, she tells them that one of their parents may be alive and offers to help them find a safehouse of V.F.D., the secret organization the Baudelaires' parents were a part of. Whether she's good or bad is inconclusive, since she was eaten by lions, so we'll just throw her somewhere in the middle.

Mr. Poe, you terrible, incompetent nincompoop. I'm tempted to rank him as a number one, but it's hard when he so obviously means well. He cares about the Baudelaires and wants to give them a safe home — he's just really dreadful at his job. And since he's technically only responsible for dropping the Baudelaires off at their various homes, I'm going to cut him a little slack and put him above the more mean-spirited guardians.

First of all, why are you requiring three children to work in a lumber mill in exchange for protection? Did you really think three kids, all under the age of 15 (one of whom is literally a baby), would be productive workers in a mill? Also, did you really threaten to give them away to a random secretary if they didn't do a good job, especially when that secretary is obviously Count Olaf in disguise? Sir is an all-around lousy human and guardian.

Who allowed this man to become vice principal? First he makes the Baudelaires live in a shack that's covered in fungus and crabs and forces Sunny to become his secretary (again, can everyone stop making a baby perform jobs way outside her skill set?). Then he insists that the Baudelaires give him 29 bags of candy and buy earrings for their obnoxious classmate. And after all that, he still can't keep Count Olaf away, making him completely useless.

It may take a village to raise a child, but that village shouldn't be populated with nutjobs who like to burn people at the stake. The townspeople of the Village of Fowl Devotees promise to protect the Baudelaires, but instead allow them to be framed for murder, refuse to hear evidence which proves their innocence, and try to put them to death. Not great parenting skills.

Esme Squalor makes my blood boil. She's a jealous, controlling, and way too obsessed with what's "in" and "out." Oh, and she's also a homicidal maniac who falls in love with Count Olaf and decides to spend her time hunting the Baudelaire children. Seriously, woman, I get that Jerome wasn't your cup of tea, but Olaf? Really?

Where to start. He regularly tries to entrap, steal from, and kill the Baudelaires. He follows them around, sabotaging every attempt at happiness that presents itself to them. He tries to marry Violet, which is all kinds of ick. He has basically zero redeeming qualities. He tries to be a bit noble by the end, but it was too little, too late.

You might be thinking, "That's not fair! Surely, Aunt Josephine isn't worse than Count Olaf!" Maybe my loathing of Aunt Josephine is misplaced, but in my mind, she is without a doubt the most incompetent of all the Baudelaires' guardians. She's weak, cowardly, and instead of trying to protect the Baudelaires, she asks them to save her. She runs away rather than try to protect the children, and I have zero sympathy for her. She deserved the leeches.