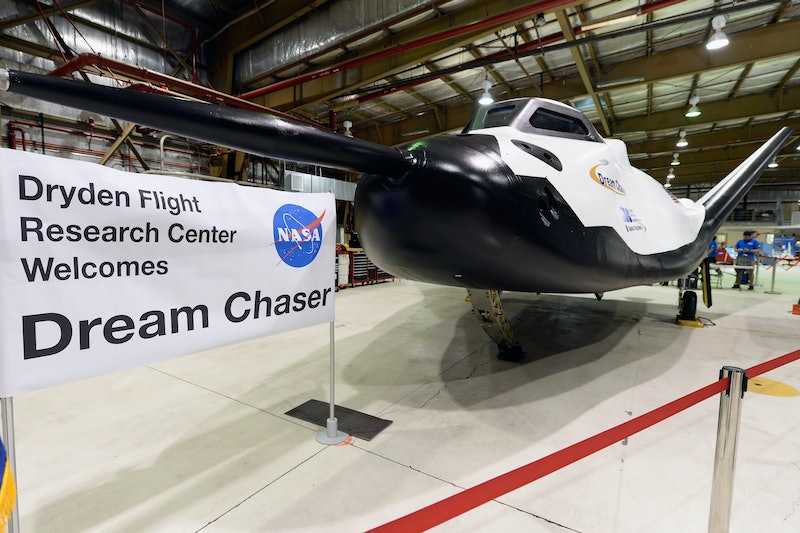 The United Nations will be launching its first space mission in 2021, it announced Tuesday at the International Astronautical Congress. Most notably, the 14-day United Nations mission will make space travel and exploration more accessible for developing nations, according to the United Nations Office for Outer Space Affairs (UNOOSA). The benefits of space travel extend to areas as diverse as agriculture and education, and countries that do not have their own space programs will finally be able to take advantage of these benefits.

The UNOOSA mission will use Dream Chaser, a reusable, 30-foot-long spacecraft built by Sierra Nevada Corporation. Though developing countries are the mission's target audience, all UN member states will be able to propose payloads (the equipment, satellites, and/or personnel carried by the spacecraft).

Many of the UN member states "do not have the infrastructure or financial backing to have a standalone space program," UNOOSA director Simonetta di Pippo said in a statement. The mission will provide these states with "the ability to access space in a cost-effective and collaborative manner within a few short years."

If a country's proposal is accepted, it will be asked to pay for the mission cost based on factors including the resources needed to host the payload as well as the country's ability to pay. The UN is also seeking sponsors to finance the mission, according to UNOOSA.

Here are some of the reasons making space travel accessible to a greater number of nations is such a progressive step forward:

Farmers make the world go 'round — at the very least, they keep our stomachs full. Remote sensing satellites can help farmers, scientists, and policy makers monitor conditions on Earth. The information can then be analyzed and used to predict agricultural output, as well as to anticipate and prepare for food shortages and famines.

This one's a no-brainer, but space travel helps with research and development. Technology developed by NASA is used in everyday life on Earth, including in processes like freeze drying, the production of LED lights, and water purification, among others. Imagine the scientific breakthroughs that developing countries can make when they gain access to space.

Global Navigation Satellite Systems use satellites orbiting the earth, ground control stations, and receivers to calculate geographical positions. This information is used by airports, train stations, and even me when I drive my car to unknown places. Satellite systems are especially useful when it comes to moving goods across the planet.

Space-based technologies, including satellite communications, help communities that have traditionally had trouble accessing education. An increase in educational level means an increase in economic prospects, which helps women and young girls become more empowered and independent. Additionally, space is a popular topic that can inspire people to further their education in the sciences.

And no, I'm not talking about sending humans to Mars. Two-thirds of the world's population will live in urban areas by 2050, UNOOSA reported. This means that cities are facing the problems that come with increased urbanization, including housing, pollution, and transportation. Space-based technology, such as remote sensing tools, can help measure development and predict future trends in human settlement, which leads to better urban planning.

Natural disasters are not preventable as of now, and can be difficult to recover from. Typhoon Megi hit Taiwan and China on Tuesday and Wednesday, and people are reeling from its effects. With space technology, disasters can be predicted, which can help people evacuate and secure their properties. Satellites are also reliable in the event that land-based communication systems are damaged.

There are a lot of negative ways humans have impacted the environment. We have a lot of work to do if we don't want things to get worse. Thanks to space-based technologies, including surveying and monitoring tools, we have been able to understand more about our ecosystems, UNOOSA reports. This helps us figure out how to do things like conserving water and improving air quality.

Space travel has more benefits than meets the eye, and it is important that access of it for developing nations increases. Just like we have with NASA-developed technology, we can all reap the benefits of space travel in the future as well.