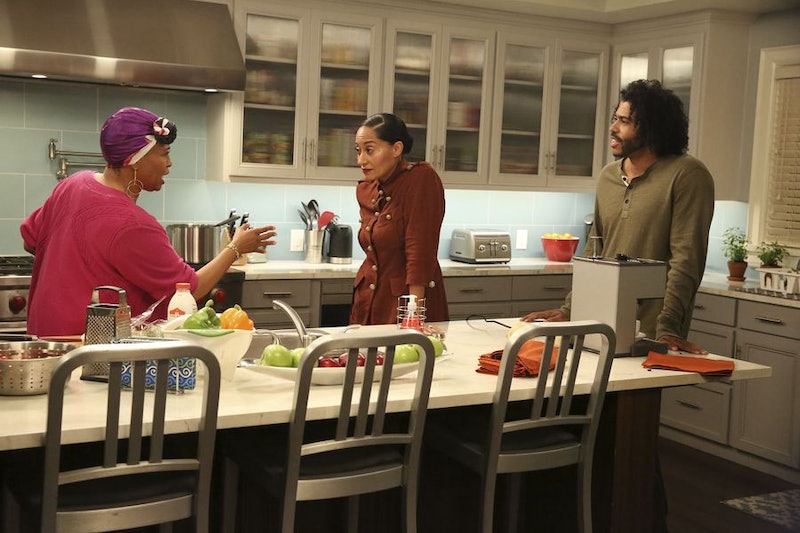 Already, black-ish has made up for its underwhelming premiere with a strong followup featuring one of the season's most anticipated moments — Hamilton star Daveed Diggs guest stars as Johan, Bow's younger brother. Why hasn't he been on the show before? According to Dre's voiceover, it's because he's been living in France, becoming very snobby about meal times and refrigeration. But Johan's presence is incidental to the real issue of the episode — Zoe announces that she doesn't believe in God anymore when asked to deliver grace at a family dinner.

Naturally, each member of the family reacts differently to the news, and Diggs fits naturally into the family's diverse reactions. Johan supports her, dismissively calling religion incompatible with science. Rainbow is more neutral — as a doctor, she understands what he's arguing, yet she also uses religion to fill in the gaps where she says science doesn't fit. Dre quickly decides that atheism is "white sh*t," and that only an entitled, spoiled black person would lose the tradition of religion that dates back to slavery. And Ruby, outfitted in her best collection of headwraps, has admonishments for Johan, Zoe, and Dre, for failing to live up to her particular brand of Christianity.

Dre, meanwhile, can barely focus long enough on a single prayer without thoughts of Kettle Corn going through his head. Ultimately, he realizes that he's drifted away from devout religion himself, and realizes that when moments are tough — like when the new baby's heartbeat is hard to find on the ultrasound — that all of the Johnson's reflexively trust in something, be it "God" or simply the faith that things will work out the way they're supposed to.

And while Zoey does say "thank God" during the ultrasound scene, I appreciate that she doesn't renounce her atheist beliefs, nor does Johan have to go back on his. Dre and Bow have to accept that their daughter may wind up having different opinions than they do.

And when it came to Diggs' presence, the Hamilton joke count was remarkably low, with the only one I caught when Ruby announces "What'd I miss?!" as she arrives late to the family dinner. Overall, Diggs' guest spot is far less like a big star riffing on their own persona, and feels way more like Johan is simply another member of the growing, wacky Johnson family. I think it would be great if he popped up again, like Bow's parents or Dre's sister.