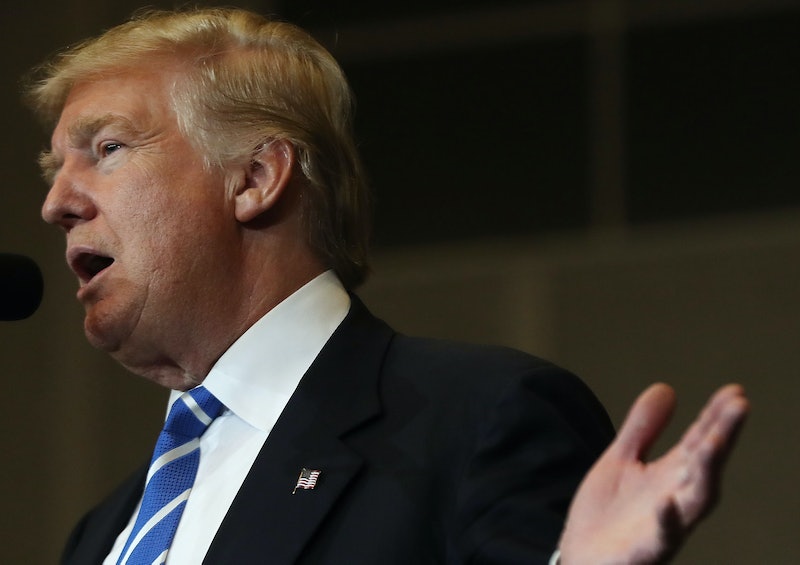 Since Monday's presidential debate, Republican candidate Donald Trump has spent much of his time with the media fat-shaming a former beauty queen. Trump's comments about former Miss Universe Alicia Machado are garnering lots of attention, and though the candidate somehow hasn't been convinced to rescind his vile remarks, women in government have clearly had enough. On Wednesday, Sen. Claire McCaskill of Missouri called Trump out for his comments regarding Machado and other women — but her message to the controversial candidate proves that imitation isn't always the sincerest form of flattery.

During Monday's debate at Hofstra University in New York, Trump's opponent, Hillary Clinton, brought up Machado as an example of Trump's attitude toward women. Clinton alleged that Trump had previously called Machado derogatory names like "Miss Piggy" after she won the 1996 Miss Universe pageant; Trump owned the pageant until last year. In an interview with Fox & Friends on Tuesday, Trump responded to Clinton's claims, but he didn't do himself any favors:

She gained a massive amount of weight, and it was a real problem.

After Trump's follow-up comments about Machado and her weight, McCaskill tweeted that Trump should be subjected to a "public daily weigh-in." It was a taste of Trump's own medicine.

Sure, McCaskill's seemingly sarcastic tweet comes across as funny, considering the many times Trump has subjected women to unfair scrutiny because of their bodies. For instance, he previously criticized primary contender Carly Fiorina's face and called Rosie O'Donnell unflattering names. In a way, it's easy to think that Trump deserves to be and should be scrutinized himself.

Jokes and sarcasm aside, though, McCaskill made her point by stooping to Trump's level. Granted, McCaskill's tweet probably wasn't meant to be taken literally, and there's no reason to believe that Trump's comments were anything less than intentional. Still, imitating Trump's style might not be the best remedy to body-shaming, which has already become too normalized in American society.

Reactions to McCaskill's tweet seemed divided on Wednesday. Some responses celebrated her boldness, while others called the sentiment "immature" and "petty."

According to her Twitter, McCaskill attended Monday's primetime debate in support of Clinton. That means she heard the initial conversation about Machado firsthand. She took to Twitter during and after the debate to praise Clinton's performance on stage.

It was her tweet on Wednesday that really drew Trump-level attention, though. Ultimately, her message makes sense: Trump has offended countless women with his comments throughout his campaign, and it's time he changes his tune. It's her delivery of that message that's troubling, though. Trump's impolite manner shouldn't degrade the already-nasty political discourse that's typical of presidential elections.