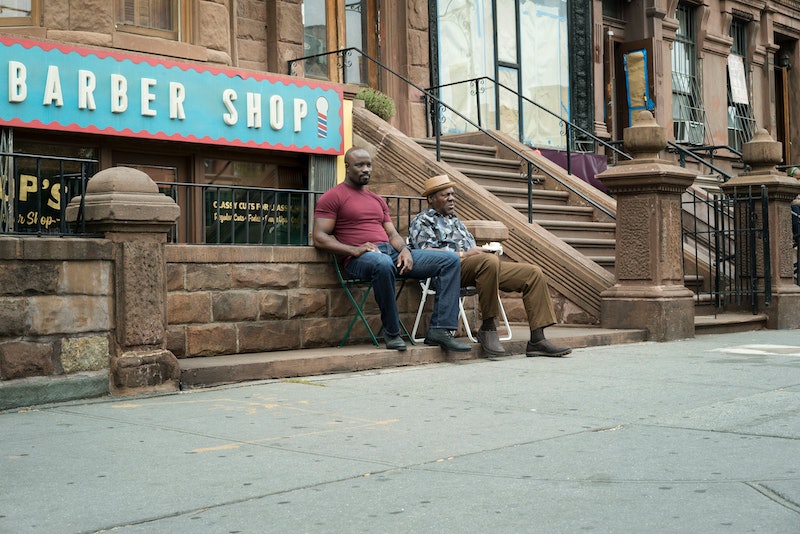 Luke Cage's debut in Jessica Jones was one of the best hints at a bigger Marvel universe on Netflix, and now that he has his own show, the world can expand even further. Let's break down all of the Marvel Easter Eggs in Luke Cage Season 1, from jokes about Bruce Banner to visual gags that mock the original comics. Warning: there will be major Luke Cage spoilers below, so don't read past the episode you're on if you don't want to know what happens.

Most of the MCU references on Netflix are relatively coy. However, as these shows progress and the Defenders team-up looms ever closer, they've got to be a little more direct. One of the things that I think is interesting about the Netflix entries in the Marvel Cinematic Universe is that on the whole, they mostly only reference the first Avengers movie. There isn't a lot of talk about the Mandarin, Sokovia, Hydra, the attack on London in Thor: The Dark World, or Inhumans. Nobody talks about joining S.H.I.E.L.D. or speculates who signed the Accords. But you know what? Maybe that is very realistic, or at least very New York. They care the most about Loki's attack on New York because it happened to them.

There are little nods and touches to the comics throughout. You'll notice that Luke's wallpaper is chainlink, referencing his comic book's aesthetic in a fun way, for example. But as far as tips and nods to the greater Marvel Cinematic Universe and Easter Eggs referencing the source material, here's what Luke Cage has to offer the fans.

The first episode kicks off with one of those signature vague MCU references. Luke's employer Pop talks about "the fellas Downtown" helping others, unlike Luke. Now, he could be talking about Daredevil and Jessica Jones, but I have a feeling that this is about "the Incident," also known as the Chitauri invasion in The Avengers. Hell's Kitchen is still Midtown, as far as I'm concerned. We also see a guy on the street selling home videos of "the Incident" on DVD. However, while he casually references "the blonde dude with the hammer, the old dude with the shield, the green monster and I don't mean Fenway," he also name checks Tony Stark directly, which I found interesting.

As far as other Netflix heroes go, Mariah mentions that she is taking Wilson Fisk as an example of what not to do. We also see the low-level Daredevil antagonist Turk in Episode 2, playing chess with Fish. He first showed up in Daredevil as a literal human trafficker, but has mostly been dealing weapons since. Nobody is impressed with him in Harlem, and he ultimately decides to go back to Hell's Kitchen "where it's safe." Too funny. Luke also says he's "not for hire," which could be a nod to Heroes For Hire in the comics.

Pop also calls Luke "Power Man" as an affectionate nickname, referencing one of his comic book alter-egos. However, my favorite reference, and this is one that comes back in a major way later on, is to the Iron Man 2 villain Justin Hammer, who was played by Sam Rockwell. Fun fact: he is being held at Seagate Prison, where Luke Cage got his superpowers, along with Trevor "the Mandarin" Slattery from Iron Man 3. Most of us have put Iron Man 2 out of our minds, so I found that nod particularly charming.

When Chico sees Luke's powers, he calls him "one of them." Diamondback, a Marvel comics villain with ties to Luke Cage, is mentioned in this episode as Cottonmouth's supplier. Episode 3 also mentions a frank discussion about vigilantism between Rafe Scarfe and Misty Knight. It seems like Misty, who wants to believe in the system, might be Team Iron Man. She's not a fan of how the Avengers work without checks and balances. Rafe, who witnessed the Incident close up, would rather thank them and skip the paperwork.

When Episode 4 goes to Seagate Prison, there are a ton of references. We get to truly meet Reva Connors, who appeared in a vision before and was seen in flashbacks on Jessica Jones. She vaguely references Justin Hammer again, shaking off the ghost story that there are "millionaires hidden in dungeons" at Seagate. Dr. Noah Burstein and Albert "Billy Bob" Rackham are both comic book characters. When Luke gets his powers and literally punches his way out of prison, his clothes resemble the classic Luke Cage comic book look, even though he "looks like a damn fool." He also says his catchphrase, which many fans remember from Jessica Jones, "Sweet Christmas."

That said, I'm not done with Justin Hammer. Turns out that he, or his people, have developed something in the Ukraine called the "Judas bullet" that's made from some kind of metal "not from this Earth" that has to do with The Incident. So, it's a Chitauri metal? At least it's not vibranium. I don't think Steve Rogers or T'Challa would be cool with that.

Finally, when Claire Temple appears in Episode 5, she catches her mom up on the end of Daredevil Season 2 — remember how evil ninjas and zombies attacked MetroGeneral? She also describes Matt and Luke's powers. Not Jessica though, but they actually didn't spend that much time together.

Speaking of Jessica Jones, Episode 6 starts right off with an episode of Trish Walker's call-in radio show "Trish Talk" that's all about Luke Cage. What a delightful tie-in. Claire refers to Jessica Jones as Luke's girlfriend, and then she's never mentioned again. She also brings up Matt a couple times. The DVD guy returns. Someone refers to Luke Cage as "Harlem's Captain America," which is again a rare instance of a Marvel character being cited by name. We get our first glimpse of Diamondback at the end of Episode 7.

A close-up of Luke Cage's ID says that it expires February 2016, which makes me wonder if this is taking place before Captain America: Civil War. There's also a brief mention of President Obama singing Al Green. I bring this up because while the fictional Matthew Ellis was elected President in the MCU in Iron Man 3, there is evidence to suggest that Barack Obama does exist in the MCU, so the reference is not a slip-up.

The next three episodes slowed down the references to focus on the story. Luke referred to himself as Power Man again. Mariah talked about superheroes upsetting the natural order of things, and then described Jessica Jones and how she took down Kilgrave in a speech. There's also a quick reference to the Judas bullets being made of alien metal, and Reva's flash drive, which was a plot point in Jessica Jones, also shows up in this part of the season.

One big thing that happens in Episode 10 and could become a big damn Marvel deal later on, is that Misty gets shot in the arm. In the comics, she has a bionic arm, so this seems like it could be the beginning of that for her character.

There are references to Misty losing her arm again, and someone calls Claire Temple "Night Nurse" — a Marvel character that Netflix combined with Claire Temple when developing Rosario Dawson's role, though a different version of Night Nurse will be played by Rachel McAdams in Dr. Strange . Claire also mentions Matt again, even while kissing Luke. Sigh. Finally, in the closing montage, Claire grabs a number from a flyer for self-defense classes that looks suspiciously like this Iron Fist promo. Is she going to meet Colleen Wing next?

We also see Diamondback imitate his comic book garb in the final showdown. Luke's final hoodie has a yellow lining, and Misty also makes an appearance in a red dress that looks a whole lot like her iconic super suit. Everything else is just loose ends. Method Man's rap mentions Iron Man and "Heroes For Hire" again. Turk returns. Stan Lee's face can be spotted on a poster. I even think that Luke mentions S.H.I.E.L.D. at one point while talking to Misty, but it's possible he said "a shield."

By the time The Defenders rolls around, these connections will be more than just Easter Eggs. As fun as it is to see Luke Cage as a lone wolf, bring me the team-up already!

More like this
The 'House Of The Dragon' Showrunners Revealed One Key Similarity With 'GoT'
By Grace Wehniainen and Kadin Burnett
Here’s How 'House Of The Dragon' Diverges From The Book’s Timeline
By Allyson Johnson
Everything To Know About 'And Just Like That...' Season 2
By Jack Irvin
How Marvel’s 'She-Hulk' Changes Her Comic Book Origin Story
By Brad Witter
Get Even More From Bustle — Sign Up For The Newsletter