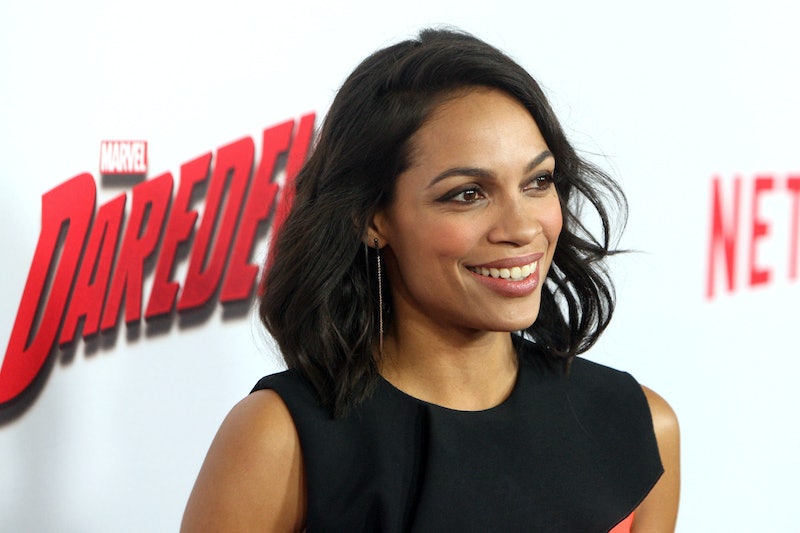 Marvel has comic books, action figures, video games, a series of über-successful blockbuster films, two television shows... and now an original series on Netflix, that most trendy of streaming services. What's next, a Broadway musical? (Oh wait... Spider-Man the musical was a thing.) It won't be long before the Marvel Cinematic Universe is beamed by super-powerful satellites directly into the optic nerves of every man, woman, and child on the planet. With the M.C.U. growing larger, more complicated, and more inter-connected seemingly every day, you'll be forgiven if you have trouble keeping track of who's playing whom. This is especially confusing in the case of Rosario Dawson, whose character Claire Temple on Netflix's Daredevil is an amalgamation of two separate Marvel creations.

When the Sin City star's casting was first announced, speculation abounded that Dawson would be playing big-name hero Elektra — who you'll remember was immortalized on film by Jennifer Garner in that so-bad-it's-good 2005 spinoff of that so-bad-it's-just-bad 2003 Ben Affleck Daredevil adaptation. However, creator Drew Goddard (of such acclaimed cult classics as Buffy, Alias, Lost, and The Cabin In The Woods) defied all of our expectations; when Dawson's character was formally announced at New York's Comic Con this past October, there was a collective head scratching. "Who's Claire Temple?" asked pretty much everyone everywhere.

There's a reason the name "Claire Temple" was difficult to associate with Daredevil... and that's because the character actually originates from an entirely different line of comics: the Luke Cage series. Totally not coincidentally, Luke Cage is one of the other three Marvel series coming to Netflix in the near future, along with Jessica Jones and Iron Fist, ultimately culminating in an Avengers-like miniseries titled The Defenders.

In the comics, Claire Temple is a nurse romantically tied to Luke Cage. So what's she doing in Daredevil? And how does her onscreen counterpart differ from her comic book origins?

During the Comic Con announcement, Head of Marvel Television Jeph Loeb clarified what Claire Temple's role in the upcoming series would be: "She's a nurse... who works at night," he said. This is a clear reference to the Night Nurse series, which originally ran for four issues in 1972-'73. In that incarnation, the titular nocturnal RNs were a trio of women — Linda Carter, Georgia Jenkins, and Christine Palmer — who tended to injured superheroes in a secret room in their NYC hospital.

In 2004, Linda Carter resurfaced individually as "the Night Nurse" in an issue of Daredevil. During this more recent iteration of the character, Carter took care of not just the Man Without Fear, but also — again, totally not coincidentally — Luke Cage and Iron Fist. (She also appeared in issues of Doctor Strange and The New Avengers.)

With Dawson playing "a nurse who works at night" in a Daredevil-centric show, her character initially seems to have more in common with Linda Carter than Claire Temple. So why did Goddard choose the latter name over the former? To me, it signals that Dawson's character will go on to be an important figure in Netflix's Marvel franchise beyond this upcoming series.

Perhaps after Daredevil, Rosario will go on to also star in Luke Cage. With Claire Temple first popping up in Daredevil and Luke Cage making his first appearance in Jessica Jones , viewers will be primed and ready by the time the Luke Cage series rolls around. If this is how it shakes out, then it would appear that Netflix is already doing an excellent job of building an interconnected universe to parallel its big-screen predecessor.

More like this
Yes, Joseph Quinn Is Actually Playing The Guitar In This Epic 'Stranger Things' Scene
By Alyssa Lapid
At 14, Jenny Han Wrote Rom-Coms About Her Friends & Fan Mail To Leo DiCaprio
By Alyssa Lapid
Florence Pugh & Zoe Kazan Have Teamed Up For A Major New Netflix Series
By Rachel Mantock
'The Summer I Turned Pretty' Book Ending Is An Emotional Rollercoaster
By K.W. Colyard
Get Even More From Bustle — Sign Up For The Newsletter