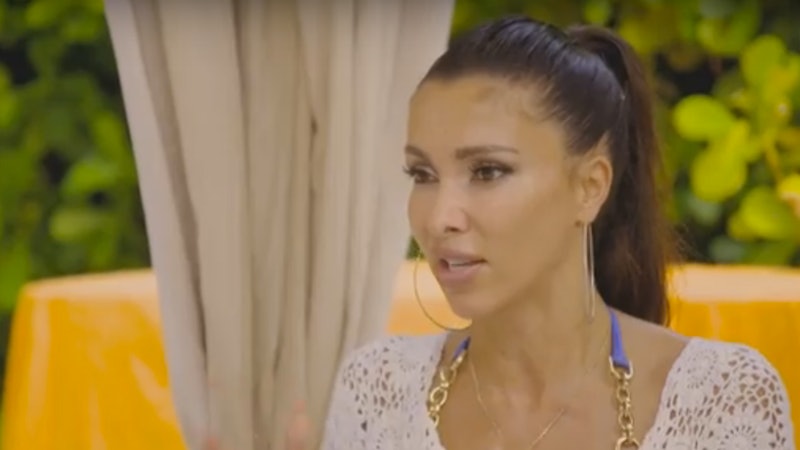 Lest you think the onslaught of new fall series is even close to over, E! is spinning off original series WAGS into an all new series, WAGS Miami, and its stars have personalities just as big as the ladies on the original series. And, since the whole series revolves around what types of relationships these women have, who is WAGS star Metisha Schaefer dating? According to E!, she was single during the season, but, in an interview with Bustle, she was able to confirm that she is now in the early stages of a new relationship. She doesn't want to say his name, but she did add that the new guy is based in Miami and is an athlete.

Metisha opened up about her prior relationship history on WAGS Season 2, where she tearfully confessed that she was once in a relationship with Nicole Williams' boyfriend, Larry English. During her appearance, Metisha even suggested that Nicole had set her eyes on Larry before he'd broken up with Metisha. Naturally, Nicole denied the claims, the whole meal devolved into arguing and fighting, and Metisha returned to Miami for the premiere of her own show, WAGS Miami, satisfied that she'd gotten her issues off of her chest.

While on WAGS LA there's a strict hierarchy between the women who are married and the women who are single or dating, Miami doesn't seem nearly as strict. Regardless of her relationship status, Metisha is still poised to be a major player on the upcoming season.

She's BFFs With One Of Her Costars

Metisha is incredibly close friends with fellow WAGS Miami star Hencha Voight. These two are always together, and they will surely be by one another's sides during the season, when E! says they'll be starting a clothing line together.

Like many of the women on WAGS and WAGS Miami, Metisha does a lot of modeling, and you can spot a lot of her work posted on her Instagram. And as a true beach-loving Miami denizen, she is not afraid of showing up for a job with just a bikini and her smizing skills (Top Model is what real models use for inspiration, right?).

According to Metisha's IG bio, she speaks five languages and has posted about her Turkish heritage before, proving that she's actually quite worldly and she occasionally offers commentary on global issues.

She Has Her Own Lifestyle App

If you want to live like a Miami WAG, get Metisha's lifestyle app, simply called "Metisha." It seems to be mostly exclusive pictures that she doesn't post to Instagram or Snapchat, and her workout routines. It's nothing too shocking, but it also won't break the bank, since it's a free download and only two dollars a month to subscribe.

Why are Hencha and Metisha rocking custom made Marlins jerseys in the WAGS Miami trailer? Maybe they love baseball, or... maybe one or both of them is getting to know a member of the local team. While it doesn't really matter to her overall importance to the show if Metisha is dating casually throughout the season or if she stays totally single during WAGS Miami, it looks like this cast and the local Miami sports scene are very close knit.

More like this
Brittany Snow & Tyler Stanaland Are Separating After 'Selling The OC'
By Grace Wehniainen and Radhika Menon
Clayton & Susie Broke Up, Citing "A Significant Amount Of Pain" After 'The Bachelor'
By Jordyn Tilchen
Everything To Remember About Lace Morris Before 'Bachelor In Paradise' Season 8
By Grace Wehniainen
Bachelorette Gabby Kissed Her New Fiancé On 'Dancing With The Stars'
By Jake Viswanath
Get Even More From Bustle — Sign Up For The Newsletter