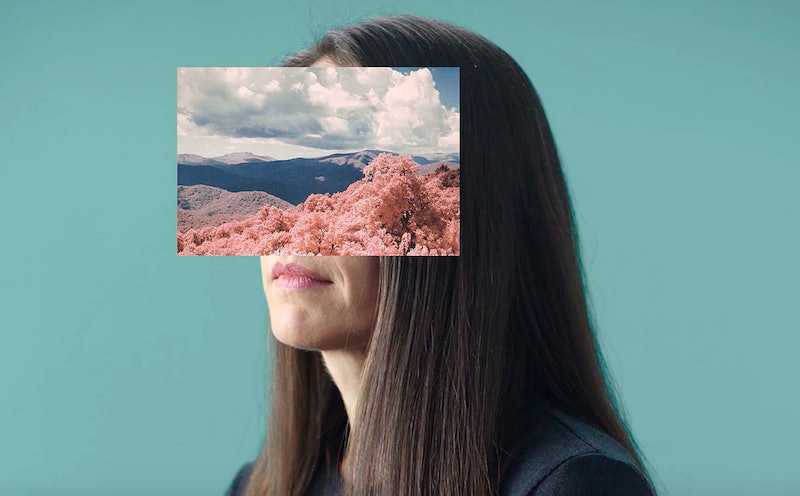 One in five American adults — a staggering 43.8 million people — experiences mental illness each year, and yet stigma and secrecy continue to surround discussions of mental health, often preventing people from seeking help when they need it. Enter Anxy, a magazine that focuses on mental health through the lenses of design, art, and writing. Currently being funded through a Kickstarter campaign, Anxy aims to promote open discussions about the mental and emotional challenges that people face every day and smash the stigmas that accompany mental disorders.

“We want to slowly break the misperception that traumatic experiences are abnormal or unusual,” Indhira Rojas, founder and creative director of Anxy, tells Bustle. “They are more common than we care to admit to each other. In fact, they are part of the fabric of our human existence.” Rojas was inspired to create the magazine by her own experiences as a survivor of childhood trauma, and her feelings of isolation when trying to cope with that history. “I felt I was carrying this heavy weight and it was very hard to find spaces where I could talk about it,” she recalls. “I started wondering: why is it so difficult for us to open up about the darkest and most affecting moments in our lives, even with the people we trust?”

From the 16 million U.S. adults who deal with a major depressive episode each year, to the 6.8 million affected by generalized anxiety disorder, mental illness is very common — but you wouldn’t know it from the faces people present to the public. Rojas remembers that, as she was dealing with her own mental health struggles, she wondered where all of the other millions of people with similar experiences were. “The only possible answer I could come up with was that they were hiding, just like me,” she says. “They were pretending to be OK when, in fact, they weren’t. We are carrying these stories that have significantly shaped who we are, and yet we are too afraid and too ashamed to open up about them.”

And that’s where Anxy comes in: “I wanted to create a space where these conversations could be possible, where these untold stories could be shared and we could all feel connected and empowered by them,” Rojas tells Bustle. She hopes that readers will find “a sense of connection with a community of people who are also navigating and processing difficult experiences in life.”

Anxy will be released bi-annually, with each issue orbiting around a central theme, such as “boundaries” or “loneliness.” The magazine will feature a mix of design, art, interviews, personal essays, and original reporting. Anxy thus offers a different approach to mental health than what you might find in more medically-minded publications. “Art, design and creativity can provide a safe way to access and explore feelings and emotions,” Rojas explains. “The art provides a point of entry, which goes beyond words, beyond the analytical or logical, into possible unexpected territories.”

At a time when many traditional print media platforms are struggling to stay afloat, it may seem strange to be launching a print magazine. However, Rojas and the Anxy team’s decision to launch the magazine in print was quite deliberate, and meant to further discussions of how we approach mental health in the public sphere. Beautifully designed, this is a magazine that is meant to be read and displayed in public — and in carrying the magazine with them, or keeping it on their coffee tables, readers can make a statement about the importance of bringing meaningful conversations about mental health out into the open.

Rojas and the Anxy team launched a Kickstarter campaign for the magazine on September 19, and they’ve already reached more than 40 percent of their funding goal. To find out how to get involved, visit the Anxy Kickstarter page. The first issue of Anxy is set to debut in May of 2017.