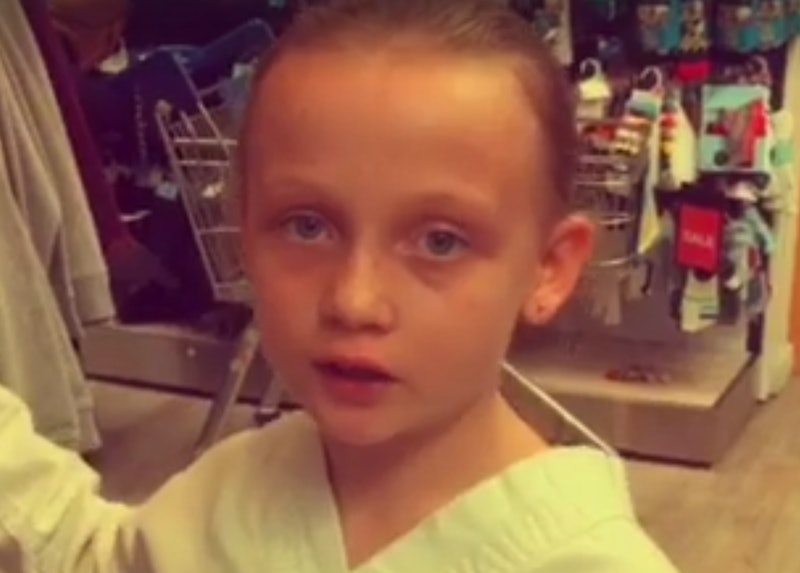 Kids face repressive gender norms every day, so it’s extremely frustrating to see companies marketing products that reinforce restrictive stereotypes about what boys and girls can and cannot be. Thankfully, one young feminist in England is having none of it. The 8-year-old girl’s rant about sexist clothes at Tesco is a thing of beauty that has rightly gone viral. Fierce and surprisingly articulate, this kid is not here for your outmoded stereotypes, thank you very much.

Daisy Edmonds and her mother, Becky, were at the Swindon branch of Tesco when Daisy noticed a pattern in the kids’ clothing: The girls’ tops said things like, “Hey!”, “Beautiful,” and “I feel FAB-U-LOUS,” while the boys’ shirts had designs that said, “Desert adventure awaits,” “Think outside the box,” and “HERO!” Daisy was not a fan, to say the least. “It’s unfair because everyone thinks that girls should just be pretty and boys should just be adventurous,” she says in the video. “I think that is wrong because why should boys and girls’ clothes even be separated? Because we’re just as good as each other.”

Pointing toward a gray T-shirt with the message “Think outside the box,” Daisy asks, “What does this mean? It means, ‘Go on your adventures, let nothing stop you, go for your own dreams.’” A nearby girls’ shirt with “HEY!” written in pink letters is less motivating. “What is that even supposed to mean?” Daisy asks. “I don’t find that inspiring.”

This is far from the first time that a retailer has come under fire for selling sexist children’s clothing. In 2014, Target garnered criticism when images of a pair of baby onesies went viral, one with the message, “Future Man of Steel,” and another that said, “I only date heroes.” (Oof. I can’t roll my eyes hard enough at that one.)

In a Facebook comment, Daisy’s dad makes clear that Daisy has nothing against traditionally “girly” clothes; in fact, “She loves wearing pretty clothes, she loves pink, glitter, nail polish and frilly dresses, etc.” The problem here is with explicit messaging that sets very different standards for girls and boys: Boys are supposed to be adventurous, creative, and heroic, and girls are supposed to be pretty. That’s obviously a bad message for girls, in that it tells them that their physical appearance is the most important thing they have to offer, but it’s also limiting for boys — because what if they want to be “FAB-U-LOUS,” too?

The look on Daisy’s face when she’s assessing the Tesco clothes is priceless:

That’s an expression that clearly says, “I can’t with this sexist nonsense,” and I love it.

The video of Daisy has been viewed on Facebook 110,000 times, and has clearly struck a chord with viewers. In response to the video, a Tesco spokesperson told The Telegraph, “We stock a wide variety of clothes suitable for girls and boys and listen to the views of our customers when reviewing our range. We'd like to thank Daisy for her feedback and we can assure her that new styles will be arriving in stores shortly.”