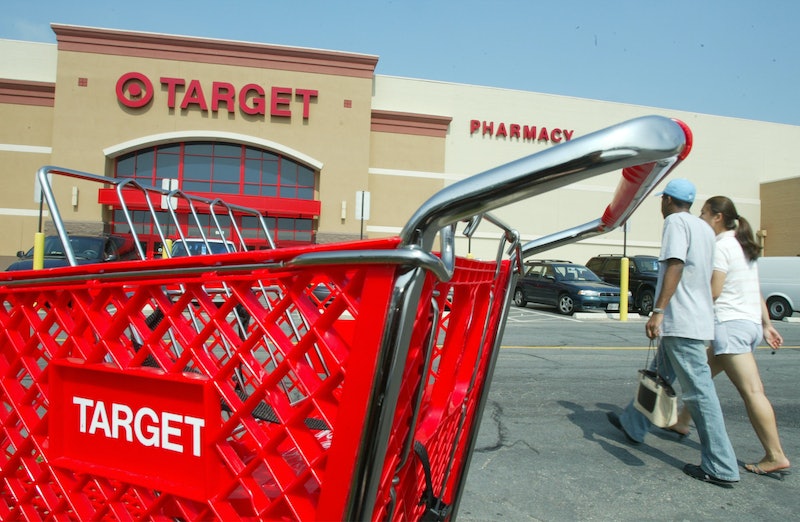 Unfortunately, it’s time for another round of “Did No One Think This Was a Bad Idea?” A set of baby pajamas with a seriously sexist message has surfaced, and it’s got some feminist moms up in arms. Target’s Marvel line includes tiny blue pajamas reading “Future Man of Steel,” while the pink version says — wait for it — “I Only Date Heroes.”

Just when we thought we were taking steps toward raising more equality-minded children. Le sigh.

Christine Logel, a professor at a Canadian university, came across the pajamas and snapped a picture. Her colleague Aimée Morrison posted them to her Twitter account, bringing Target under fire from parents who don’t really think young girls should grow up aspiring to date amazing people rather than be amazing themselves. (What? People don't think that’s okay? *sarcastic scoff*)

Morrison tweeted of the pajamas’ message, “Boys can be heroes; girls can date heroes.”

Mic.com does bring up an interesting point, though: There’s nothing marking one of these pajama sets for girls and the other for boys. Thinking about this observation, it’s pretty clear that gender stereotypes are very deeply engrained in our minds. In theory, a parent could choose to buy his or her son the pink version, and vice versa.

Then again, I kind of doubt this lack of distinction was intended, based on two other items on the racks at Target: The retail giant is also facing criticism for similar apparel in their boys and girls clothing section. A boys black muscle shirt says “Training to Be Batman,” and a purple tee in the girls section says “Training to Be Batman’s Wife.”

What? These tees are probably intended for 6 to 12-year-olds. I’m nearly 22 and I’m not even close to thinking about being anyone’s wife.

As a Target addict, this is pretty disappointing. I repeat: Did no one think this was a bad idea? It’s really too bad that out of all of the people these designs probably had to go through, not one saw something wrong and put the kibosh on them.

More like this
Yes, You Can Buy Off-White’s New Beauty Range In The UK
By Tomi Otekunrin
10 Show-Stopping Manicures From The 2022 BET Awards
By Paris Giles
35 Ideas For 4th Of July Nails That Go Beyond Red, White, & Blue
By Audrey Noble
22 Gorgeous Wedding Manicures For Brides & Bridesmaids
By Olivia Rose Ferreiro
Get Even More From Bustle — Sign Up For The Newsletter