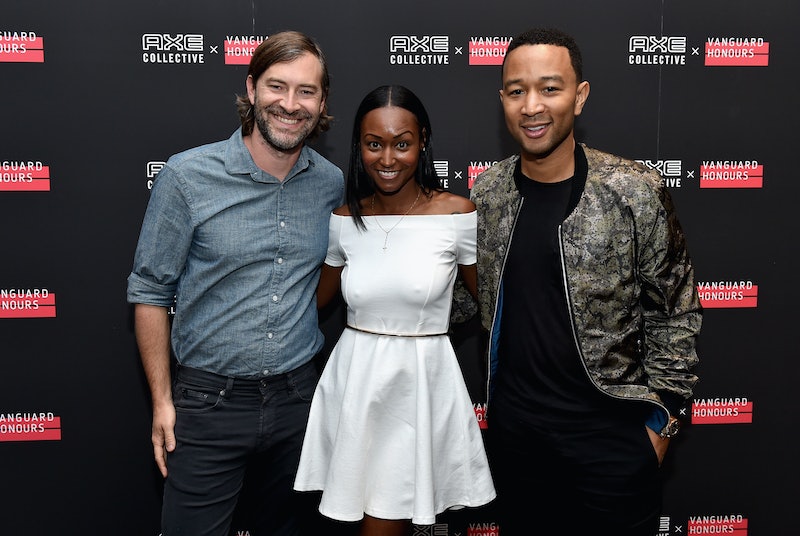 At the Toronto Film Festival 2016, entertainers and filmmakers John Legend and Mark Duplass partnered with AXE to do something remarkable. The two showbiz vets partnered with the staple men’s lifestyle brand — with the tagline “Find Your Magic” — during the festival for an amazing purpose. For Duplass and Legend, this wasn’t just a tagline, it was the story of their journeys and those of the up-and-comers whose talents they fostered in this partnership. They had different motivation for seeking young talent and helping make their dreams a reality, but together they used their platform, paid it forward, and even learned a little something along the way.

Three aspiring filmmakers had the experience of a lifetime at the festival after being handpicked by Legend and Duplass through the AXE Collective mentorship program — and I had the privilege of watching it happen. Badass mom Shema Jones ( A Love Undefined ), FSU student Francisco Cabrera ( Revolving Child ), and Africa native Tabi Bonney ( Secrets Never Die ), had their short films unveiled at TIFF during the AXE Collective Vanguard Awards, because their poignant commentary on social issues didn't go unnoticed by Legend and Duplass.

After witnessing Legend and Duplass’s devotion to their mentees (in-person meetings, phone calls, emails, and Skype sessions included), I would’ve never even known the men's big projects, La La Land and Blue Jay, were being featured at the festival. Legend, for one, knew he wouldn’t be where he is without the help of those who believed in him. As a struggling musician in college, he got a big break performing on Lauryn Hill’s “Everything Is Everything,” was later discovered by Kanye West, and has worked with countless artists ever since.

“The mentoring aspect comes from knowing how important people have been in my life, in various stages where they helped me become better at something,” the 37-year-old said. “Whether it was making music, understanding the business side, inspiring me to be better at understanding and lift people up in the best way.” And now that he made it, he felt it was his turn. “I feel like I should pay it forward,” he said.

According to Legend, there’s nothing shameful about rising artists seeking help. In fact, it’s only more powerful. “I never thought that doing it on my own was going to be the secret. There was nothing to me that was noble about [that],” he said. “How do I make it better and push myself creatively by working with other people that bring out the best in [me]?,” said Legend.

Duplass, on the other hand, described his experience as the “complete opposite.” His motivation to help others stems from his past, in which he barely had any guidance. He and his brother Jay knew art was their passion, yet had no idea how to make a life of it. “We were banging around trying to figure out what to do and experience a lot of failure, for years,” said the 39-year-old. “If I can save somebody the banging my head against the wall that I went through for 10 years trying to figure out how to do something, I would love to.”

As far as they’ve come in life and work, both men easily related to the difficulty of figuring things out and fighting to “make it” in their early twenties.

“I had a feeling like I had all this magic inside of me, but not knowing how to express it, not being good at it, it was incredibly frustrating for me,” Duplass said. He recalled ages 18 to 26 as “torturous” yet “exciting” years. “I really thought I had something to say, but I felt like I was tongue-tied.” Legend could relate. “I wanted a record deal but I didn’t realize I wasn’t ready yet because I hadn’t develop my sound,” he explained. “I hadn’t figured out my voice as a writer completely yet.”

The beauty of Legend and Duplass’s partnership is not only that they gave these hard-working filmmakers the stepping stone they craved, but they gained valuable intel from them in return. Legend explained how moved he was meeting with college freshman Francisco Cabrera, just a few hours before our interview. “He just decided he was gonna make the film. And he just did. I wish I was like that when I was his age,” he said. “That can-do attitude, it’s inspiring for me.”

The wide-eyed look filled with promise on each of these filmmakers’ faces made my experience. The same could be said for Duplass. “I’ve been to a hundred film festivals at this point of my career… When I watch them, I’m like, ‘This is a grand privilege to be here’ and I forget that,” he admitted. “There’s a vitality in that that I juice up on as I get older.”

I realized fancy equipment and big-name producers can only take aspiring artists so far, and as Legend and Duplass made clear, the gift of humble beginnings is truly the most invaluable for anyone trying to make it in showbiz.