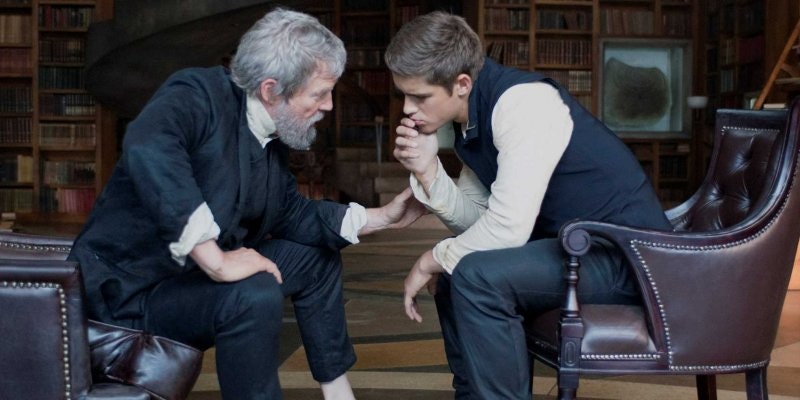 The Giver is one of those books that you had to read in school but didn't mind because it was so good. When I heard it was (finally) getting made into a movie I was so excited. But then The Giver trailer was released and I realized, "Oh no, they made it exactly like Divergent." Not that there's anything wrong with Divergent , but they're different books––they shouldn't result in the same movie. It seems that the director of The Giver decided that YA dystopias all have to be the same. If The Hunger Games and Divergent are action-based, dramatic, fast-paced movies, The Giver needed to be too.

But not all YA dystopias are alike. The beauty of The Giver was in that stark, barren nature. The world was black-and-white, making it all the more meaningful that Jonah could suddenly see colors like the red of an apple. It made kids reading the book think about what would happen if the government decided to make everything perfect. It made people question the idea of the ultimate utopia. Is that what The Giver film sets out to do? I don't think so. I think it's setting out to copy the YA dystopian film recipe and make a lot of money. Here are 5 instances of copycat syndrome.

THE WORLD IS ALL IN COLOR

The colorless world Jonah lives in is a big part of why he's so desperate to leave once he learns of the world beyond, and the colors that come with it. But the film's trailer shows that the movie is 100% color. Without that juxtaposition in the film, a large part of Jonah's motivation falls flat. Sure, maybe teenagers are more likely to enjoy something that's in color, but is this about integrity to the book or making money? (Answer: $$$$)

Scary woman who is in charge of a society and maybe not as honest as she should be? Check. Oscar-winning actress playing the role? Check. In this case Divergent gets Kate Winslet and The Giver gets Meryl Streep.

Guess which movie teenage girls are more likely to see: a film with a 12 year old boy protagonist or a film with a 24 year old male protagonist? If you guessed the latter you should work in the movie industry! That's how transparent the decision was to change 12-year-old Jonah to a man. We see right through you, Hollywood. We see you tapping into the teenage market and trying to encourage them to buy posters/t-shirts/buttons with Brenton Thwaites on them.

The Hunger Games and Divergent certainly capitalized upon this with their Peetas, Gales, and Fours, but those characters were written in the books to be those ages. The Giver casting a 24-year-old would be like if The Hunger Games cast Emma Stone as Katniss' little sister Prim to encourage more guys to see the movie––it's a marketing ploy. It's also destroying the point of The Giver which is that this young boy is coming to an understanding about his world and losing his innocence in the process. He needed to be 12. It was a stronger novel with a younger main character, but apparently that doesn't make for a good movie.

In the book version of The Giver, the characters have to take daily pills to keep them from doing things like dreaming, but in the movie it seems these have been changed from swallowable medicine to TERRIFYING DAILY INJECTIONS.

Why? Because that's scary and dramatic! I think what the director is missing out on is what exactly about the pills is scary. It's not the form they take, but what they do: essentially control your brain. But instead of making that the focus, the movie is going for the shock factor to better compete with movies like Divergent which uses flashy, dramatic moments because that's what's written in the books.

The Hunger Games has a booby-trapped arena, Divergent has army-esque training, and The Giver has....none of those things because that's not the kind of book it is! It's a quiet novel, one focused on the nature of living in a falsely constructed docile life. However it looks like the movie jazzed things up a bit with a chase scene where Jonah gets scooped up by a beam of light from a spaceship. Okay then.

Will I still go see the movie? Probably, because I fell in love with the book years ago. But will I be disappointed that instead of standing on its own two legs it's following a YA dystopia formula? Yes, and in the end all the tricks may backfire and leave it doing poorly in the box office anyway, because what made The Hunger Games and Divergent strong was relying on what was presented to them by the author, not following a pattern.

More like this
The 'Spiderhead' Movie Ending Is Nothing Like The Short Story It’s Based On
By Morgan Leigh Davies
16 Novels That Paint A Realistic Portrait Of Abortion
By K.W. Colyard
The First 'My Policeman' Trailer Features Harry Styles & Moody Romance
By Grace Wehniainen
Everything You Need To Know About The 'Knives Out' Sequel
By Grace Wehniainen
Get Even More From Bustle — Sign Up For The Newsletter