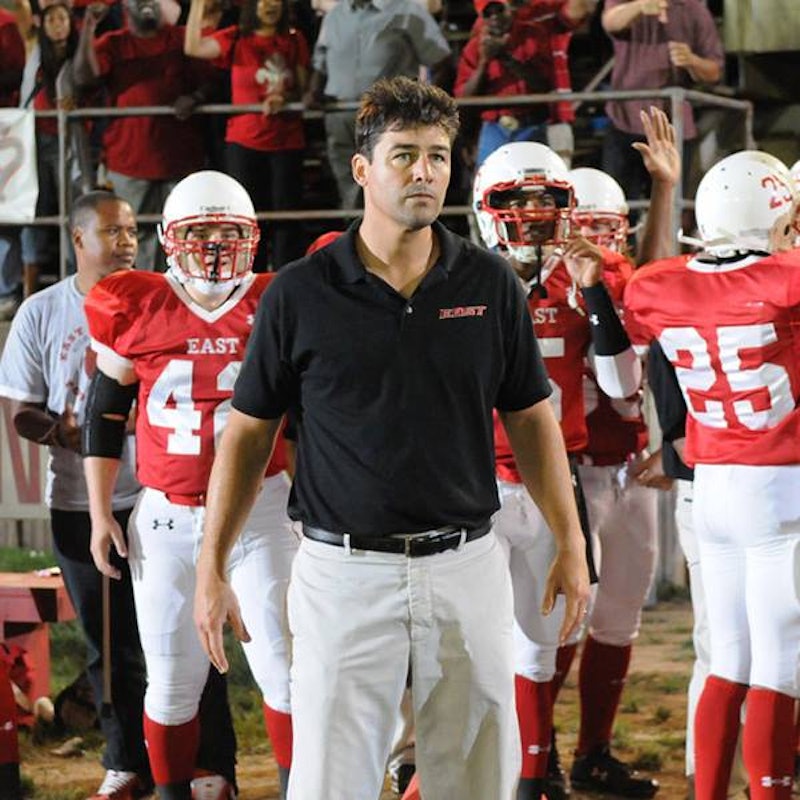 When the TV series version of Friday Night Lights first debuted on NBC, I did something that seems so egregious now — I refused to watch it. While critics and my friends raved about the show, the drama series about Texas football was a show I couldn't seem to get into. Years later, I finally marathon-watched the NBC/DirecTV series and realized that my time as a sports writer in Tennessee covering high school football was just like Friday Night Lights . I lived, breathed, and worked surrounded by Southern football culture as a staff writer for the Chattanooga Times Free Press, covering a high school football game (or two) every Friday night from 2006 until 2008.

It was my first job after graduating from NYU, a school that doesn't currently have a varsity NCAA football team. As a teenager, I went to a New York City public high school that didn't have a varsity football team at the time. To my editors, my former football-less Northeastern life seemed way more egregious than refusing to watch FNL — but they let me dive in to cover my first high school football games after shadowing a few veteran reporters as they kept score and walked the sidelines. Now almost decade later, I still miss walking the sidelines (it's a better view than the press box), that thrilling feeling after a game-winning touchdown, and doing post-game interviews with players (below).

Tennessee and Texas high school football aren't exactly the same — they are different states, after all — and I have never been on a football team myself, but I did notice a ton of cultural similarities between FNL the TV show and my own experiences during the real-life Friday night lights.

State Championships Are The Biggest Deal There Is

Much like FNL, going to "state" (a.k.a. the state championship game) is a big freaking deal, because it's the biggest stage in high school football and really hard to get there. Players endure a full regular season, and then — if the team qualifies — region playoffs and the state tournament, where it's one-and-done. "State" can make stars.

Football Is Definitely The Talk Of The Town

High school football means a lot to a city or town — and everyone talks about it, just like Dillion did in FNL. Football of every kind is a major conversation topic throughout the fall season.

Back in Fall 2007, my editor asked me to be part of the Chattanooga Times Free Press' own "High School Football Pick'em Box" — which featured sports journalists from around town making their Friday night predictions. After a few weeks, this former New Yorker was ranked first among experience sportswriters. My editor got numerous phone calls asking, "Who is she and how did she do it?" I got accused of cheating on local radio. Coaches would call the office to ask me for my upcoming picks and if I thought they would win that week.

Yep — all of that micro-fame was all thanks to high school football.

The Coach Sets The Tone

As FNL fans can attest, Coach Eric Taylor is the greatest there is. He's firm, but fair, as kind and well-respected by his community and players. He truly sets the tone on the field, and that's true in real life as well.

High school coaches of other sports teams, like volleyball or soccer, sometimes have more than one job at the school — like guidance counselor or biology teacher. But coaching high school football is more often than not a full-time job. High school football coaches are 100 percent devoted to their teams — and if they're lucky, so are their players — which makes them leaving for another team a huge deal.

Parents Are Very Much Involved

Before I watched FNL, I thought Buddy Garrity sounded like some kind of a parody, but his buttinsky character rang so true to me when I watched the show while reflecting on my Teneessee experience. He is pretty much every high school football parent I encountered and I love him a little more because of that.

In FNL, Smash Williams is determined to receive a college football scholarship — and he eventually receives one. In real life, that is the goal for many players, so they can both attending college and play the game they love so much, but it can be hard to stand out among so many talented players.

It Feels Like Everyone Plays — Or Has Played — Football

One of my favorite storylines from FNL is when nerdy, awkward Landry decides to join the Dillion Panthers during Season 2, perhaps because my nerdy self related to it too much. In Tennessee at least, it seemed like literally every male had played high school football or was currently playing high school football — rosters are usually huge — and every female has investment in the game too, either as a mother, girlfriend/wife, fan, or as a job.

So Landry joining up with the Panthers and later the Lions was something I related to a lot, except that I was the nerd taking stats and reporting on the games from the sidelines.

So while FNL has "Texas forever," I can proudly say Iived Tennessee forever.