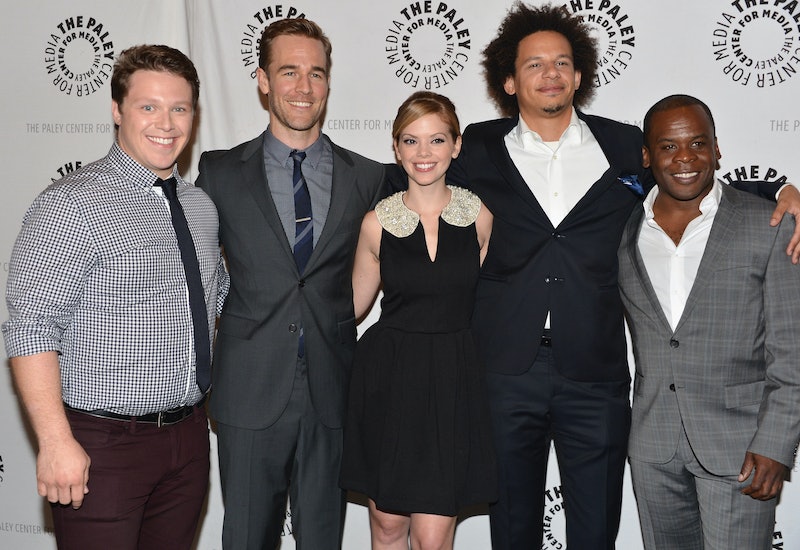 For Happy Endings fans, it still hurts to think about how the little-watched but much-loved ABC sitcom was sadly canceled in 2013 after three hilarious seasons. TV hasn't been the same since viewers had to abruptly say farewell to Max, Penny, Brad, Jane, Alex, and Dave. But three years later, the gang is reuniting, and you'll want to be able to watch the Happy Endings lost episode live read, which will take place at Entertainment Weekly's PopFest in October in Los Angeles, according to EW. If you happen to be in the City of Angels, you can purchase tickets to see the PopFest reading live on Oct. 29 at The Reef in Downtown LA.

For those of us who can't make it to the festival, I'm hoping EW will be kind and post a video of the event on the internet after the lost episode graces the world with its hilarity. The writers and cast sound like they're already excited, as the Happy Endings writers' Twitter account has already declared the writers' room "open for the lost episode!" Former Happy Endings writer-producer and current Insecure showrunner for HBO Prentice Penny has been tweeting photos from the room, declaring that it's "Not. A. Game" and "The gang's all here." Former cast member Zachary Knighton (who played Dave in the series) also posted an Instagram photo to show his excitement about the reunion. The event even seems to have its own hashtag already: #HappyLostEp.

So even though the show isn't returning with a new season of episodes, fans like myself still have a lot of high hopes and expectations for this one-off "lost" episode of the show. There's so much to pack in one new episode, which is numbered as if it's the season premiere of a hypothetical, fantasy Season 4. Will Alex and Dave keep breaking up and getting back together? Will Penny ever tell Dave about her feelings for him? Has Max found true love? And I can't help but wonder what kind of zany adventures Brad and Jane have been up to as the show's cutest, most well-matched married couple.

The show may have started off feeling like a 2010s' version of Friends, but its trademark humor and unique characters helped it come into its own. Happy Endings' jokes were always peppered with rapid-fire pop culture references that you'd have to listen closely for, such as Kris Jenner's autobiography, The Usual Suspects, and Heathers, to mention a few.

With this new "lost" episode upon us, I can't help but wonder what modern 2016 topics the show will address, because so much has happened. Here's hoping the Happy Endings gang will make reference to Kanye West's potential 2020 presidential run, Donald Trump, Kylie Jenner's lip kits, Taylor Swift's summer romance, "Becky with the Good Hair," and so much more.

Knowing the Happy Endings writers and cast, they'll be making sure that this new "lost" episode was worth the wait.

More like this
Everything You Need To Know About Kanye's Post-Kardashian Dating Life
By Bustle Editors
Taylor Swift Visited The 'Glee' Set For This Bizarre Season 5 Episode
By Grace Wehniainen
Watch Kelly Clarkson Sing A Taylor Swift Breakup Song About A Toxic Relationship
By Alyssa Lapid
Zach Gilford Admits He Forgot Taylor Swift's Name When He Starred In Her Music Video
By Jake Viswanath
Get Even More From Bustle — Sign Up For The Newsletter
From hair trends to relationship advice, our daily newsletter has everything you need to sound like a person who’s on TikTok, even if you aren’t.