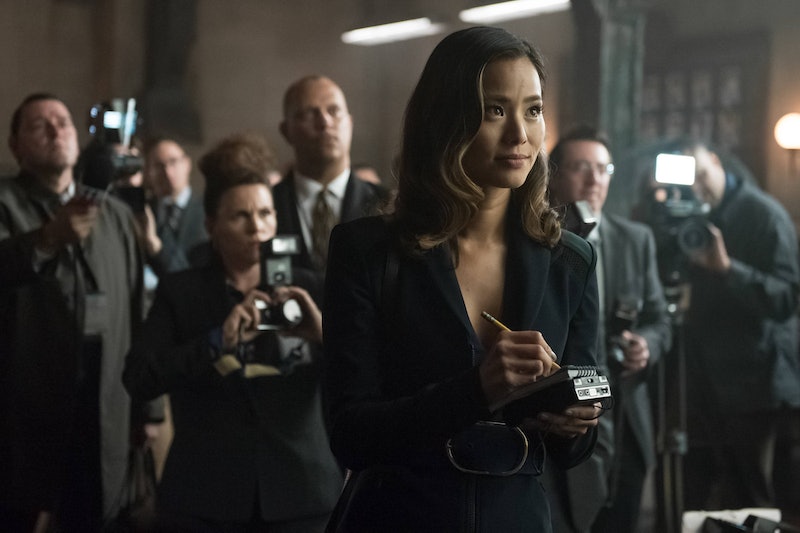 The Sept. 26 episode of Gotham brought a character who took off last season back into the thick of things. Lee Thompkins has returned to the city she used to share with her ex; meanwhile, Jim Gordon may be moving on with Gotham Gazette reporter, Valerie Vale. The town isn't lacking for pushy journalists, but so far, Valerie appears to be the most resourceful and determined of them all. It didn't take her long to target Jim Gordon as a guy who knows things — also, as a guy she can play to get ahead. Since the season began, Valerie and Jim have been in a push-pull relationship that went from the professional to the personal when they slept together last week. Does that reporter making waves look familiar to you? Valerie Vale is played by Jamie Chung, an actress with an interesting and diverse career.

Even if you're not a comics reader, your Batman senses may have been pinged by Chung's character's familiar surname. Kim Basinger played a journalist by the name of Vicki Vale in the 1989 Batman movie. Vicki is a long-running DC comics character. In the Gotham universe, Valerie is meant to be Vicki's aunt. So though this character is essentially original, the actress is still contributing to the legacy of a very important female figure in comics.

Loving Valerie so far? Here's what you ought to know about the woman who plays her. Read on for some important facts about Jamie Chung.

She Once Lived In A House With Seven Strangers

You read that correctly. Jamie Chung was a housemate on the 2004 season of The Real World when the San Francisco native was just 20 years old. Later, she took part in The Inferno II season of The Real World/Road Rules Challenge as a member of the "Good Guys" team. Think about all the aspiring actors who've come through that show, but never managed to made a name for themselves in the industry. Chung is a true reality TV success story.

She Played A Warrior Princess On TV

In 2012, Chung was cast as Mulan in the ABC fairy-tale series, Once Upon A Time. Not only did she wield the Chinese heroine's sword with skill and panache, Chung also participated in a fan-favorite LGBT storyline. Her Mulan was in love with Princess Aurora. Her other acting credits include Premium Rush, Big Hero 6, and Grown-Ups.

She Had A Halloween-Themed Wedding

Last year, Chung married fellow actor Bryan Greenberg (How To Make It In America, Friends With Benefits) in the midst of a three-day-long fall fun extravaganza. People reported that guests attending the rehearsal dinner and after-party were asked to wear their Halloween costumes for the occasion. As you can see from her Instagram, the ceremony itself was all class.

Her Style Blog Is #Goals

If you want to feel home decor, style, and general life envy, head over to the actress's style blog, What The Chung. You can shop her favorite new buys or just drool over photos from her casually fashion-forward life. She even hosts giveaways, so you may be lucky enough to snag some swag just for dropping by.

Valerie Vale is making a name for herself in Gotham City, and Jamie Chung seems poised for a major breakout as well.