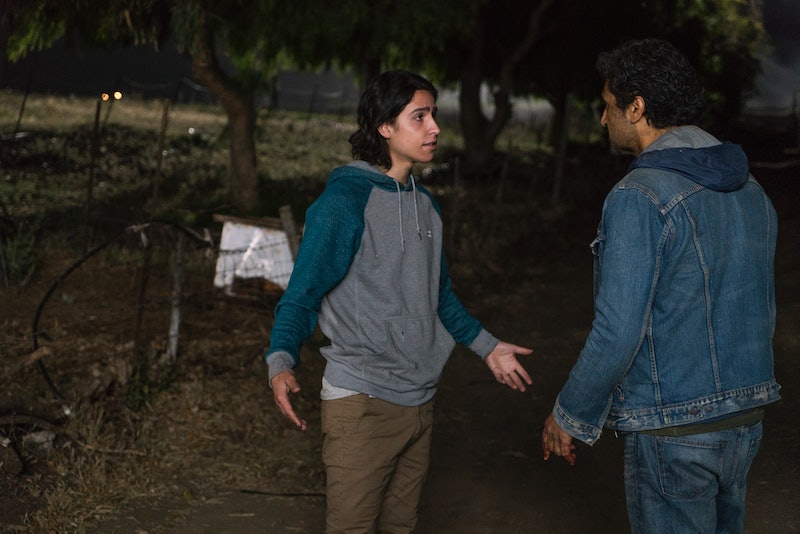 Surprise surprise, Brandon and Derek are not great babysitters. After abandoning his dad to roll with the popular kids, Chris is dead on Fear The Walking Dead and Travis finally joined the apocalypse and avenged his son by beating his murderers to death. It's a moment that fans have been waiting for, but it came at a price. Plus — what happened in Madison's past? In a private moment with Travis, she basically confirmed what we believed all along.

After lashing out at the boys who took advantage of his son in more ways than one, Travis was in shock, and then confessed to Madison that he didn't regret what he did. Not only did Madison understand, but she told him that while the apocalypse may have brought out this side in him, she was already like that before the world ended. Clearly, lying to her children about her husband's death is not the worst of Madison's sins. I can't wait to find out what Madison has seen and done when Fear The Walking Dead returns for Season 3.

Still, this moment was the most significant for Mr. Manawa. Travis had obviously shot his infected ex-wife before, but this was a different kind of kill. It was driven by grief and anger, not necessarily called for, but not necessarily a bad move either. Brandon and Derek could not be trusted, they killed Chris, and they probably needed to go. That said, Travis wasn't the first person to take a major step in the apocalypse. Alicia finally stepped up and made her first kill as well.

This is good, because our little family is on the road again and needs to be prepared for everything. They were kicked out of the hotel, tragically leaving Strand behind, and started searching for the lost members of their family. I'm not even going to talk about the post-apocalyptic "brain surgery" that went down before they left. In true Walking Dead universe fashion, the group made it to La Colonia just too late to find Nick. I'm honestly sad to lose Chris. He may have been annoying at times, like an extreme version of Carl Grimes, but his perspective was important in the group. At least he was able to impart some wisdom before he left. Travis is on a journey on Fear The Walking Dead, and this season finale was an important step.