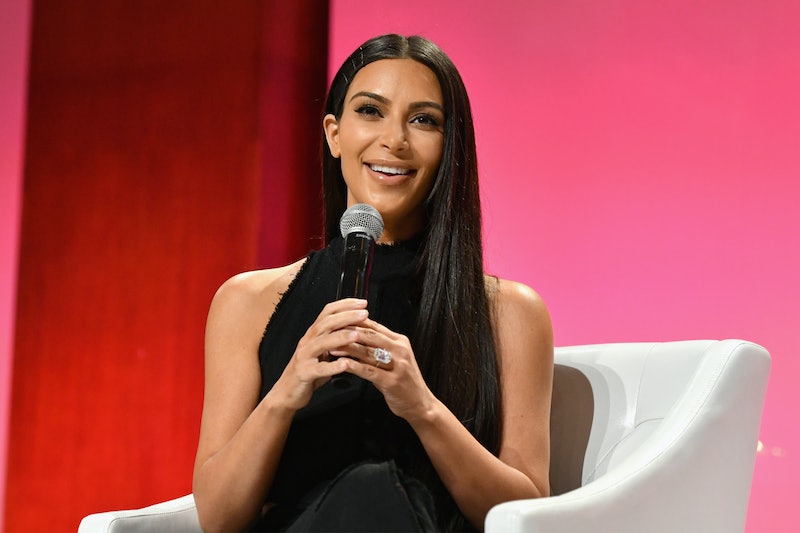 As reports come in about Kim Kardashian West being held at gunpoint in Paris — an incident reported on after her husband Kanye West cut a show in New York City short due to a "family emergency" — allegations and rumors about the incident have taken Twitter by storm. But was Kim Kardashian robbed in Paris? Kardashian West did reportedly have several million dollars worth of jewelry stolen by armed gunmen, but the property loss is much less important than the startling facts about the incident itself.

In a statement, Kardashian's spokesperson confirmed to Bustle, "Kim Kardashian West was held up at gunpoint inside her Paris hotel room this evening by two armed masked men dressed as police officers. She is badly shaken but physically unharmed."

At the time, Kardashian was not alone in Paris. Instead, she was joined by some of her closest family members: mother Kris Jenner and sisters Kendall Jenner and Kourtney Kardashian. According to E! News, a source said, "There's a lot happening right now to make sure everyone is safe."

The event is even more troubling given an incident that happened just a few days prior, when assault-prone celebrity "prankster" Vitalii Sediuk reportedly attempted to kiss the TV star's butt. Clearly, Kardashian West has had a traumatic trip for this year's Paris Fashion Week.

When incidents like this happen, many often jump to quantify the losses suffered by the victims of armed robbery, questioning how much the goods were worth, whether it was insured, and if the person in question will replace them. While this is certainly noteworthy, our culture's obsession with both fame and wealth has the tendency to make these kinds of crimes seem somewhat less human because their victims are larger-than-life celebrities.

What's worse in this incident is that Kardashian and her family are perceived as "famous for being famous," a charge that encourages many online to revile the stars. As a result, people are actually joking and jeering about the robbery. One needn't be a fan of the Kardashian-Jenners to recognize that this is an egregious and terrifying violation, and to make fun of it due to the reportedly-undeserved fame and wealth of the victims shows just how perverted our culture has become when it comes to celebrity.