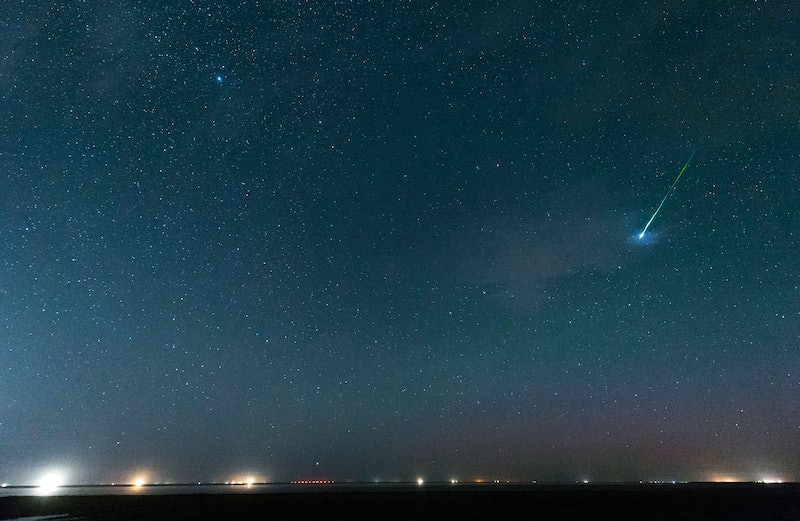 If you've been looking forward to an evening under the stars, you're in luck: The Draconid meteor shower peaks for 2016 on Oct. 7, meaning it's just a few days away. According to Time and Date, the Draconid meteor shower sometimes also goes by the name of "the Giacobinids," and supposedly looks like meteors are flying out of the mouth of a dragon. The dragon in question is Draco the Dragon, a northern constellation. Pretty epic, right? Definitely worth setting aside some time for stargazing!

For those of us who live in the Northern Hemisphere, including the United States, Canada, Europe, and northern Asia, it should be pretty easy to see the Draconid meteor shower. Interestingly, unlike many meteor showers which are most visible after dawn breaks, it's generally best to see the Draconid meteor shower in the evening. According to EarthSky, the Draconids are most visible right after nightfall; exactly what time that is depends on where you live, but to give you a general idea, sunset in Washington, D.C. on Oct. 7 will be at 6:41 pm EST.

Provided you can get to an area with clear, open sky this makes viewing the shower the perfect fall date or hang out with your friends because it's visible at a time when everyone will still be awake. Watching the meteors fall through the sky on a crisp fall evening is the ideal setting if you are feeling reflective.

Indeed, as explained over at EarthSky, the Draconid meteor shower can be a quiet one. The meteors sometimes move through the sky at a notably slow rate of a handful or so per hour. However, if the dragon "wakes up," you can definitely expect hundreds or even thousands of meteors per hour. EarthSky notes, though, that this year's meteor shower may be slightly obstructed by a waxing crescent moon — so while you still may see meteors, you might not get the full, unobstructed effect.

The Draconids can also be somewhat surprising, though. Back in October 2011, viewers saw an astounding 600 meteors per hour, even though conditions were not ideal because the moon was super bright.

It's nice to be hopeful, but you might be best off not setting your heart on seeing a repeat of 2011. Instead, plan on leisurely meteors that grace your sky for a couple of hours while you recline back on your favorite picnic blanket and enjoy the nature around you. It's still a win-win situation!