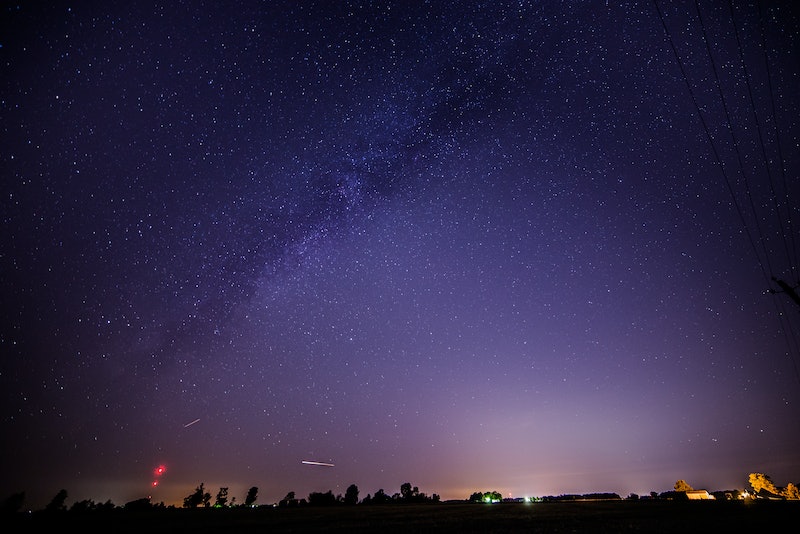 With winter approaching, it may soon be too chilly for stargazing, so you should take advantage of this week’s Draconid meteor shower and find some time to stare up at the sky. What is the Draconid meteor shower? It’s an annual meteor shower that will peak this year on October 7. The Draconids (also known as the “Giacobinids”) are often unpredictable, so here’s hoping you’ll get to see some sweet meteor action on Friday.

The Draconid meteor shower is so named because it seems to radiate out of the head of the constellation Draco the Dragon. (Can I take a moment to point out that space is cool? “These meteors fly from the head of a star-dragon” is a pretty badass thing to happen.) The Draconids are a product of the debris left behind by Comet 21P/Giacobini-Zinner. When the Earth’s orbit crosses the orbit of the comet, the debris (made up of dust and ice) burns up in our atmosphere, creating the blazing meteors.

The visible display from the Draconid meteor shower varies from year to year; some years are quiet, while others offer a huge abundance of meteors in the sky. In 1933 and 1946, for example, stargazers saw thousands of meteors flying by every hour, and in 2011, people in Europe were able to see more than 600 per hour. This year should be a fairly slow one; folks looking for the meteors probably won’t see more than a few per hour. (But that's OK, right? What's nicer than sitting outside on a blanket with friends, sipping hot beverages from a Thermos, and looking for meteors?)

If you’re in the United States, you’re well positioned to see the shower, as it is most visible from Europe, the United States, Canada, and northern Asia. To see the Draconids, find a place that is away from the cities and artificial light. Bring a blanket or chair to sit on, and look up. EarthSky suggests pointing your feet to the North or Northwest, but, since the meteors fly in all directions, you should be able to see them whichever way you’re facing. For the best chance at seeing the Draconids, plan to watch right as the sunset transitions into nightfall. (To find out exactly when the sunset is in your area, you can use this handy Sunrise and Sunset Calculator.)

Hopefully, you’ll get your fill of Draconids on Friday, but if you’re still hungry for meteors after this week’s display, you’re in luck: There will be another meteor shower this month, the Orionid meteor shower, which peaks around October 20. Happy stargazing!