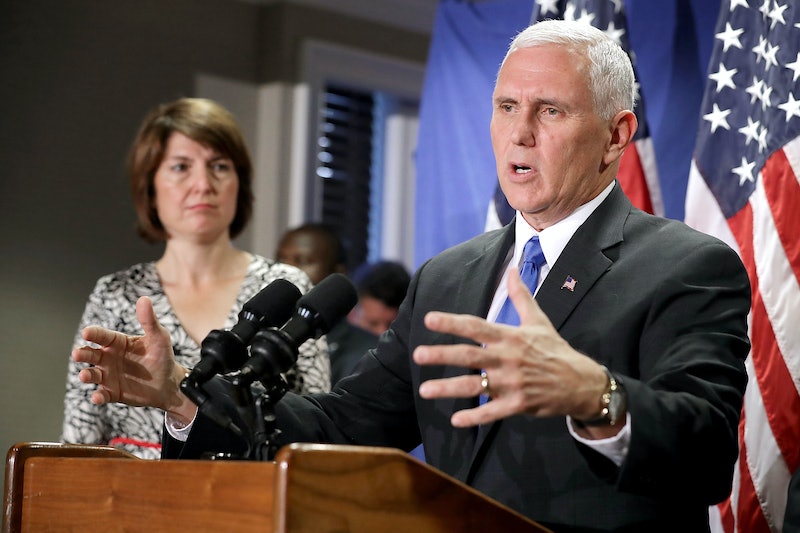 On Tuesday night, Republican vice presidential candidate Mike Pence will take to the debate stage to face off against his Democratic opponent, Tim Kaine. Donald Trump's running mate has generally kept a low profile ever since the awkward announcement of his addition to the ticket, with the most noteworthy exception being a cringeworthy visit to a barber who cut Pence's hair without recognizing him. Tuesday evening's debate, then, will mark Pence's introduction to many voters.

It is all but guaranteed that Pence will try to present himself as a levelheaded counterpart to Donald Trump, to reassure voters who worry that the Republican nominee's temperament makes him unfit for office. However, the appearance of respect can be a very different thing from respect itself, and no matter how unruffled Pence seems during the debate, female voters shouldn't be fooled. A Mike Pence vice presidency would be nothing less than a disaster for women.

During his long career in Indiana government, Pence has made his contempt for women's equality and reproductive rights clear. In one editorial, he chastised working mothers: "your day-care children get the short end of the emotional stick." In another, Pence cited Disney's Mulan as part of an argument against allowing women in the military, calling it "liberal propaganda." Seriously. Mulan.

Pence's crusade against abortion access has long been one of the defining aspects of his political career. Planned Parenthood president Cecile Richards told Politico: "He's the only [politician] I know of who has been so completely obsessed with Planned Parenthood. This just seems to be an enormous focus of his." Richards' statement seems borne out by Pence's career. In the House of Representatives, for example, he threatened to shut down the government over Planned Parenthood funding. Pence's history of anti-abortion activism, coupled with Trump's comments about "punishment" for women who have had abortions, paints a harrowing picture for the future of women's health.

Pence's statements about contraception are even more disconcerting. BuzzFeed uncovered a 2002 interview in which Pence stated that condoms are a "poor defense" against sexually transmitted diseases, which is a dangerous and patently untrue claim. The idea that a man one step away from the presidency could refer to calls for safe sex as a "sad day," as he did in that 2002 interview, should give every woman — and frankly, every American — pause.

Anyone from outside Indiana who was familiar with Mike Pence before his appointment to Trump's ticket probably recognizes the hashtag #PeriodsForPence, used by Indiana women after then-Governor Pence signed into law a ridiculous bill requiring that miscarried and aborted fetuses be cremated or interred. The abortion law was subsequently struck down in court, but Pence's preoccupation with limiting or eliminating abortion access is clear.

If, as Slate has suggested, Trump sought a vice presidential candidate to handle policy matters for him, Mike Pence would serve as acting president. The position would give him unprecedented access to further his anti-choice, anti-LGBT agenda. One of the most powerful men in the country would oppose women in combat and the very existence of working mothers. Women across the United States, then, should be watching Mike Pence very carefully on Tuesday night, and in the weeks to come.