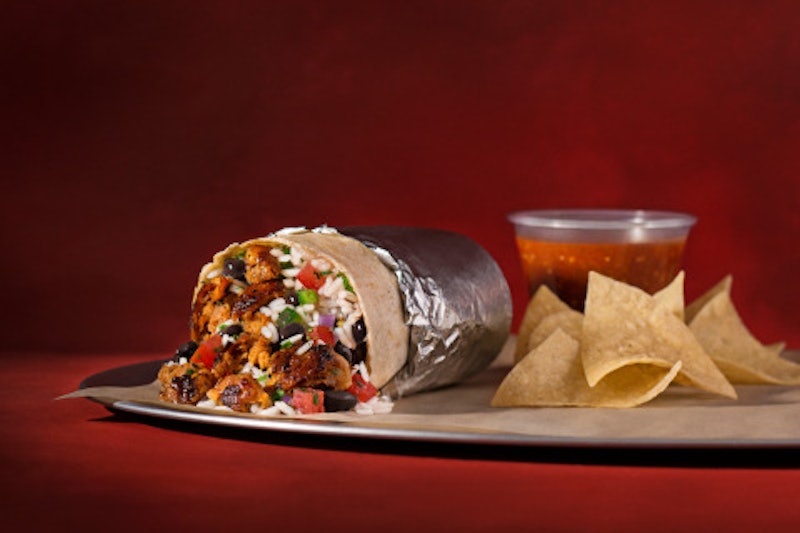 Great news for Chipotle fans — especially those of you who are ultra-regulars: Beginning Oct. 4, Chipotle will begin offering a new protein options — chorizo! — at all locations nationwide, just in time for National Taco Day. So what's in Chipotle chorizo? Just, like, really, really good tasting stuff. Like, I'll elaborate, but generally it's good... stuff. Lots of stuff. That tastes good. Basically, your burrito isn't going to know what hit it.

Though the specific ingredients in chorizo tend to differ based on where it's being served — as The Kitchn notes, Mexico, Spain and Portugal all have distinct traditions — chorizo, broadly, is a spicy, smoky pork sausage, which has been somewhat co-opted by American cuisine as a "breakfast burrito" filler. It can be served whole, sliced or ground, and is generally, uh, amazing. And also not just for breakfast, of course; it's pretty much always a good time for chorizo.

So what's in Chipotle's version of chorizo, exactly? Here's how the ingredients break down:

You can't have chorizo without pork. It is literally a fact.

I don't usually think of paprika as being spicy, but apparently it's made of capsicum pepper. Go figure.

Then, after all that goodness has been combined together, it's seared on the grill for that perfect amount of char.

The arrival of Chipotle chorizo has been a long time coming. In 2015, it became available as a test item at Kansas City, Mo.'s 33 locations, much to the excitement of Chipotle Corporate Chef Nate Appleman, who told the Kansas City Start at the time that he had been been "beating the drum" for chorizo since he first joined the company. This past June, it was rolled out to Columbus, Ohio; Manhattan; Denver, Co.; and Sacramento and San Diego, Calif. Now, finally, as the weather gets cooler and we prepare to hibernate, chorizo will be available to all, whether you like salads or burritos or burrito bowls or tacos.

And, like, can I just make a suggestion? Brunch at Chipotle? Like, late morning chorizo burrito at Chipotle instead of waiting an hour for watered down mimosas because summer has passed and we have more important things to do with our time now that the days are about to get scary short and very cold? Just think on it.