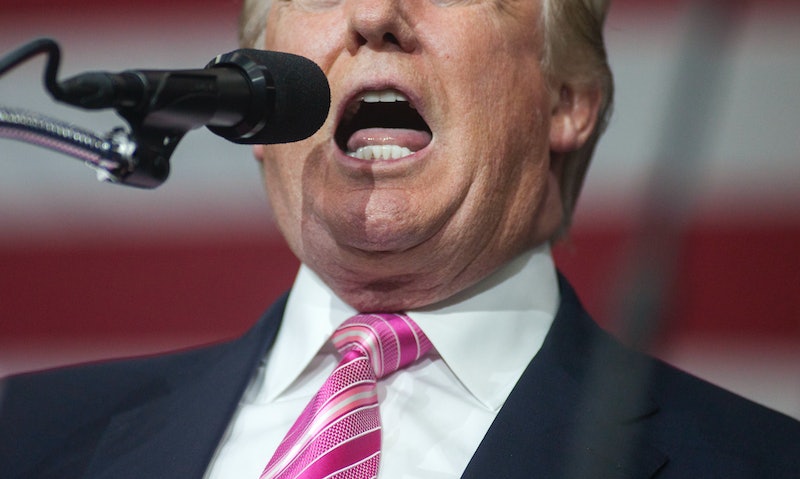 At a forum on veterans Monday morning, speaking about veteran suicide, Donald Trump said of veterans requiring mental health help: "They see things... a lot of folks in this room have seen... and you’re strong and you can handle it." He then added, "But a lot of people can’t handle it.”

The Republican presidential candidate was speaking at the right-leaning Retired American Warriors Political Action Committee when he was asked about the role of the Veterans Administration in preventing suicide and divorce, specifically by taking advantage of religious programs and increasing the role of chaplains in the VA.

“We need that so badly,” he answered. “When people come back from war and combat, and they see things that maybe a lot of the folks in this room have seen in many times over, and you’re strong and you can handle it, but a lot of people can’t handle it...” suggesting that “strong” vets don’t need mental health help following combat.

The GOP nominee also made reference to the oft-cited statistic that 22 veterans commit suicide every day, asserting that, "A lot of the suicide is [because] people can’t get to see doctors, because the waits are so long."

The question Trump was responding to also made specific reference to various conditions that affect veterans returning from combat. Staff Sergeant Chad Robicheaux, who founded the faith-based veteran support group Mighty Oaks Warrior Programs, asked Trump if he would “support and fund a more holistic approach to solve the problems and issues of veteran suicide, PTSD, TBI [Traumatic Brain Injury], and other related military mental and behavioral health issues,” specifically through spiritual and faith-based programs. While ultimately coming out in support of increased mental health assistance, Trump’s answer calls to mind many of his problematic comments both about mental health and the military.

Throughout his campaign, Trump has made disparaging comments about his opponents, using mental health as an insult, calling Sen. Bernie Sanders “crazy” and Glenn Beck a “mental basket case,” and suggesting that Sen. Ted Cruz was having a “mental health crisis.”

Regarding veterans, in July of 2015, just weeks into his presidential campaign, Trump refuted the idea that onetime GOP presidential nominee Sen. John McCain, who was held as a prisoner of war in Vietnam for five and a half years, was a war hero. “I like people who weren’t captured,” Trump said.

Trump, who has claimed he knows “more about ISIS than the generals,” received five deferments from military service during the Vietnam War. Despite this, in a poll from early September, he led Clinton in military support by 19 points.