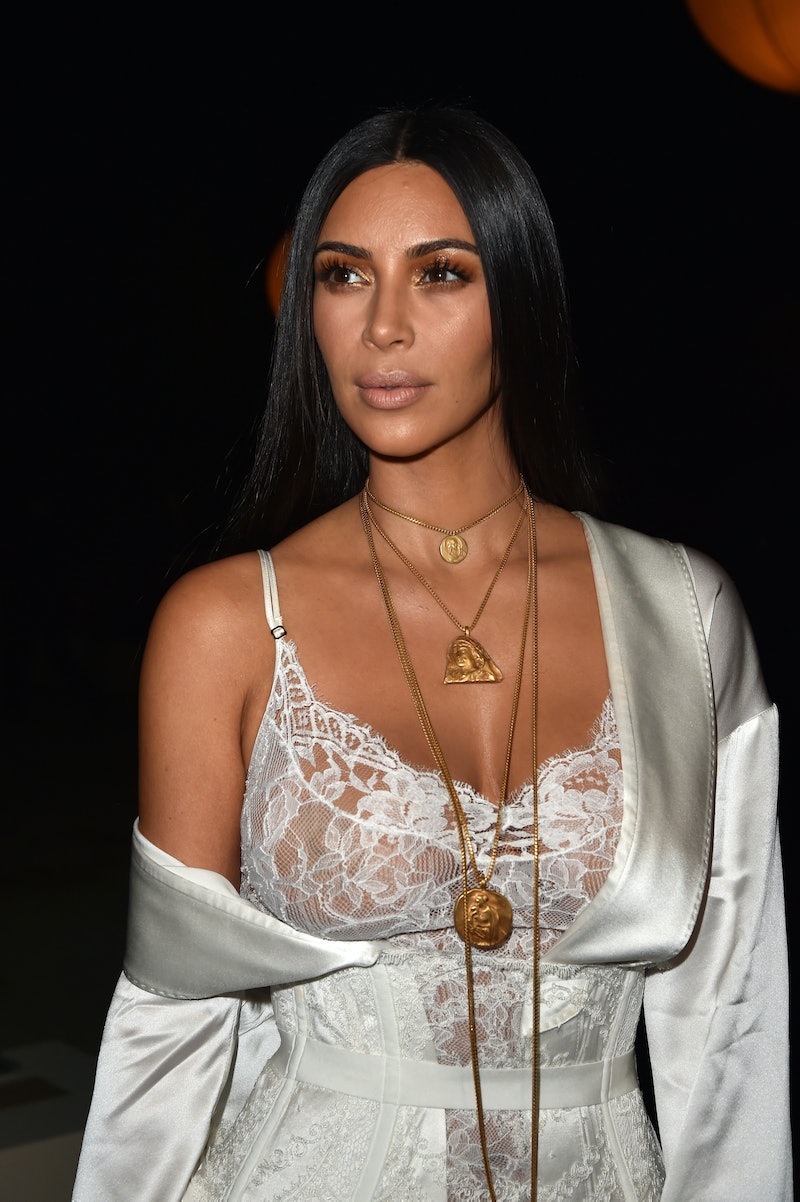 After a terrifying ordeal in which she was robbed and held at gunpoint in Paris on Sunday night, Kim Kardashian is now back in the U.S. and armed with an enormous team of security. According to TMZ, Kardashian touched down in New York on Monday morning, reuniting with husband Kanye West, who was in town over the weekend to perform at the Meadows festival in Queens on Sunday. (Upon learning of the robbery, West promptly canceled the concert due to a "family emergency," he told the crowd.)

Paparazzi photos and video show Kardashian and West — along with her mom, Kris Jenner, and Jenner's boyfriend, Corey Gamble — exiting a black car in Manhattan, surrounded by "a caravan of about 10 vehicles with 15-20 bodyguards watching everything and everyone in the area," TMZ points out. The New York Police Department — as well as Kardashian's bodyguard, Pascal Duvier, who was not with Kardashian at the time of the robbery — was also in attendance.

Kardashian's spokesperson confirmed the Sunday robbery in a statement to Bustle.

"Kim Kardashian West was held up at gunpoint inside her Paris hotel room this evening, by two armed masked men dressed as police officers," Treciokas said. "She is badly shaken but physically unharmed."

To say that Sunday night was a frightening ordeal for Kardashian would be putting it mildly. According to an E! News source, the KUWTK star was "gagged and bound at her hands and feet, then handcuffed and held at gunpoint."

"She begged for them to let her live and [said] she has babies at home," the insider told E! (North and Saint West were reportedly not with Kardashian at the time of the robbery). "Then they wrapped her mouth in tape and put her in the bathtub. She thought they were for sure going to kill her."

After the intruders allegedly robbed her of close to $11 million dollars of jewelry and two cell phones, Kardashian "broke out of her bindings and got out," the source stated.

Bustle has reached out to Kardashian's rep for a statement regarding these claims, but has not yet heard back.

At the time of the robbery, Kardashian's bodyguard Pascal Duvier was with Kourtney Kardashian and Kendall Jenner at a club in Paris, the Daily Mail reported. The number and whereabouts of the rest of her security team has not yet been reported.