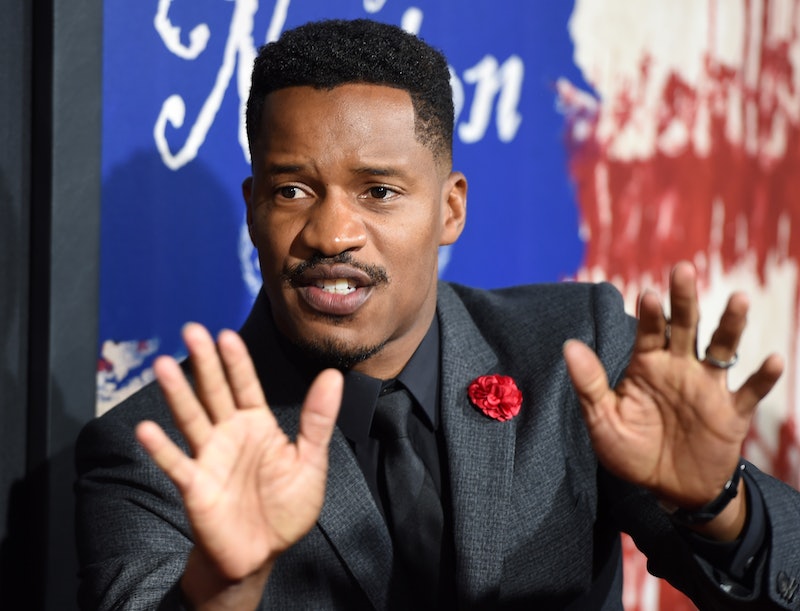 As The Birth of a Nation approaches its Oct. 7 release date, there's been a lot of talk about the film's writer, director, and star Nate Parker — specifically about the rape allegations in his past. Every detail that comes out about this tragic case makes it more difficult to discuss, and that includesMonday's episode Good Morning America. During an interview on the morning show, Nate Parker said he won't apologize for the rape allegations in his past. He was on the program to promote The Birth of a Nation, a historical drama about the life of Nat Turner, the enslaved leader of an 1831 revolt. However, as has happened so many times during this promotional tour, the topic quickly turned to Parker's own past. If his response is any indication, the director is just about done answering questions about the 1999 case.

"I was falsely accused," he told the GMA anchors. "I was proven innocent, and I’m not going to apologize for that." Parker was 19 and attending Penn State University when a fellow student accused him and his roommate Jean Celestin, the film's co-writer, of raping her as she lay unconscious in their room. Both men claimed that the sex was consensual, and Parker was acquitted of the rape charges. (For his part, Celestin was convicted, but that conviction was ultimately overturned after the accuser was no longer willing to testify for the 2005 retrial.)

Tragically, the unnamed woman committed suicide in 2012, an aspect of this heart-breaking case that makes Parker's statement on Good Morning America stand out all the more. He had previously told The New York Times that he "welcomed the conversation," but appears to have changed his mind. He now tells GMA that, while he "feels terribly" about the entire situation, he's more interested in a different story: Nat Turner's.

"I think the important thing, you know, is this isn’t about me. The story of Nat Turner as an American, as American people, the story about a man who was erased from history, at some point. I think that’s where our focus should be."

Underlying all of this, of course, is the fact that Parker was tried and found innocent of any wrongdoing in this case. Since he was acquitted on all charges, he would of course feel that he deserves the chance to move on with his life. But seeing him discuss with such compassion a man who was erased from history makes me wish he could extend the same consideration to the unnamed woman in his past.