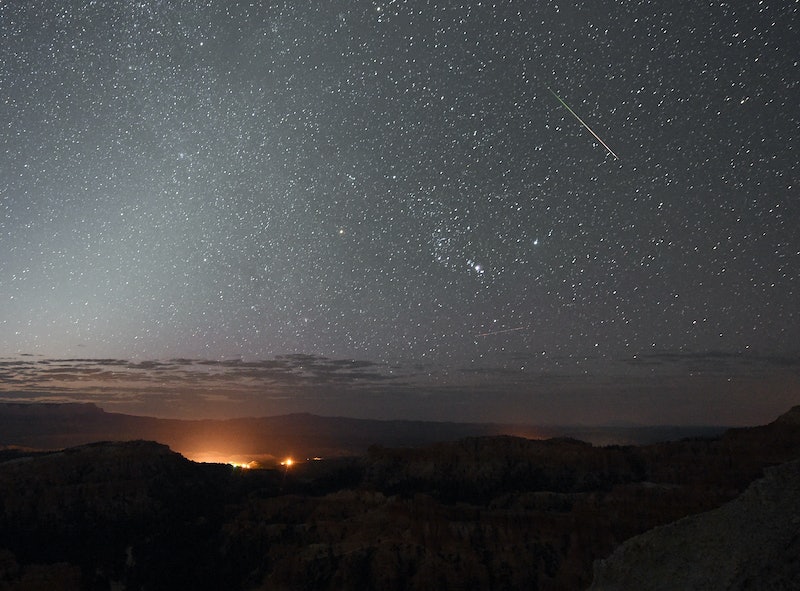 Fall is here, the air is crisp, the leaves are vibrant, the smell of charring wood is heavy among us — it's not only the best time to enjoy being outside, but it's also the last time you can comfortably be outside, before everything becomes frigid and bare. So this weekend, get a blanket and hang outside where you can see the Draconid Meteor Shower and have an epic fall night hang under the sky.

The Draconid Meteor Shower will have its annual peak occurrence on Friday, Oct. 7, 2016. It's one of two awesome meteor opportunities in October, with another chance to catch some sky magic on Oct. 21, 2016. And while there has been a lot of talk of sky-watch worthy events over the last month, what with the moon basically doing a weekly cabaret show of hard-to-see illusions, this meteor shower will not disappoint. All you need to see it is a pair of opened eyes and a sweet, comfortable set up where you can sit back, relax and watch the sky instead of the TV for a night. Yes, that's right, this Friday you're binge-watching space.

The Draconids owe their namesake to the constellation Draco the Dragon (the eight largest constellation in the sky) and are a fan favorite among seasoned star-gazers as they have a history of putting on a good show. They occur when when the Earth passes through the dust debris that is left by a comet called 21 P/ Giacobini-Zinner.

In case you're not totally familiar with what a meteor shower is, it's basically just a shooting star visual effect that occurs as debris burns off of a comet as it gets closer to the sun. The particles burn up before ever reaching us, which is doubly lucky for us —we get to watch the spectacle of the burn-off and stay safe from getting hit by any debris. These events don't occur all the time, but do occur on the schedule of various orbits — they're not random.

People who live in Northern America, Europe, and Asia have the best seats to the show, but people in the Southern Hemisphere will also catch a glimpse of some of the action this Friday. Though officially the shower is on Oct. 8, you'll see them the best if you look on the evening of Oct. 7 — specifically around sundown. There's no telescope or coordination necessary to catch this show. Because the meteors are on the move, you can simply head outside just after the sun sets, before the dark settles in and look up. You don't have to be in any special position or look in anyone direction. If you're scanning the sky just at this time on this very day, you should be able to see something truly spectacular.