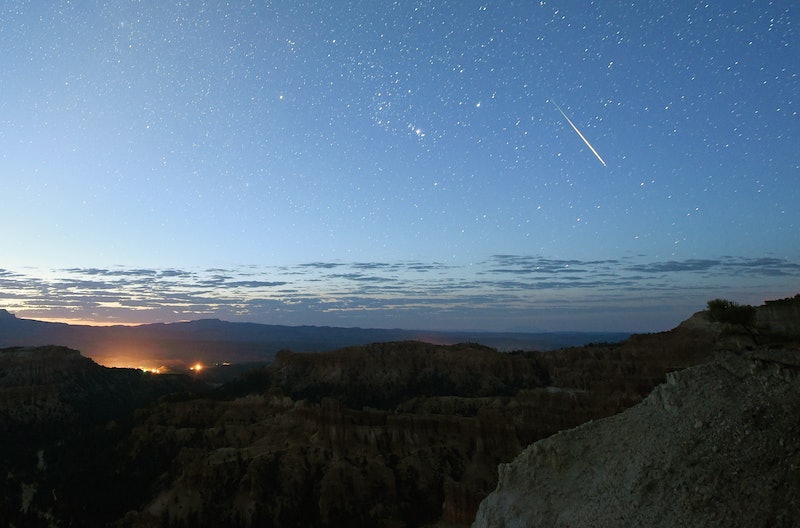 Just because a meteor shower happens annually doesn't make it any less magical; indeed, history tells us that the Draconid meteor shower is a hit-or-miss each year, which just adds to the allure. Sometimes, the star show is absolutely wondrous and produces tons of meteors for us to fawn over, as it did in 1933 and 1946; other years, though, have been a little more anti-climactic.

The nice thing is that you don't actually have to find Draco the Dragon in the sky in order to enjoy the meteor shower, since these meteors "fall down" in all directions. Here's what you need to know for upping your chances of getting a glimpse at a shooting star or two this year:

A lot of meteor showers require an early trek out of bed before dawn, and since you may or may not see a bunch of falling stars, the morning struggle may not be worth it for some people. Luckily, the best time to view the Draconid meteor shower is in the early evening right after sunset. Cancel those dinner plans, find out when sunset is for your area on Oct. 7, and bring your friends along. What's a better way to enjoy a Friday night than watching a bunch of stars shoot out of a dragon's mouth?

2. Get Away From Town

Fall is probably the coziest season to go stargazing. After all, you get to bundle up and drink hot chocolate without having to worry about mosquitoes eating your legs. To watch the Draconid meteor shower, drive away from any sort of light pollution so it's easier to see the shooting stars. A grassy field works (although again, go with a couple of pals so you're not just lying in a field alone at night — that could be a little scary). It's also worth noting that the people who are most likely to see the meteor shower are those who live in the Northern Hemisphere, including the United States, Canada, Europe and even northern Asia, so you might want to make sure you're located in one of those areas.

As I mentioned previously, you'll probably get to see the Draconid meteor shower from any direction. But if you're sitting up, watch the sky in the north or northwest for best results. If you're lying down, just gaze straight up.

4. Try Again The Next Day

This meteor shower averages around 10 to 20 meteors per hour, which isn't much. If you didn't see any meteors on the first night (or if you simply want to see more), you might have some luck the day after on Oct. 8. There's still a chance that you'll be able to catch one or two falling stars. Staying out two nights in a row isn't too much to ask for — this meteor shower only happens once a year, after all!

More like this
Why Experts Say Sleeping With A Fan On Isn’t Totally Risk-Free
By Sophie McEvoy
The 6 Best UV Umbrellas, According To A Dermatologist
By Rachael Green
The 8 Best Indoor Door Mats For Your Home
By Jenny White
Your Daily Horoscope August 11, 2022
By Mecca Woods
Get Even More From Bustle — Sign Up For The Newsletter