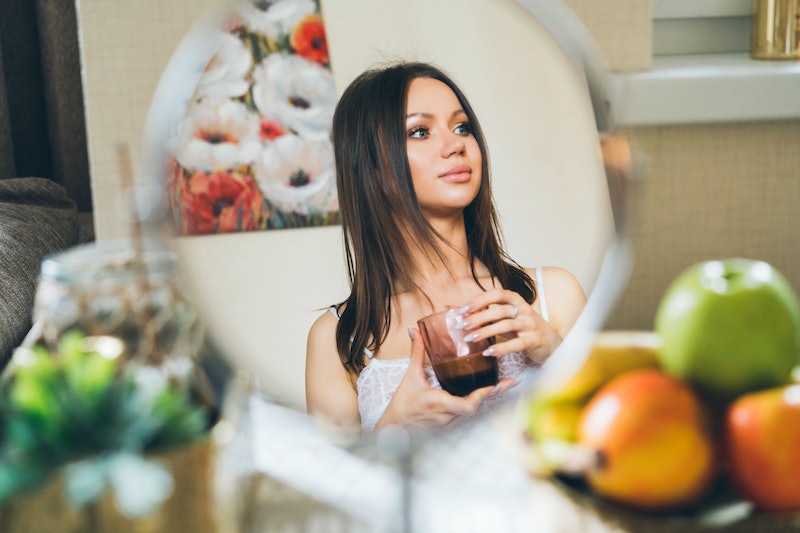 There's been a lot of research in recent years on what narcissism is and who qualifies as one — and although it might manifest differently for different people it turns out that those with the trait may have something in common: According to a new study, narcissists have trouble retaining friendships. "Retaining" is the key term here; indeed, the study also found that narcissists are actually initially quite popular when they meet new people. Over time, though, the relationship may sour, and the trait itself might have something to do with it.

While we tend to talk about narcissists in the past tense, such as the ex you are so glad you broke up with, or the relative you cut ties with, narcissists tend to be really positive presences in our lives when we meet them. For example, narcissists are often great at making friends, charming interviewers, and scoring a second date, but as time passes, their ability to maintain close bonds seems to waiver.

That's where this latest research comes in. In a study of 170 undergraduate students in Poland, scientists examined the level of popularity of students during their first week of school, then checked back in three months later to see who had retained strong friendships. Additionally, prior to these popularity checks, the students had been assessed for narcissism and emotional intelligence. People who scored highly on narcissism were found to be quite charming and popular at the start of the school year, but a big drop occurred after the three-month check-in. This suggests that people who score highly on narcissism, while initially charming and sociable, may not actually turn out to be the best friends you've been waiting for.

Philip Leifeld, co-researcher of the study, explained this phenomenon to Sirin Kale over at Broadly: "On first impression, narcissists are successful in finding friends, but over time the pattern is reversed. The less narcissistic you are, the better you are at finding friends," he said. This suggests that people who may be a little more reserved and less popular at the start of the year may have a better time developing deeper friendships later on.

Furthermore, if you're someone who takes a bit of time to warm up to people, the study's results might actually suggest good things about your rate of relationships. As Leifeld explained, "The reverse pattern is true for emotional intelligence. Emotional intelligence doesn't initially help you to be identified as a potential friend, but over months people will appreciate the personality trait and seek out your friendship."

Narcissism often manifests in common symptoms such as a disregard for the feelings of others, the inability to handle criticism, a sense of entitlement, and a desire for constant praise and admiration. Unsurprisingly, these traits can make it difficult to form bonds or have healthy, long-term relationships because they can create an unhealthy dynamic between you and others. Interestingly, though, previous research has found that people with narcissistic tendencies tend to get along well with other narcissists — so perhaps the current research is merely just one part of the puzzle for how narcissists relate to other people.

Although it tends to get a bad wrap, narcissism also has its benefits, too, just like any other trait; unlike people with psychopathy or Machiavallianism, for example, narcissists don't tend to isolate themselves, and they tend to have a stronger subjective sense of well-being. But if you find you're having trouble retaining your friendships, maybe it might be time for some self-reflection. After all, friendships go both ways.

More like this
This Psychological Effect Might Be Keeping You From Hitting Your Goals
By Lexi Inks
10 Ways To Be More Empathetic To Your Partner
By Raven Ishak and Lexi Inks
The 19 Best Tweets & Memes About Bisexual Awareness Week
By Lexi Inks
Are Quality Time & Gift-Receiving Love Languages Compatible?
By Lexi Inks
Get Even More From Bustle — Sign Up For The Newsletter