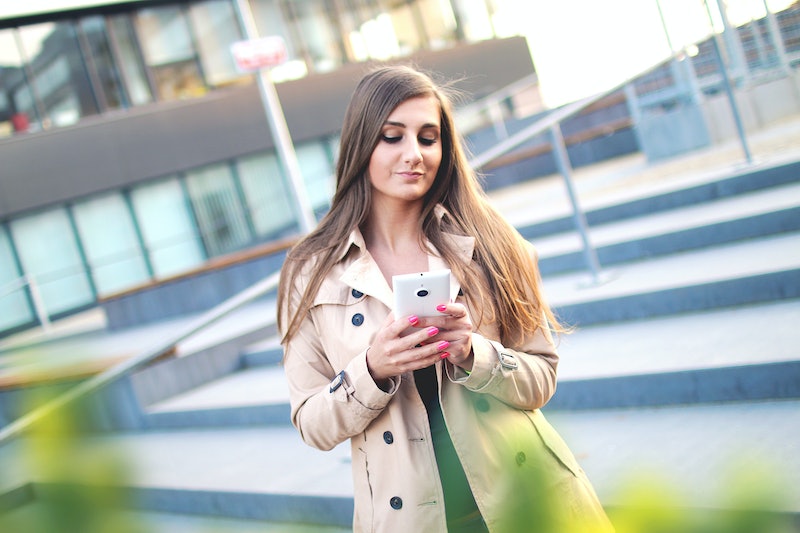 We all probably think we know a narcissist when we see one. They're the person who seems totally in love with themselves, right? But the reality is there are often signs that you're dealing with a narcissist that are way more subtle and nuanced than an obvious show of self-admiration.

In a piece for Psychology Today, author and professor Preston Ni noted that a true narcissist may actually love themselves the least. "Narcissism is often interpreted in popular culture as a person who’s in love with him or herself. It is more accurate to characterize the pathological narcissist as someone who’s in love with an idealized self-image, which they project in order to avoid feeling (and being seen as) the real, disenfranchised, wounded self," Ni said. Ni went on to note that, "Deep down, most pathological narcissists feel like the 'ugly duckling,' even if they painfully don’t want to admit it."

And while this may give us a better understanding of the narcissistic people in our lives, it doesn't necessarily help us identify them, which in turn, can help us cope with their behavior. If you've found yourself dealing with a difficult personality lately, and can't quite put your finger on why the person is so hard to be around, here are 11 subtle signs they may be a narcissist.

In that same Psychology Today piece, Ni noted that a classic sign of a narcissist is that they interrupt a lot in conversation. "The narcissist loves to talk about him or herself, and doesn’t give you a chance to take part in a two-way conversation," Ni noted.

2. They Call You Crazy

In a piece for MindBodyGreen.com, life coach Jennifer Kass said that narcissists "are known for what's called 'gas-lighting,' which is a form of psychological abuse employed to create anxiety and confusion, dismantling the other person's own trust in themselves and their ability to discern what's real and what is good for them." If you suddenly start questioning yourself and your choices when you usually feel like you have a pretty good sense of self, it may be because you're dealing with a narcissistic personality.

3. They Lose Interest When You Get Real

Kass also said that the narcissist will typically lose interest the second you start opening up about yourself or begin talking about your problems. So watch out if you spend hours listening to the other person talk about themselves, but then feel like their eyes are glazing over whenever you need a friend.

Ni also stressed that the narcissist can be extremely charming when they want to be, and in fact this very well could be why you were drawn to them in the first place. If you get the sense that a person turns their charm on and off depending on who they're talking to (as opposed to consistently being gregarious or extroverted), that could be a big red flag.

5. They Don't Have A Single Bad Picture On Facebook

In a piece for The Huffington Post, W. Keith Campbell, head of the Department of Psychology at the University of Georgia and co-author of The Narcissism Epidemic: Living in the Age of Entitlement, noted that the narcissist is often the person with a ton of Facebook friends, but not a single bad Facebook photo. He noted this is because the narcissist is extremely image-conscious and strives to project an idealized image of themselves to the world.

6. It's Never Their Fault

In that same HuffPost piece, Zlatan Krizan, Ph.D., an associate professor in the Department of Psychology at Iowa State University, said that when it comes to narcissistic people, you'll often begin to notice that things are never their fault. Even when they tell a story where they got in trouble, or were reprimanded at work, it will come down to how they were not being valued, or how they feel emotionally victimized. You will likely never hear, "It was ultimately my fault and I've learned a valuable lesson from the experience."

A compilation piece for Business Insider stressed the fact that as confident as the narcissist may seem on the surface, they absolutely can't handle even minor criticism and definitely can't let it roll off their backs. If you've noticed this contradiction in a friend or colleague, they could have elements of a narcissistic personality.

8. You Feel The Need To Constantly Flatter

The HuffPost piece also noted that you're likely dealing with a narcissist if you find that flattery is the easiest way to deal with them and avoid conflict. So if you feel like the foundation of your relationship is you just giving compliments and positive affirmations, it may be time to reevaluate your dynamic.

9. They Give Unsolicited Advice

In a piece for Health, psychotherapist Joseph Brugo, author of The Narcissist You Know, said the narcissist is often the person giving you unsolicited advise. "Narcissists are always a little more in the know. They seem to have the inside info on everything," Brugo said, because acting that way makes them feel more important.

In the same Health piece, family therapist Karyl McBride noted that the narcissist is typically extremely bad at waiting in lines — and just waiting for things in general. "Whatever a narcissist's needs are, they need to be met now," McBride said. "They want automatic compliance because they are that important."

The Business Insider piece also stressed that narcissists are bad sports. They get angry when they lose, and tease when they win. Needless to say, they're definitely not someone you'd want on your office kickball league...

Narcissistic people can create extremely toxic relationships in your life, but they're not always the easiest people to spot. If a person in your life exhibits some (or all) of the above behaviors, they very well could be a narcissist, and it just may be time to seek a little distance.

More like this
The Spiritual Meaning Of Angel Number 000, Explained
By Kristine Fellizar
21 Signs You're Not In Love Anymore
By Sara Altschule, Kathleen Ferraro and Carolyn Steber
These 4 Zodiac Signs Will Be Extra Lucky In October
By Brittany Beringer
10 Ways To Be More Empathetic To Your Partner
By Raven Ishak and Lexi Inks
Get Even More From Bustle — Sign Up For The Newsletter