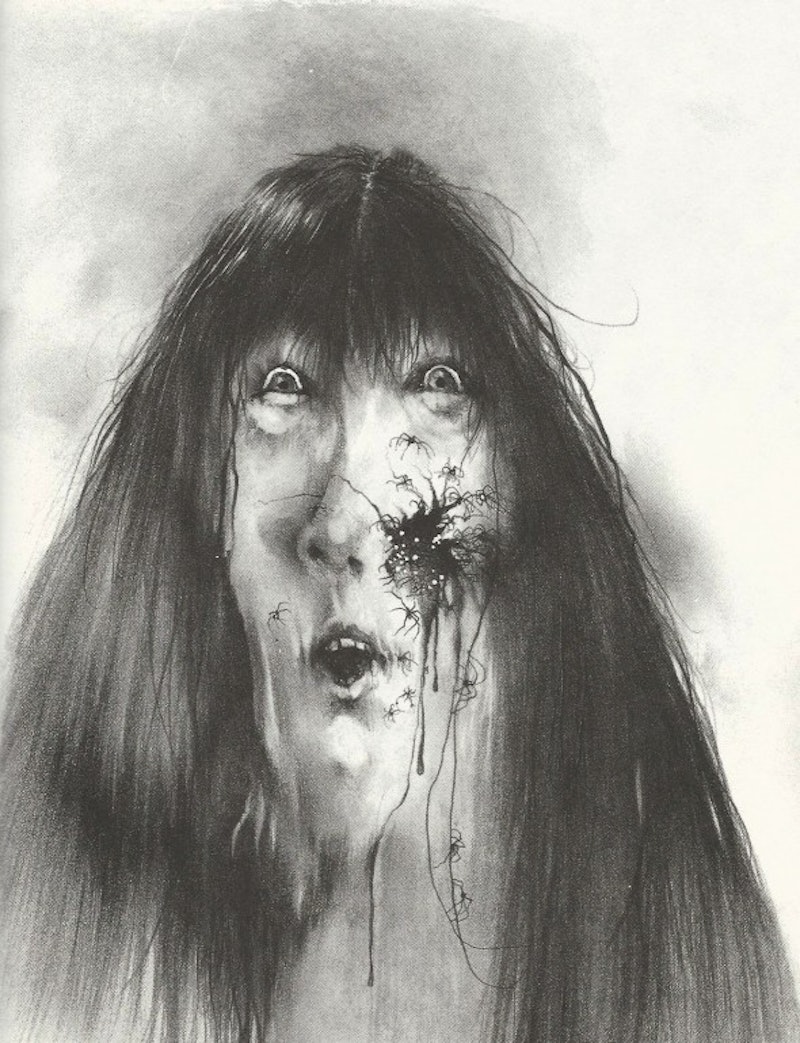 There are the scary stories that you tell around a campfire, or to keep little kids from talking to strangers. And then there are the Scary Stories to Tell in the Dark. As far as I can tell, the only point of those books was to give children elaborate, nausea-inducing nightmares. The stories, collected from folklore, featured severed hands, human sausage, spiders burrowing under your flesh, and all manner of skeletons, ghosts, and nameless, twisted monsters. And we loved every horrifying page. So get ready to dive into some repressed memories, children of the '90s: here are the scariest stories from Scary Stories to Tell in the Dark.

A few years ago, the internet went into a tizzy (as the internet often does) because the new edition of Alvin Schwartz's Scary Stories to Tell in the Dark has different, less horrifying illustrations. Diligent '90s kid that I am, I was outraged at the idea that anyone would try to change such an integral part of my childhood... until I looked through some of those original illustrations. You guys. Those pictures are too scary. Illustrator Stephen Gammell is a wildly talented madman. I'm glad future generations are safe from his beautiful, sickening art.

So, just in case you forgot how genuinely scary those stories and those original images were, here are some of the most frightening tales from the Scary Stories series:

There's nothing like the idea of spiders bursting out of your face to help you sleep at night. The Red Spot, from the third Scary Stories collection, is just cruel. Everyone is already scared of spiders. But Schwartz's story adds another, grosser element: a spider bites Ruth on the face, leaving a red spot. The spot grows worse and worse over the next few days, until it finally bursts, releasing dozens of spiders all over Ruth's face. That's not how spiders actually work... but still.

For some reason, this is the story that stuck with me the most over the years. A little boy finds a toe in his yard, and he and his parents eat it for dinner. I mean... stop right there. Why are you eating a severed toe that you found in the ground? Naturally, some kind of ghost or shambling corpse shows up looking for its missing toe. But honestly, that kid is the real monster for being so gung-ho about eating human remains.

3. May I Carry Your Basket?

Yeah, so there's a severed head in the basket. Just FYI. Sam is just trying to be nice when he offers to carry an old lady's basket, but of course the old lady is a headless corpse. And then she and her head chase Sam down and bite him. Moral of the story: never try to help anyone, ever.

So there are these two little girls, right? And they meet a third girl with a cool drum. And they really want the cool drum (you know, kids and their drums). Cool-drum-girl is all, "Sure you can have my drum... but only if you're very naughty." So the two girls start acting out, and their mother threatens to leave and send them a new mother who has "glass eyes" and a "wooden tail." The girls really want this drum, though, so of course they keep misbehaving... until they return home to find their new mother, her wooden tail thumping on the ground.

This story is actually not that scary on its own. Sam's parents pick up a new "pet" for him in Mexico, but it turns out to be a rabid sewer rat (nice job, parents). But that illustration is so grotesquely frightening, it kicks up the fear factor more than a few notches.

I have to say, I'm a sucker for a good old fashioned urban legend. Most people have heard some version of The Hook: two teens are hanging in a car, listening to a news story about an escaped murderer with a hook for a hand (like you do), and they keep hearing a scraping sound against the car door. When they get home, there's a bloody hook dangling from the handle. Classic.

Quite a few of the Scary Stories end with the "he was dead the whole time!" twist. Cold as Clay is one of them, but it's arguably the scariest. Farmhand Jim returns from the grave to visit his lady love, and she gives him a handkerchief. The next day, she and her father dig him up, and find the handkerchief clutched in his hand. And also the horse he rode is covered in clay, which is just an unnecessary, but thoroughly creepy, detail.

This one gets extra points for an especially creepy title. John finds himself walking down the street, unsure of how he got there. He tries asking a few people the time, but each of them screams and runs from him. Finally, he calls home to get a ride... only to find that his wife isn't home, because she's currently as his funeral.

Be kind to your scarecrows. These two farmers are absolutely awful to their scarecrow, Harold... until he starts grunting. Then they feel weird about Harold, and kind of just ignore him for a while. Until one day, when Harold climbs up onto the roof and starts trotting around. Finally the farmers are like, "This is... too weird," and get out of there. But one farmer returns for his milking stools, and winds up as a flayed, bloody skin stretched out on the roof to dry (he couldn't have bought new stools?).

High Beams just might be the scariest story in all three Scary Stories books... and that's with no supernatural elements and a happy ending. A girl is driving down the highway, when the truck behind her starts flicking on his high beams periodically. She's freaked out, but no matter how fast she goes, or which little side road she heads down, this guy keeps following her. Finally, she makes it home, followed by the truck, and jumps out of her car. The truck driver gets out, too, holding a gun... but it turns out he was only flashing his high beams because there was a man with a knife in the back of her car who kept reaching up to slash her.