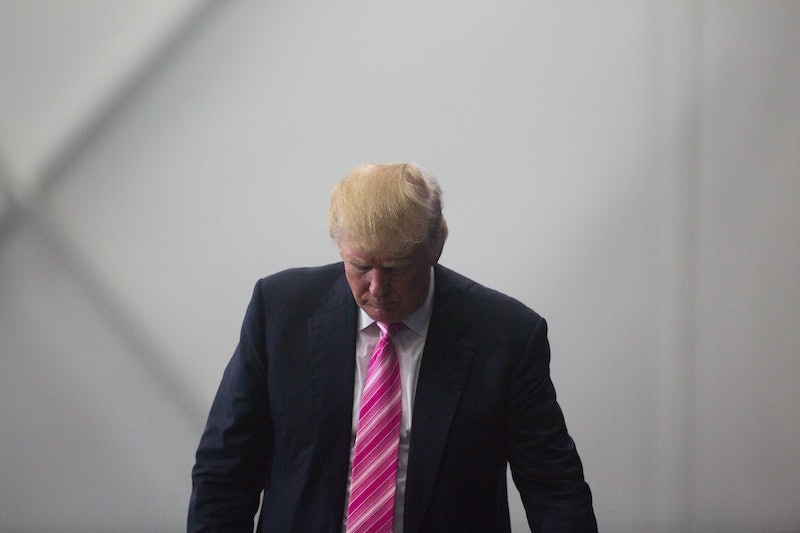 In the last few months of the presidential election, a lot of conversation has centered around Republican nominee Donald Trump's tax records — or lack thereof. Finally, on Saturday, The New York Times was able to shed some light on the situation, with a report that Trump could have legally avoided paying taxes for almost two decades.

Several alleged 1995 tax documents of Trump's that were anonymously sent to the newspaper indicate he could have used a loophole allowing net operating loss to cancel out equivalent tax. Trump's campaign responded to the allegations in a statement, saying, "The only news here is that the more than 20-year old alleged tax document was illegally obtained." The statement also highlights Trump's business mind, saying "Mr. Trump is a highly-skilled businessman who has a fiduciary responsibility to his business, his family and his employees to pay no more tax than legally required," and "The incredible skills Mr. Trump has shown in building his business are the skills we need to rebuild this country."

But if the allegations are true and Trump did avoid — even legally — being taxed, it's not OK.

Following the release of the report, Rudy Giuliani declared Trump a genius. But cheating the public out of funds is not genius — or presidential — behavior. If the report is accurate, that means Trump has duped his country out of money that could have been used for public resources, for the good of the people. By principle, this is disgusting, especially considering the hardworking Americans across the country who pay their taxes in full every year.

For months leading up to the report, Trump has claimed that he was under a "routine audit" which prevented him from releasing his returns, and in the first presidential debate he said he would release them when Hillary Clinton releases her emails. His son, however, said it wouldn't be a good idea for him to release them to the public, as it would distract from his main political message. These various and somewhat contradictory excuses led many to believe that Trump's taxes would show something he intends to keep hidden. The New York Times' report has offered up another reason for Trump's hesitancy to release them: if he took advantage of laws in place in order to not pay some taxes.

As a young journalist, I've taken positions as a freelancer where I was responsible for paying back taxes. Rather than the companies I worked for taking out the necessary taxes from my paycheck (and paying for a part of it themselves) I was at times responsible for nearly one-third of my income paid back in taxes.

In both 2014 and 2015, rather than receiving a nice tax return in April like my family and friends, I owed money. And I paid it. No, it wasn't fun. But it was my responsibility as a resident of the United States of America to contribute, and I accept that. I didn't look for loopholes to get out of it (though I did file some deductibles in 2014), and the idea that Trump could even think about weaseling out of paying his fair share is a disgrace.

Trump's campaign statement indicates that "Mr. Trump has paid hundreds of millions of dollars in property taxes, sales and excise taxes, real estate taxes, city taxes, state taxes, employee taxes and federal taxes, along with very substantial charitable contributions." Bustle has reached out to the Trump campaign for comment in regards to the allegations.

According to a report by CNN Money, the federal government uses income taxes to pay for many services benefiting the country: health programs, the Pentagon and military, interest on debt, unemployment and labor programs, veterans benefits, food and agriculture programs, education programs, government expenses, housing and community programs, energy and environmental programs, international affairs programs, transportation funding, and science funding. These essential programs and services are what Trump could be shortchanging if he's not paying his taxes. Our country deserves better than that.

Unlike Trump, I don't have a huge brand or a chain of hotels or a university, or any other of the large-scale endeavors that he's founded to make a name for himself. Trump's alleged skirting of taxes hurts people who are just trying to make a living. While Trump brags about being a great businessman worth billions of dollars, and allegedly might not have given back to a country that's offered him so much opportunity, I'm struggling to make it paycheck to paycheck.

Yet when my taxes are due each April, I don't think about how to get around them, I pay my part. I use the public resources that this country provides, and I'm grateful for them. I may not be super cheerful about giving up a third of my paycheck at times, but I'm lucky enough to live in a country where I can get paid to do what I want to do, and want to follow the laws set in place to do so.

I'm not saying that our tax system is perfect. There are certainly areas where it needs to be improved. Both presidential candidates have put forth plans for tax reform in their campaign, and it's important to look for opportunities for change. But just because you don't agree with the tax laws in the country, doesn't mean you can take advantage of them.

Trump's campaign statement in full accuses The New York Times of illegally obtaining the document, and avoids responding to the validity of the document itself, preferring to highlight all of the other taxes Trump has paid throughout his career.

The only news here is that the more than 20-year-old alleged tax document was illegally obtained, a further demonstration that the New York Times, like establishment media in general, is an extension of the Clinton Campaign, the Democratic Party and their global special interests. What is happening now with the FBI and DOJ on Hillary Clinton's emails and illegal server, including her many lies and her lies to Congress are worse than what took place in the administration of Richard Nixon — and far more illegal.

Mr. Trump is a highly-skilled businessman who has a fiduciary responsibility to his business, his family and his employees to pay no more tax than legally required. That being said, Mr. Trump has paid hundreds of millions of dollars in property taxes, sales and excise taxes, real estate taxes, city taxes, state taxes, employee taxes and federal taxes, along with very substantial charitable contributions. Mr. Trump knows the tax code far better than anyone who has ever run for President and he is the only one that knows how to fix it.

The incredible skills Mr. Trump has shown in building his business are the skills we need to rebuild this country. Hillary Clinton is a corrupt public official who violated federal law, Donald Trump is an extraordinarily successful private businessman who followed the law and created tens of thousands of jobs for Americans.

The bottom line is that if Trump did indeed not pay some taxes — even if it was legal — he needs to answer to the taxpayers who pay their fair share.