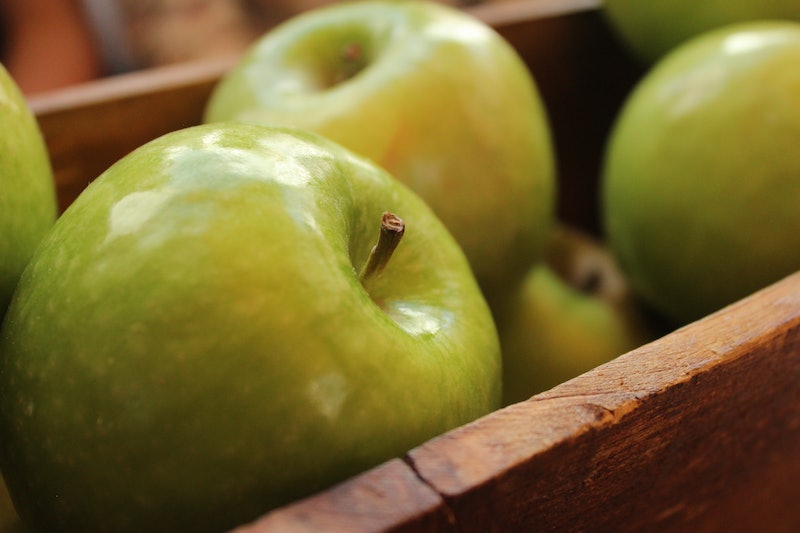 Everybody calls Christmas "the most wonderful time of the year," but if you ask me, Halloween has just as many exciting traditions — like, for example, bobbing for apples. What's more, all traditions start somewhere, and it turns out there's actually a good reason why we bob for apples. I mean, yes, if you think about it, plunging your head into a bucket of water and catching an apple with your teeth sounds a little bizarre; however, apple bobbing has a history spanning a whopping 2,000 years, eventually becoming the fall tradition we all know and love today.

Believe it or not, apples were once a symbol of romance — and the concept of "bobbing for apples" actually started out as a European ritual for courting potential heterosexual partners, according to History.com. The ritual played out like as a sort of dating game in which the girl tried to bob for an apple that symbolized her beau. If she was successful on her first attempt, that meant their relationship had been written in the stars all along. (That's a little dramatic, I suppose, but you get what I mean.) Two tries meant their relationship wasn't meant to last. Three tries meant, well, "Don't even try." Talk about speeding up the dating process.

A more competitive version of the same courting ritual had multiple women bobbing for the same apple, aka the same dude. Whoever bobbed successfully first got to marry him. I can't help but wonder if that's how we ended up with the eye-rolling gender stereotype of pitting women against each other over men; at the very least, it's evidence that our culture has been doing that to women since time immemorial.

In any event, bobbing for apples as a way to court your potential bae became less common by the 19th century. Along the way, though, this old dating game became associated with Halloween by way of Samhain, a Celtic festival that celebrates the end of the harvest. According to Alison Richards at NPR — who, as the co-author of The New Book of Apples, we can probably trust to know her stuff — Samhain starts at sundown on Oct. 31 and marks the beginning of winter. One of the purposes of the holiday was to honor the Roman goddess of fruit, Pomona, who was represented by an apple — so you can see where the connection might be. Apple trees later arrived in North America courtesy of European colonists, and by the 1800s, apple bobbing in America had become a seasonal game that's remained a classic for decades.

Like many other traditions we've learned to follow over the course of generations, apple bobbing has various names depending on where you come from. In parts of Scotland, for instance, apple bobbing is also known as "dooking" for apples. It's now popular all over the world; in fact, the world record for the highest number of apple bobbers at the same time is 597, which was set in Ohio five years ago. That's a lot of apples.

And there you have it. A Cliff Notes' version of why we dook, or bob, for apples. Happy bobbing!