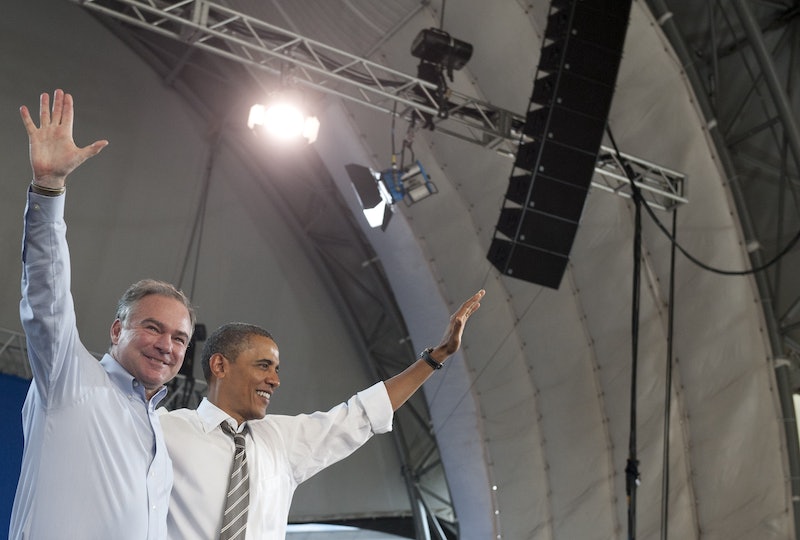 The extent to which a presidential candidate's choice of running mate matters at all is a curious one, but heading into Tuesday's first and only vice presidential debate, the VP candidates are getting extra scrutiny. One question being asked about Democratic VP pick Sen. Tim Kaine is, considering he made the shortlist eight years ago, why didn't Barack Obama choose Kaine as his vice president in 2008?

There is a lot of math that goes into VP selection, and with each presidential nominee, there are different considerations. While some believe that campaigns choose their running mates based on the idea that they might provide a boost of support in their home state, the evidence for this is mixed. Looking at recent elections, however, it appears as if the consideration has much more to do with supplementing weaknesses or shortcomings that the candidates themselves have — or, at least, trying to distract from them.

In the 2008 election cycle, Obama received a lot of criticism — much of it from primary rival and 2016 Democratic nominee Hillary Clinton — about his lack of experience. At the time, Obama had served just shy of three years as a U.S. senator, and nearly seven years as an Illinois state senator, a resume that many considered lackluster for a presidential candidate.

But this charge was no match for Obama's ability to connect with Democratic primary voters: He defeated Clinton and became the first African American presidential nominee of a major party. Still, his selection of a VP was going to be crucial, especially given the attacks he'd received on his inexperience with foreign policy.

In his book The Audacity to Win, Obama advisor David Plouffe wrote about the VP selection process in 2008, revealing that Kaine was one of three finalists for the number two spot, along with Sen. Evan Bayh and Sen. Joe Biden. "He [Kaine] and Obama... talked often about their shared belief in extreme pragmatism," Plouffe wrote, adding that "Kaine would clearly present the best initial working relationship."

However, "Kaine brought no foreign policy experience to the campaign trail," and this ultimately landed him on the bottom of the finalists. While not counting out the possibility of a Kaine pick, Obama had told his advisers, "It's a coin-toss now between Bayh and Biden."

In 2016, however, with a presidential nominee who's up to her eyeballs in foreign policy experience and having had another eight years to mature politically (including a turn as Secretary of State), Kaine's selection seems in retrospect like a foregone conclusion. While some have criticized Clinton for not picking a more liberal running mate, few have pointed out that Kaine was among one of the first governors to endorse Obama over Clinton during the 2008 run.

And if Kaine can have even half as good a night as Clinton did in her first debate, he'll have been a VP pick worth waiting for.