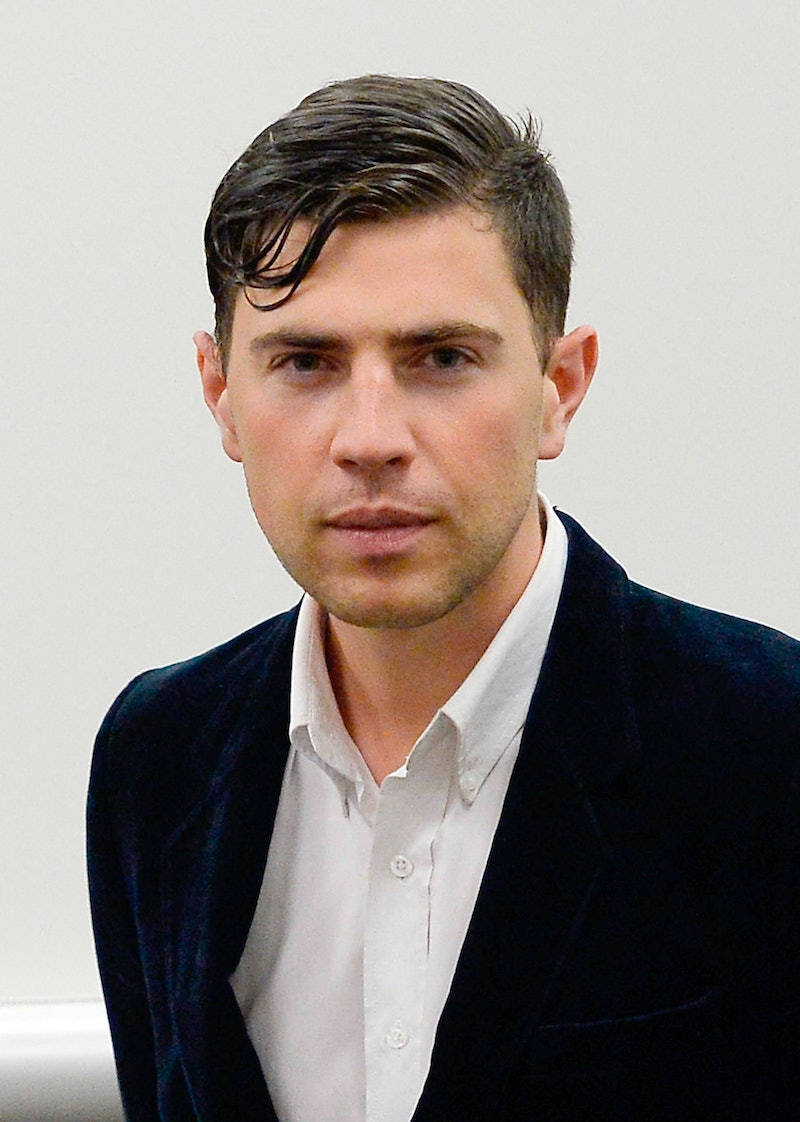 I don't know about you, but if some random person were to approach me and crawl under my dress, pick me up, try to kiss my butt, or put his head in my crotch, I wouldn't be laughing. Not only would I feel threatened, disrespected, and violated, but I'd also be inclined to defend myself. The fact that he's put numerous celebrities in that position is exactly why it's time people stop calling Vitalii Sediuk a "prankster." In fact, one would think his actions would have caused him to face legal consequences, so why is he still able to attack celebrities?

A prankster is someone who plays jokes or tricks, usually to garner a laugh. But when a joke or a trick intrudes on someone's personal space or physically violates them in some way, that's when it's no longer a prank. Take note of the photo below, of Sediuk crawling underneath America Ferrera's dress and latching onto her ankle at the 2014 Cannes Film Festival. Does that look funny to you?

Dr. Gregory Kushnick, a New York-licensed psychologist, gives his thoughts about Sediuk's motivation in a statement to Bustle. He explains,

"The concept of a prank has evolved to become a culturally permissible phenomenon. It now represents entertainment, even when harassment is evolved. Shows like Jackass and stunts like those of Sasha Baron Cohen have normalized and desensitized us to 'bad behavior,' including harassment. People are entertained by bad behavior. It's doesn't shock people as it used to."

It's clear that Sediuk isn't afraid to cross the line into "bad behavior" in order to get his name out there. He told the Victoria Derbyshire program (via BBC News) in October, "I'm doing this for attention, and the more attention I receive the bigger platform I can get to express my opinion on certain topics."

In June 2014, after attacking Brad Pitt on the May 2014 red carpet for Maleficent, Sediuk spoke with Extra. Not only did he refer to his "pranks" as a "style of entertainment," but he added, "I don’t think [there’s] something wrong with me. I am a different guy who thinks differently and has this entertainment spirit that probably people in Hollywood never experienced before. It’s something different, controversial, extraordinary and it’s hard to explain. I’m normal, at least I believe so."

After ambushing Pitt, Sediuk was sentenced to three years of probation and a year's worth of psychological counseling by a Los Angeles judge. In September 2014, upon boarding a plane in Istanbul heading to Los Angeles, the Ukranian reporter and model discovered that U.S. Customs and Border Protection placed him on the no-fly list.

So why hasn't he faced more charges or jail time? In one case, it was because he took a plea deal. In February 2013, Sediuk avoided a six-month jail sentence after crashing the Grammys. The former Ukraine channel 1+1 reporter took Adam Levine's seat and stormed the stage after Jennifer Lopez announced Adele as a winner. Per The Hollywood Reporter, he went to jail overnight and the then-City Attorney Carmen Trutanich wanted to prosecute him to the full extent of the law. Sediuk ended up taking a plea agreement, which included him swearing never to set foot anywhere on the L.A. Live complex (it houses the Staples Center and the Nokia Theatre) and to stay out of trouble for three years. At the time of the case, Sediuk's lawyer Anthony Willoughby said, "He pled no contest and it was a deferred entry of judgment. If he stays clean for three years, he'll be able to withdraw his plea and the charges will be dismissed."

In 2013, Sediuk spoke to The Hollywood Reporter after he showed up to the Oscars wearing a look-alike Bjork swan dress. After crashing, he claimed the reason he didn't get into more trouble was because, "Right away, [police] detained me and asked for Academy representatives. They said, 'Are you the same guy who crashed the Grammys?' and I said yes." He added, "Representatives from the Academy came and told them to arrest me. But the police said that this was a protest, and so they didn't have the evidence to arrest me."

One would think that the more recent incidents where Sediuk has physically touched celebrities would be cause for more punishment than he's received in the past, but that has yet to happen. Bustle spoke with Daniel R. Perlman, a Los Angeles-based criminal defense lawyer, to get his thoughts on why Sediuk hasn't faced more legal consequences. He says what it really comes down to whether celebrities want to pursue further legal action, and Perlman believes many famous individuals just don't want to waste their time on Sediuk or bring him more attention. As Perlman explains,

"I think that the issue is that by pressing charges the celebrities themselves would have to go be witnesses in a criminal prosecution and he’s not doing such damage to them that makes it worth it for them to take that time out of their schedule. And also give him that attention that he’s clearly wanting — that puts him in the news even more and presumably embarrasses them even more. So I think that’s a big part of why making celebrities a target is effective for him because by and large they're not going to have the time, energy, or they don't want to lose the cache of pursuing this, making it seem like it was important to them that they got pranked."

Despite an apology he gave to the The Hollywood Reporter in July 2014 in which he said he was "changing [his] life," he definitely hasn't. In September of this year, he seemingly tried to kiss Kim Kardashian's butt in Paris, France, and literally picked up Gigi Hadid in Milan, Italy.

He took to Instagram to express why he put his mouth near Kardashian's rear end and wrote, "I was protesting Kim for using fake butt implants. I encourage her and the rest of Kardashian clan to popularise [sic] natural beauty among teenage girls who follow and defend them blindly."(Sediuk had a similar reason for picking up Hadid.) According to E! News, Kardashian is going to file a complaint with French authorities over Sediuk's recent actions. TMZ also reports the Keeping Up With the Kardashian star wants a restraining order against him. Bustle has reached out to a rep for Kardashian for comment on these reports, but has not yet received a response.

According to Perlman, it's unlikely that any celebrity would go above and beyond to ensure that he gets punished. (Though, perhaps that won't be the case with Kardashian, who has been attacked more than once by Sediuk.) "I just think that publicists and agents are going to tell the clients that they represent that it’s not in their best interest to, first of all, draw attention over and over again to the fact that they got pranked," Perlman explains, "but also to give this guy the attention that he craves. It would make him more famous if there was a court case against him."

What makes all of this even scarier, is that it doesn't seem like he will ever stop. Granted, he told the Victoria Derbyshire program that he won't attack Kardashian again, but that doesn't mean he won't continue "pranking" other celebrities. "So far, Sediuk has learned that he can get away with harassment so there's very little to deter him from repeating himself," Kushnick says. "If he has convinced himself that he is acting for the common good, it will take strong legal measures to stop him."

The fact that Sediuk thinks it's OK to approach someone he doesn't know and physically lift them up, or crawl under their dress, or try to kiss them without permission is infuriating. No matter who it is, no one should have to walk around knowing someone could come up to them at any given moment and cross the line in some way, shape, or form. I'd like to believe that one day all of this will catch up to him, that he will face some type of legal punishment, and that he will eventually stop his attacks. However, it's hard to remain hopeful when Sediuk continues to, for the most part, get away with everything.

Regardless of what Sediuk believes, I will never see him as a "prankster."