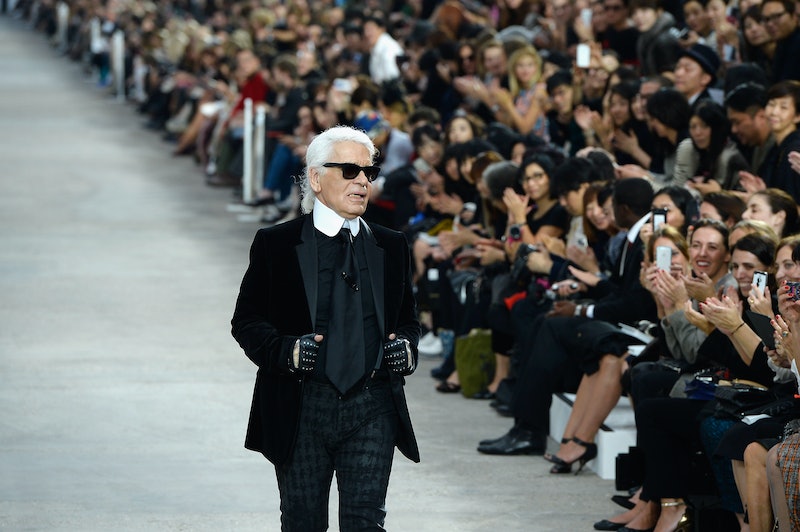 Every time I read something about Karl Lagerfeld — He put selfie-equipped iPads in his store! He thinks it's repulsive when people aren't clean! — I become more and more convinced that this odd, white-haired fashion personality is none other than the reincarnation of Andy Warhol. The similarities are too many to miss, and once you see it, you can't unsee it — which is exactly the type of effect Warhol and Lagerfeld like to have on people. Here's why I think Warhol lives on in the House of Chanel:

1. Both refuse to be seen without their fake (or fake-colored) hair.

2. Both know what the public wants before they want it.

Warhol's wealthy contemporaries didn't know they needed hot pink screen-printed portraits of their face, but once Warhol introduced them to the idea, they couldn't get enough. Lagerfeld brought back sneakers — not cool high-tops, not simple white Keds, but dorky, sparkly sneakers — and now everyone's wearing them.

Both men had/have no problem at all with making things that sell. Lagerfeld changed his name from the original "Lagerfelt" because he felt that the new version was "more commercial." One of my favorite Warhol quotes is, "You know it's ART when the check clears."

Lagerfeld: "I am basically the most superficial person in the world."

Warhol: "I love Los Angeles. I love Hollywood. They're beautiful. Everybody's plastic, but I love plastic. I want to be plastic."

You don't need me to tell you about Warhol's Campbell's soup paintings. Here's what he had to say about Coca-Cola: "What's great about this country is that America started the tradition where the richest consumers buy essentially the same things as the poorest. You can be watching TV and see Coca-Cola, and you know that the President drinks Coca-Cola, Liz Taylor drinks Coca-Cola, and just think, you can drink Coca-Cola, too." Lagerfeld channeled a similar idea at February's Chanel supermarket show, mixing luxury Chanel designs with brightly colored articles from every day life — like soup and soda.

Warhol screen-printed Marilyn Monroe's face over and over. Lagerfeld loves the iPod so much he claims to own 300.

7. Both are continually crafting their own image.

You don't go around in silver/white hair, saying extraordinarily eccentric things, if you're not busily shaping your own cult of personality. Needless to say, both men were happy to turn their own faces into art — or at least into money. Warhol famously screen-printed his own face, while Lagerfeld has turned himself into a furry doll and a series of emoticons.

8. Karl Lagerfeld was in a Warhol movie.

I saved this one for second-to-last to really blow your mind. Karl Lagerfeld and Andy Warhol actually knew each other! (In typically Lagerfeld fashion, he later said that Warhol was "physically...quite repulsive.") Lagerfeld appeared in Warhol's film L'Amour, though you'd barely recognize him without his sunglasses and starched collars. Here's a slightly NSFW clip of a young and — kinda hot? — Lagerfeld, with Warhol presumably right behind the camera:

Lagerfeld: "I have no human feelings."

Warhol: "Machines have less problems. I'd like to be a machine, wouldn't you?"