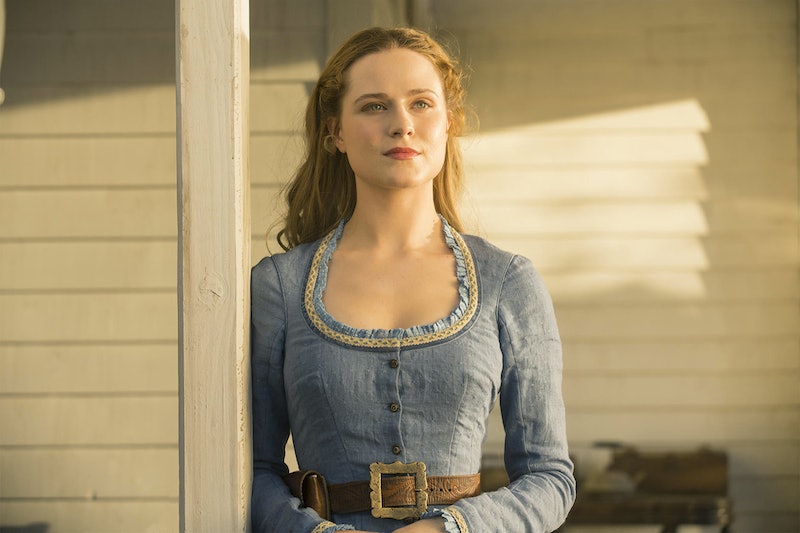 HBO's content is typically not for the faint of heart. As a premium cable network, it's able to produce television programming that pushes boundaries broadcast networks never could — which is exactly why subscribers pay a monthly fee for access to its content. Sex, violence, and other situations intended for a mature audience are part of HBO's brand, and so it's no surprise that new HBO series Westworld premiered with plenty of the previously listed. The show, about a theme park filled with hyperrealistic robots in which people can live out their wild west fantasies, featured a scene in its premiere that heavily implied the rape of Evan Rachel Wood's character, an android named Dolores. Now, in a new interview with The Hollywood Reporter, Wood is sharing her feelings on how Westworld uses violence against women in its narrative, and it's providing some hope that scenes like the one in the premiere won't be gratuitous.

In an interview with THR, Wood explained that Westworld aims to use rape and other violence against women in an effort to comment on human desire to behave in violent, morally reprehensible ways. She stated:

I don't like gratuitous violence against women at all, but I would wait for the context in which it's being used. As the show progresses, the way it's being used is very much a commentary and a look at our humanity and why we find these things entertaining and why this is an epidemic, and flipping it on its head. The roles for the women on this show are going to be very revolutionary. It's very gender-neutral. I would ask, as somebody who is an advocate against any kind of abuse or violence and is outspoken about it, to give it a chance and wait to see where it's going. I think it will surprise people.

Rape — or rather, the offscreen implication of it — occurs within minutes of Westworld's premiere. Dolores returns to her ranch, as she does every night, and is confronted by one of Westworld's "guests" who prefers to play bad. After killing her robot lover, the man (portrayed by Ed Harris) drags a screaming Dolores offscreen into a barn, presumably to rape her. It's a highly disturbing scene, and it's hard not to have it affect you as a viewer.

It's also hard not to compare it immediately to Game of Thrones, considering the controversies that've plagued that show regarding its own dealings with storylines that involve rape. In 2014, the series came under fire when fans and critics called out Jaime's rape of his sister Cersei as an unwarranted, overshadowing plot device that didn't make Jaime the villain he should have been. In 2015, Ramsay's rape of Sansa was accused of being a wildly unnecessary scene wrongly used to further Sansa's arc. To many fans of the series, the rapes of these women weren't justified in the storytelling — Sansa overcoming her rape wasn't what made her a strong woman, and we didn't have to see Jaime rape Cersei to show their relationship is a toxic power struggle. (The fact that Game Of Thrones quickly allowed these two to come back together after Cersei's rape did not sit well with viewers, either.) Watching two women be raped so the show could drive home the point that these corrupt, violent, and immoral men are the "bad guys," or worse, are going through struggles of their own, is not only lazy storytelling, but a way of turning a very real women's issue into a plot device.

Westworld could easily fall into the same patterns that people criticized Game Of Thrones for, and it's possible that some fans already see Dolores' implied rape as doing so. However, actor Wood wants fans to consider the context before accusing Westworld of handling rape in the wrong way. Westworld may have a very legitimate reason to include a rape scene even (or, perhaps, especially) if it makes viewers uncomfortable. The show is, at its core, about a human desire for depraved behavior. Technically (as far as viewers are aware, anyway) the robots who exist in Westworld don't have the same range of "real" emotion that human beings do — therefore, the people who vacation in Westworld believe they're not really hurting anyone. The disturbing question Westworld asks is why this violence appeals in the first place. Can fictional violence be dangerous in its own way, despite minimal "real" consequences? Is a man who rapes an android a monster because the android's struggle appeals to him, or is that act of violence not quite real because she isn't "real" herself? The fact that Westworld is making fans ask any of these questions suggests that there is, perhaps, a purpose to its depiction of violence.

That doesn't mean that Westworld should have a free pass at showing sexual violence, of course, but it seems that the show understands that it has to be careful in how it presents sexual violence as opposed to the gunslinging also evident in this world. Unlike scenes on Game Of Thrones that show rape as it takes place, viewers didn't see anything outside of Dolores being dragged off in that pilot episode. There's nothing sexualized about Dolores' apparent rape: instead, it's about the man exerting power over her. That's one distinction that Westworld can boast from GoT, and I think it's an important one. The rape in Westworld doesn't play like a sex scene; it plays like the act of horrific violence that it is.

We'll have to wait and see more episodes to determine whether Westworld will truly flip these tired tropes on its head, as Wood promises, but it's certainly worth finding out.