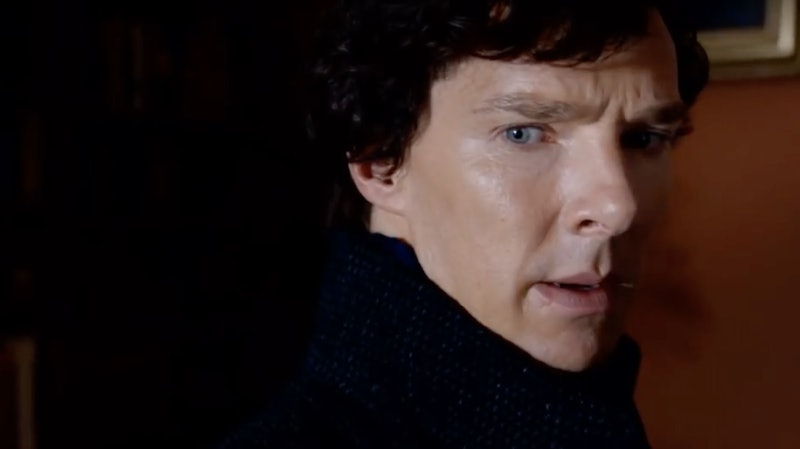 I've got some bad news, Sherlock fans. As much as it pains me to say it, it's looking like Sherlock could be ending after Season 4, at least if you believe what Benedict Cumberbatch says. And has everyone's fave British boyfriend ever steered us wrong before? Never, I tell you. Never. So when it comes to putting the puzzle pieces together, á la our fave deerstalker-wearing detective, I think fans of Sherlock may have to start bracing themselves for the simple truth that this is well and truly the last time they'll see Baker Street's finest on the small screen — at least, in the forms of Cumberbatch and co-star Martin Freeman.

The rumors have already begun to swirl that we could be witnessing, as Cumberbatch puts it, "the end of an era." He recently told Variety that "It feels like the end of an era, to be honest. [Season 4] goes to a place where it will be pretty hard to follow on immediately... But in the immediate future we all have things that we want to crack on with and we’ve made something very complete as it is, so I think we’ll just wait and see." Wait and see? Surely Cumberbatch knows that the Sherlock fandom may be practiced in patience, but it's hardly an innate predisposition. If the rest of the fandom is anything like me, they chomping — hard —at the bit for Season 4 to drop.

To be fair, I can't say I'm all that surprised that the Sherlock cast and crew have made a complete enough season just in case the story really does end afterwards. As the star power of both Cumberbatch and Freeman has grown over the years, their roster of of respective film projects has grown exponentially. Cumberbatch is now deeply embroiled in the Marvel universe, heading up his own solo franchise with Dr. Strange. Freeman, meanwhile, took a jaunt through Middle Earth as Bilbo Baggins in The Hobbit films for a spell and has a few more films up his sleeve. Why rush back to Sherlock when Season 4 is self-contained and could be an ostensible ending?

It's sad, though, knowing that the magic of Sherlock and John Watson, as embodied by Cumberbatch and Freeman and further stylized by showrunner Steven Moffat (of Dr. Who notoriety), could all end very soon. But surely there's comfort in knowing that out of the many iterations of Sherlock Holmes over the last one hundred plus years, this one will stand the test of time. Right?

So, whether or not Season 4 is well and truly curtains for Sherlock, all I can attest to is that the newest installment looks to be an absolute nail-biter.