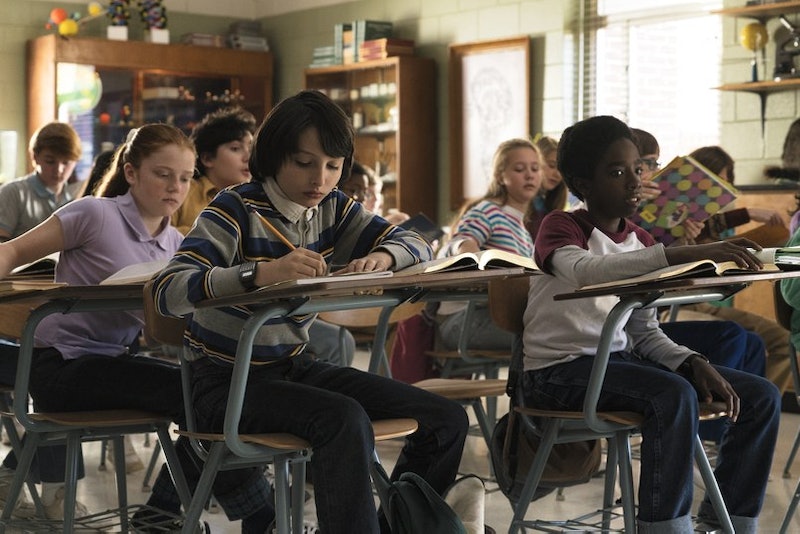 After marathoning the entire first season of Stranger Things, Netflix enthusiasts may feel set adrift in a sea of having no enjoyable '80s-themed characters to worry about. But fans should never fear, because if you so desire, you can instead focus on being an extra in Season 2 of Stranger Things . Recently, a listing on Backstage popped up for "1980s looking people 17+" for "an untitled TV series for a major streaming service." From that notice, it would seem very likely that Netflix is looking for a few more residents to join the strange town of Hawkins, Indiana.

Of course, no one can be totally certain that the extras being sought out are for Stranger Things. Just because the show's second season will be shooting in the Atlanta area (just like Season 1) and casting is being taken care of by Casting Taylormade (just like Season 1) doesn't mean this call for extras is for the spooky nostalgic series. But let's be real, it probably does. And if you happen to be an extra on the series, think of the Season 2 spoilers you might be privy too. All the feelings of concern for Eleven's disappearance and Will's vomiting issues could be assuaged by a little background actor intelligence gathered while you're on set.

The Backstage notice also requests that background actors be willing to cut their hair, specifically girls with bangs and boys with long hair. Is this just a stylistic '80s choice for people out and about Hawkins? Or does Eleven's Papa have a gang of bang-less female associates assisting him with his forays into the Upside Down? Could he have a bunch of guys with long hair locked up somewhere powering a device with their brains who haven't seen the light of day in years? It really could go any which way. It wouldn't be the first time an actor has been asked to cut their hair for the series, though bangs are a lot less of a commitment than a full on buzz cut.

So what does it all mean? What's going to happen in Stranger Things Season 2? The easiest way to find out — aside from waiting for leaked photos, teasers, trailers, and watching the actual season when it premieres next year — is to put yourself out there and attempt to be an extra. At the very least, if you get cast, you'll get to hang out in Hawkins — even if you don't have any idea what's going on there.