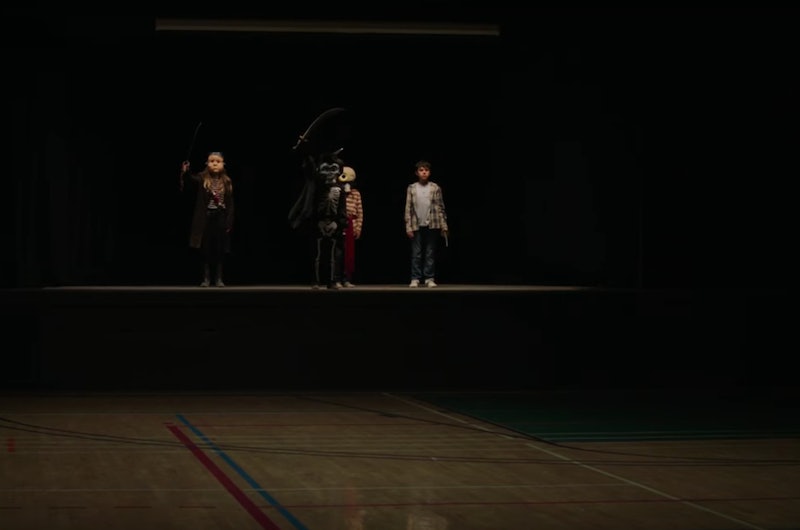 If you're anything like me, then you like to spend the month leading up to Halloween indulging in the creepiest of activities like watching scary movies, telling ghost stories, and going to haunted houses. And what on earth is creepier than creepypasta? (If you've read any, you'll know the answer is: nothing.) So prepare yourself for the new Syfy series Channel Zero , an anthology that is about to take everything that's terrifying about creepypasta and beam it directly into your living room. Turn off the lights, grab a blanket, and hunker down, because the just-released official Channel Zero trailer looks as scary as all get-out.

The six-episode first season of the show is based on the popular creepypasta "Candle Cove." This particular Internet urban legend takes the form of a forum where various people are reminiscing about a television show they all used to watch when they were kids, a puppet show about pirates called Candle Cove. As the story goes on, their recollections become gradually more grotesque, including a villain named the Skin-Taker, supposedly cloaked in the flesh of children.

In Syfy's adaptation of the story, Paul Schneider (Parks And Recreation) stars as Mike, a man whose memories of Candle Cove drive him back to his hometown, where are series of strange events involving the town's children is taking place. Harry Potter's Fiona Shaw also co-stars as Mike's estranged mother.

The first full trailer for the upcoming series makes it clear that creator Nick Antosca (Hannibal) and producer Max Landis (Chronicle) don't intend to skimp on the horror or gore. In just 45 spooky seconds, viewers are treated to glimpses of freaky marionettes, masked children, bodies hanging from trees, and a boy whose skin has seemingly all been removed. So basically, the perfect stuff to get in the mood for All Hallow's Eve.

If the thought of just one season of horrifying creepypasta nightmares isn't enough for you, then you're in luck. When Syfy greenlit the show, it picked it up for an automatic two seasons, which means there's at least one more gruesome go-round in store. While Season 1 of Channel Zero will focus exclusively on Candle Cove, Season 2 will switch gears (and casts) entirely, treating fans to the delightful story of "No-End House," a haunted house where each room is progressively more horrifying than the last, and which (appropriately enough) has no end. The Path's Amy Forsyth will star in Season 2 of Channel Zero, while it was just recently announced that True Detective and American Horror Story baddie John Carroll Lynch has also been cast in the sophomore outing.

If this sounds like the kind of horror show that's right up your alley, Channel Zero premieres on Tuesday, Oct. 11 at 9:00 p.m. ET. Turn on your TV, switch the channel to Syfy, and watch… if you dare.

More like this
The Weeknd Is Turning 2020’s ‘After Hours’ Into A Nightmarish Haunted House
By Radhika Menon
Jane Lynch Revealed Why She’s Leaving 'Funny Girl' After Lea Michele Was Cast
By Grace Wehniainen
On 'Industry,' Marisa Abela Takes Control
By Morgan Leigh Davies
'A League Of Their Own' Star Abbi Jacobson Is Engaged To Jodi Balfour
By Jake Viswanath
Get Even More From Bustle — Sign Up For The Newsletter