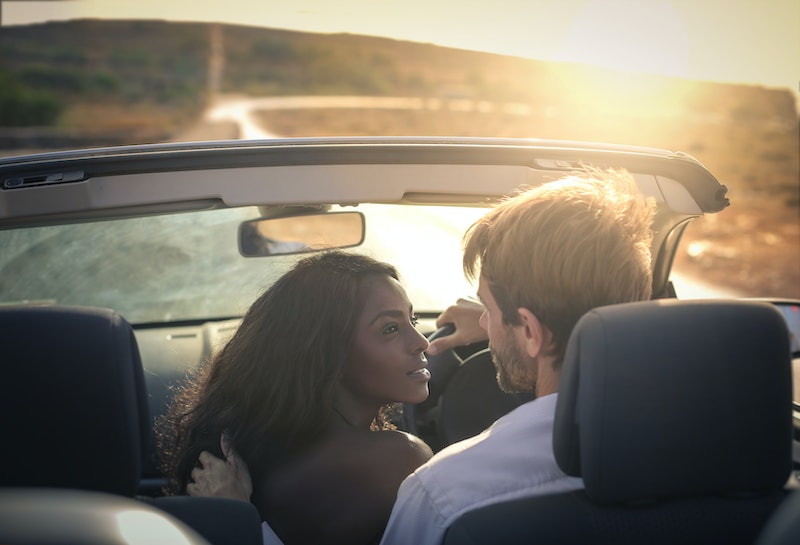 Cars evoke autonomy and adventure: the purr of the motor responding to your touch, the way your heart rate quickens as your speed increases. It's no wonder that having sex in the car, according to a new study, remains a rite of passage across America. For many young pleasure seekers, exploring parts unknown in the backseat is just as important as learning to maneuver a vehicle on the open road.

Psychologists at the University of South Dakota recently surveyed 706 undergraduates about their auto-erotic tendencies. Of the 195 male and 511 female subjects, 60 percent reported having sex in a parked car starting around the age of 17. Men tended to view car sex more favorably than women did, but most found it “an enjoyable sexual and romantic adventure" — and not just a one-off hookup, either. Eighty-four percent of subjects reported having car sex with a serious romantic partner. "People are having sex in their cars because it’s the only place they have! I think it’s always been bit awkward and uncomfortable and always will be,"relationship therapist Aimee Hartstein, LCSW tells Bustle. "It’s all about convenience, privacy, and access."

Study author Cindy Struckman-Johnson told The Daily Beast that parked car sex is “a behavior that’s tied to serious dating, which some people think is dying out.” On the contrary. Millennials "don't date" just as much as they "don't have car sex," apparently, because some practices will never go out of style.

In honor of this timeless act, I sourced 12 anecdotes from folks about their experiences with sex on wheels.

"I was dating this guy when I was a freshmen in college and he was mega hot. He picked me up from my house one night and he drove me to this parking lot [at a store] that was kind of empty and dark. We were drying humping at first and then things got really hot and heavy. Right when we were about to f*ck, a cop pulls up next to us with bright lights and the dude jumped out of nervousness and right when the cop knocked on the car window, he got his cock stuck in his jean zipper exposing not only his member, but its bleeding foreskin. The poor guy was so embarrassed and on top of the embarrassment, he got a summons and was told not to go to that [store] ever again."

"A 1995 Saturn is not a good car to have sex in. It's got bucket seats in the front AND back. No leverage."

"A gal I was dating years ago took me to Cali to a friends goth/fetish wedding and after the wedding we drove to a party. On the way, she finger f*cked me riding down Santa Monica blvd. It was pretty hot also for the fact that people could see as we were sometimes stuck in traffic."

"I'm 17 years old, and had been dating my 19-year-old boyfriend C. for about a year at this point. We'd had sex a couple times prior to this evening, but it was never very...eventful. It was a Friday night, we're driving home from a show, and we realize that we're ahead of schedule; I'd told my dad I'd be home at 11 p.m., and it was barely 10 p.m. We decided to pull off down a little dirt road, made our way a few feet into the woods, and turned the headlights off. I pulled my panties off, hopped on top of him, and got down to it. Halfway through (after he'd unexpectedly managed to belatedly pop my cherry — I'm guessing the angle had something to do with it) we saw lights pull up behind us. I launched myself off of his lap, pulled my bloodied undies and jeans up as quickly as I could, and sat there in abject horror as a state trooper stomped up and shone his flashlight in the car window. He asked us for ID, but after a few nailbitten moments, grudgingly allowed us to drive off. The thought of my dad's reaction had the scenario played out differently still haunts my dreams to this day."

"My first car sex happened in the parking lot of a church. I was 19 and at a party with friends and had brought along a girl I was into who was a mutual friend of my guitar player. It started getting hot in the house so I went outside to try to cool off. The girl I brought came outside to talk and flirt and such. She asked: "So I know you from somewhere else than just a mutual friend." I replied, "Yeah, from your dreams." Beyond all reason or human explanation, that worked. She pounces on me and we began making out on the hood of my car. At this point, party goers had begun gathering outside to also beat the heat, and some of them started coming closer to watch us. After a bit of time I wanted to go down on her so I picked her up and threw her on the hood, ripped her panties off from under her skirt and started going down on her. As more people gathered, I decided it was time for a REAL show, so we stood up, stripped off our clothes and I bent her over the hood. We had sex on top of my car for about 25 minutes in front of about a dozen people. It was EXHILARATING! I'm not usually much of an exhibitionist but that was intense."

"So, my ex and I were at her place, but she had friends staying there. At first, we were pretty shy about having sex in the house so, we obviously went for the next option: her car. The car was really small, so that was the first clue that this wasn't gonna go great. She unlocks her car, we hop in the back, and we start trying to have ~*relations*~. She lays down, but part of her is hanging off the seat. We manage to get her top and underwear off with some miracle moves and contortion, and I get to trying to eat her out. Mind you, there's no room for me to sit in front of her for that, so I scrunch into fetal position in front of her and I'm trying really hard to put the work in, but my knees start to hurt my chest and I just give up. She kept talking about wanting to try it again the next day, but I was honestly so turned off by the whole experience, I was prepared to deal with not having any sex until her friends left the next week."

"I was living with my mom at the time and he was living an hour away. Much of our dates were spent in cars, because we didn’t really have a place to hang out. In terms of doing sexy things, it was totally off limits. There was no privacy whatsoever. The only thing that we could do was car sex. We had a code word if we wanted to leave my mom's house and have sex: which was to "get ice cream." One night we looked at each other and said we had to get ice cream. My mom lived by a huge stretch of desert, totally untouched land. Lots of dirt and cacti and beautiful trees. So all we had to do was drive a couple blocks away from my house and park in the desert and have car sex. We did it all the time without issue, but one night we were having sex and it was getting really hot and heavy and all of a sudden I notice some really bright lights coming from behind us. I started to panic and thought it was a car approaching. I didn't see any cars but this light was still shining really, really bright. Then I realize that I can hear a helicopter circling above us, and the police are shining their floodlights into our car. I start the car and start driving away, and the helicopter is flying really, really low, and I'm swerving the car and trying to evade the police and I'm speeding really fast. At one point it just turned off the lights and flew away. That was the last time we ever had car sex."

"My first sex was car sex. I was 16. She was 18. It took place in front of a punk club in Hallandale Florida in 1981. Christine looked like a girl that Varga misplaced, and desperately wanted back. I remember she was wearing tight black jeans and pumps, and as she got closer to me and my friends, or as I call them, the semi-glamorous disasters of my youth, I noticed a Clash pin on her crimson red tube top which was buckling under the strain. This has got to be a self-fulfilling hallucination I thought. No high school girl looked like her. We hung out and made out and with a belly full of Boonesfarm Tickle Pink and I escorted her to my car. She handed me a pill and without taking my eyes off of her I swallowed it with the warm wine backwash. 'What was that,' I asked as the windows steamed. 'A Quaalude,' she replied with a mischievous grin. Then with Soft Cell's 'Tainted Love' playing I finally lost what could never be returned...I also threw up all over both of us. Amazingly we dated for a few months before she went to college. Only the smell of Tickle Pink in my car lasted longer."

"One time, this guy and I were hanging out all night, being adorable and such, and ended up driving up a mountain to watch the sunrise. One thing leads to another, and we start hooking up. Eventually, we start hearing these loud impact noises every 15 minutes, but at this point the windows are fogged up, and we can't see out of the car and are too pre-occupied to care. We get back to business, and the noises start becoming more frequent. Eventually we finish, and the guy, still naked, rolls down the window to check what's up. It turns out that the entire time we were f*cking, an archery team had shown up to practice, and we were literally parked on the range."

"We had only been Facebook friends until he spotted me IRL at a party one night thrown by mutual friends near the beach. Flash forward a few minutes and we are somehow making out, because apparently being internet friends is all the familiarity you need to get something going. I asked him if he'd ever had sex in a car — which he hadn't — and I proceeded to lead him back to mine. It was kind of chilly out, but luckily I was prepared with a pair of scissors, so I just cut a hole in the crotch of my tights for easy access. It wasn't my first ride at the car sex rodeo."

"After a first date with a woman I met on online, I got her a cab to take her home to Harlem and then invited myself into the cab with her. I was, of course, hoping to be invited in when she arrived at her apartment, but she said she didn't want to bring a strange man into her apartment when her young daughter was there. Fair enough. So I went down on her in the backseat of the cab. She seemed to enjoy it plenty, there wasn't time for her to reciprocate before we arrived uptown, and the next day when I emailed inquiring when we might see each other again, she replied that she had never done something like that before and that she had done it with me and enjoyed it which worried her. Oh well."