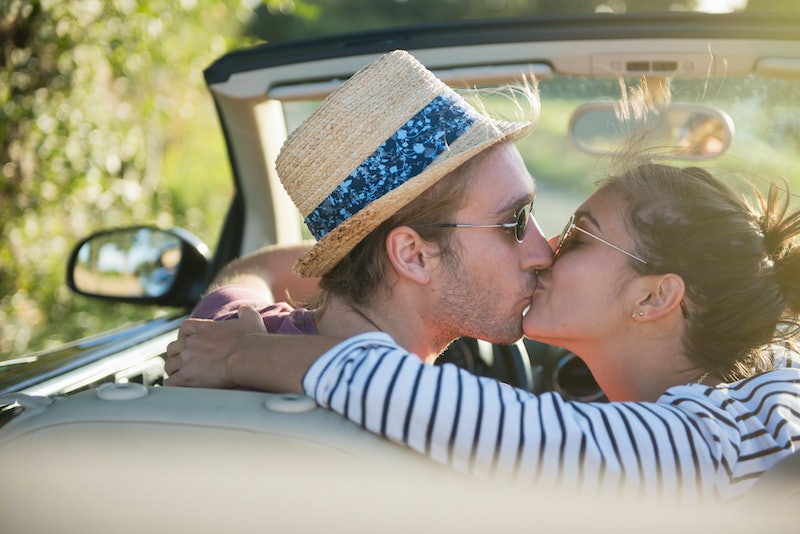 Having sex in the car is about as American as apple pie. Seriously. I grew up in rural New Hampshire and having car sex was an integral part of the high school experience. Now, research has shown that it really is a rite of passage. And not just in an old drive-in sort of way, the tradition of sex in the car is alive and well.

The University of South Dakota study in Journal of Sex Research looked at 195 men and 511 women and found that the link between cars and sex is still very much there. In fact most people surveyed— 59.5 percent— have had sex in a car before. (A parked one, obviously, I'm not advocating sex driving.) “Sex and cars have gone together since the car was invented,” USD psychologist and study leader Dr. Cindy Struckman-Johnson said in a press release.

Why is it so popular? "My first instinct is that people are having sex in their cars because it’s the only place they have! I think it’s always been bit awkward and uncomfortable and always will be," relationship therapist Aimee Hartstein, LCSW tells Bustle. But, despite those drawbacks, there's one key reason why it is— and looks like it will continue to be— a prime choice.

"It’s all about convenience, privacy, and access," Hartstein says. That definitely was this case for me— it was a late-night spot that was private— and you could always drive somewhere you knew you wouldn't be interrupted. It was perfect. Here's what else the survey learned about cars and sex:

1. It's A Popular Spot For First-Timers

Talk about a coming of age setting. Fourteen percent of people surveyed actually lost their virginity in a car, which considering all of the places one could conceivably lose their virginity, is really high. Let's hope that they were dealing with roomy back seats or a great recliner, otherwise it can be an uncomfortable introduction to sex.

2. And It's Not Just About Random Hookups

When you think of having sex in a car, it's probably thoughts of high school romance, summer nights, starry skies, the whole romantic lot. And that's exactly what respondents said. In fact, 84 percent did it with a romantic partner rather than a fling— so car sex might actually signify being serious with someone, instead of just a random hookup.

3. It's Not Closing The Orgasm Gap Though

Despite the partner versus fling dynamic of a car, the back of the car was not good for orgasm equality. Not at all. During their most recent encounter of car sex, 86.4 percent of men reported orgasming compared to just 48.3 percent of women — that means men were almost twice as likely to orgasm, which is definitely not fair. But considering how cramped and quick car sex can be, I guess it's not surprising. You're not exactly in a prime position for making sure everyone's needs are met— it's much more often a "wow we finally found a position where it fits in, let's take advantage of this until one of us falls over or cramps."

But you know what? Car sex is still great. It's a big part of growing up and sexual awakening for a lot of people and I'm really glad to hear it's not going anywhere.

More like this
The 19 Best Tweets & Memes About Bisexual Awareness Week
By Lexi Inks
Are Quality Time & Gift-Receiving Love Languages Compatible?
By Lexi Inks
How To Set Rules If You're In An Open Relationship
By Lexi Inks
Breeding Kinks Have Been On The Rise Since Roe V. Wade Got Overturned
By Lexi Inks
Get Even More From Bustle — Sign Up For The Newsletter