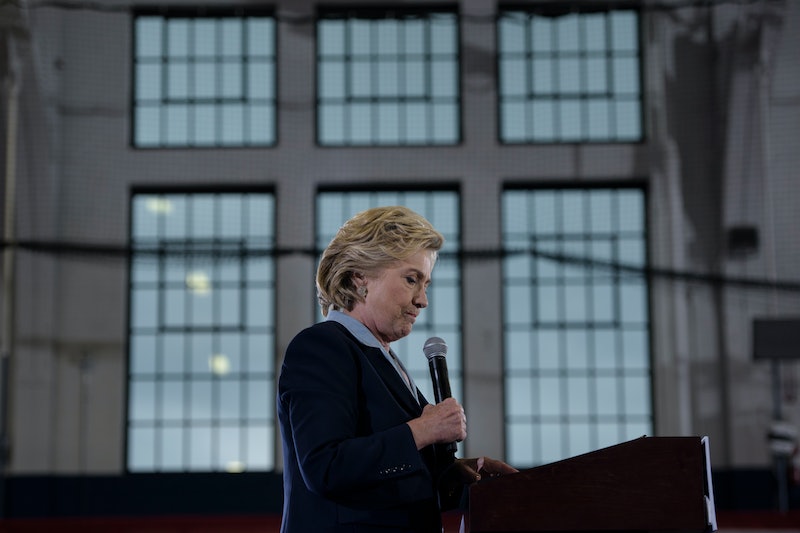 I've never been a fan of Hillary Clinton. As a leftist who opposes foreign intervention, loathes plutocracy, and sees the wealth gap as one of the biggest threats to America's long-term well-being, there are more than enough reasons for me to hate Clinton and her neoliberal, neoconservative policies. I've never thought she was a very talented politician, and I spent much of 2015 hoping, against all odds, that Bernie Sanders would win the Democratic presidential nomination. On several occasions, I've said I hated Clinton. Here's why I'm voting for her in November.

This isn't a matter of me being inspired by Clinton or the campaign she's run. I'm not. But I also understand that, despite what we're told in high school government classes, presidential elections aren't really about being inspired. It would be nice if they were — what a wonderful world that would be! — but as history shows, that's an unrealistic standard to have. Just about every candidate for the presidency who has a chance at winning is going to be tolerable at best and appalling at worst. Waiting for an "inspiring" presidential candidate is like waiting for a romantic partner who's completely perfect and devoid of any character flaws. It's the version of life depicted in fairy tales and the movies, not the reality we actually inhabit.

So I'm voting for whichever candidate has the best chance of defeating Trump, and I truly don't care if that candidate is Clinton, Sanders, Gary Johnson, Jill Stein, or Vermin Supreme.

So, no, I'm not voting for Clinton because she inspires me. I'm voting for Clinton for one reason, and it's a simple one: Donald Trump is a fascist and a demagogue, and Clinton is the only person on the planet standing between him and the presidency. Therefore, I'm voting for Clinton. That's pretty much it. Despite Clinton's flaws — and they are numerous — in no way do they compare to the catastrophic danger Trump poses to America.

I'm a Jew, and Trump's army of neo-Nazi supporters have let me know in no unclear terms that they'd like to exterminate me if he gets elected. Sure, I fear for my personal safety under a Trump administration, but that is just a small, small part of why I oppose him so vehemently.

As liberal and conservative commentators alike have noted, Trump is a legitimate danger to the country regardless of what race, ethnicity, or religion you are. In part, he's an extension of the nativism that's been seething beneath the surface in the GOP for decades. But make no mistake about it, Trump is in a category separate from the rest of the Republican Party, and he poses a unique threat to American civil society that has no parallel in either party.

I am well aware that people say this kind of thing during every presidential election. To make clear that this really is a unique situation, and that I'm not crying wolf, here is just a partial list of the things Trump has done that set him apart from Mitt Romney, John McCain, George W. Bush, and just about everyone else who's run for the presidency under the banner of a major party:

I could go on. But these examples alone make it blindingly obvious to me that Trump is a dire and perhaps mortal peril to America — a country that, for all of its flaws, is one of the most free and open societies on the planet. He is also a threat to all of America's allies and the functioning of the global order in general.

So I'm voting for whichever candidate has the best chance of defeating him, and I truly don't care if that candidate is Clinton, Sanders, Gary Johnson, Jill Stein, or Vermin Supreme. The stakes are simply too high. Absolutely every candidate who has run in this election (including, yes, Ted Cruz) would be an exponentially better president than Trump.

Voting third-party isn't an option. The two-party system is horrible, but voting for a third party will do nothing to diminish it. And even if it would, the consequences of perpetuating the existing system for four more years are far, far less severe than the consequences of electing Trump. And so I say, without any hesitation whatsoever, that #ImWithHer. It's not even close.