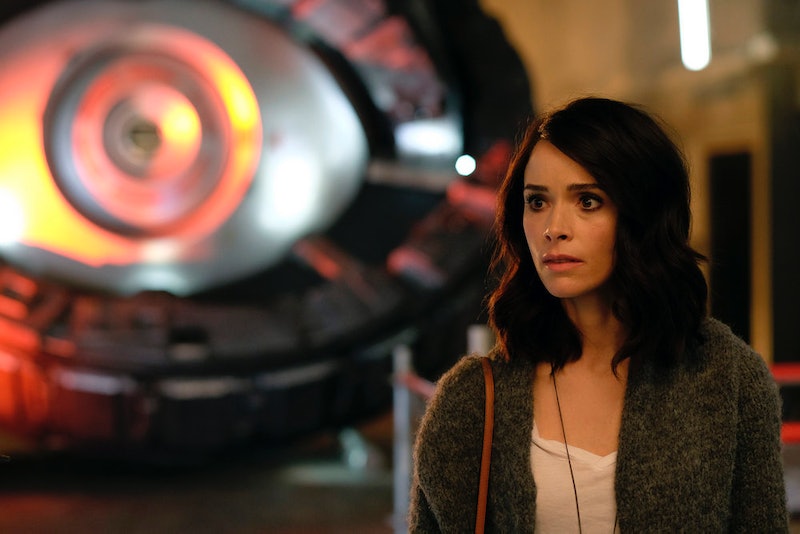 On NBC's new drama Timeless, Lucy (played by Abigail Spencer) teaches history with a passion — but she's totally baffled when she's selected for a team of time travelers with a mission to stop villain Garcia Flynn (Goran Visnjic). When Lucy comes face-to-face with Flynn in 1937, he says being history professor has nothing to do with why she was chosen and she needs to "ask then what Rittenhouse is." So wait, what does Rittenhouse mean on Timless and how will it affect Lucy? She eventually does ask about the R-word at headquarters, but the time travel bosses feign ignorance, so Lucy — and viewers — are going to have to figure out the answer.

For me, Rittenhouse Square in Philadelphia immediate came to mind, so perhaps something significant happened to Lucy in the City of Brotherly Love. There's also a chance that this piece of Lucy's own history has something to do with the square's namesake, David Rittenhouse, who was the first director of the United States Mint, according to the University of Pennsylvania archives. William Rittenhouse, a descendant of David, is famous for being the first paper maker in North America and establishing a paper mill, according to the Paper Industry Hall of Fame. Perhaps these two historical figures have something to do with Lucy's ancestors — or maybe she'll time travel to see them in a future episode.

But Timeless is a show about time travel and how changing history is sometimes inevitable. So really, the "Rittenhouse" that Flynn was referring to may not even exist yet, because Lucy hasn't traveled to an era and changed what she needs to change in order to unlock it in history (get it?). In the pilot, Lucy and the team accidentally prevent the Hindenburg disaster of 1937, which sounds like a victory on the surface. When Lucy returns home to her own actual timeline, she finds her mother alive and healthy, but her sister Amy banished out of existence.

So it seems like only time will tell what exactly "Rittenhouse" means for Lucy and Timeless.