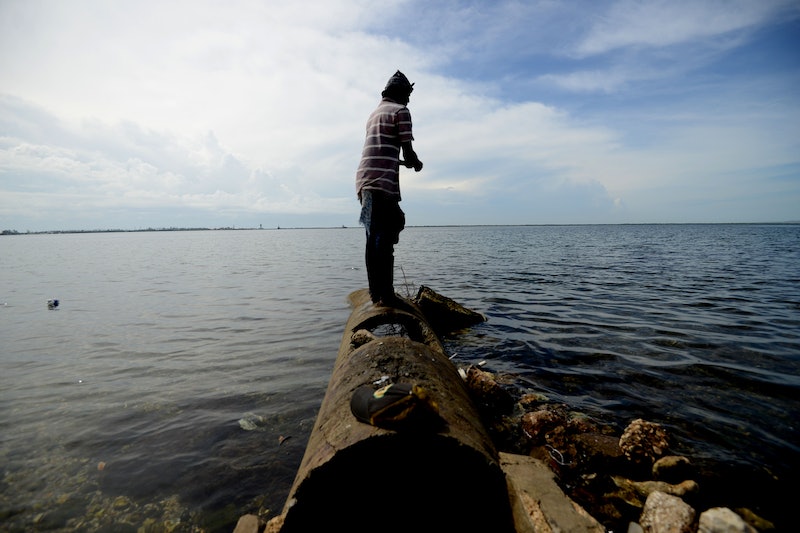 A category 4 hurricane is swirling in the Caribbean, threatening people, property, and more in Haiti — a country still recovering from a devastating 2010 quake. More than 40 inches of rain may fall there, and winds are currently reaching 145 mph. It doesn't look good. The U.S. National Hurricane Center put out a warning: "This rainfall will likely produce life-threatening flash floods and mudslides. Preparations to protect life and property should be rushed to completion." With warnings like that, the path of Hurricane Matthew will be a concern for people throughout the region and on the East Coast.

The next landfall will be made in Haiti, where damage could be particularly deadly. "With wind this strong, it will be extremely damaging and dangerous and homes for the average person are made of mud and sticks or poorly constructed cinder blocks," John Hasse, the Haiti director for humanitarian aid group World Vision, told CNN. Even after the storm, cholera could be a big problem. The country's still reeling from an outbreak six years ago caused by UN aid workers.

After Haiti, current computer models point to the storm hitting to Jamaica. There the airport is already closed and residents have spent the day preparing for what could be the worst storm the country has seen since 1988. Jamaica Prime Minister Andrew Holness has been touting preparation as the nation's best chance of escaping the storm unscathed. "We will see significant damage to property and dislocation and human suffering that will come from such an event if we do not prepare," Holness told a Jamaican paper, The Gleaner.

Other islands in the area will also be affected, including eastern Cuba and parts of The Bahamas. From there, the question is whether the storm will affect the United States. Increasingly, it looks like the answer is yes. "The threat to Florida and the southeastern U.S. coast has increased," the National Hurricane Center said Monday. Considering the new information, the storm should make landfall on the Atlantic Coast sometime later in the week if nothing changes. The governors of Florida and North Carolina have already declared states of emergency.

Either it will hit somewhere along the coast or it will follow the coast to the north, never making landfall. It could do that rather close to shore or further out — which would obviously make a difference as to its effect on coastal cities. "While there is more suggestion of a coastal scrape than a landfall at this time, a U.S. landfall certainly isn't out of the question," meteorologist Brian McNoldy wrote for The Washington Post.

FEMA hasn't made any moves, a spokesperson told ABC News. But they lauded people who are trying to get ahead of the storm and make preparations. "It's too soon to know what impact, if any it, will have on the U.S, but we're urging individuals to take advantage of the time they have right now to prepare," the spokesperson said.

So if you're in Hurricane Matthew's potential path, consider that advice.