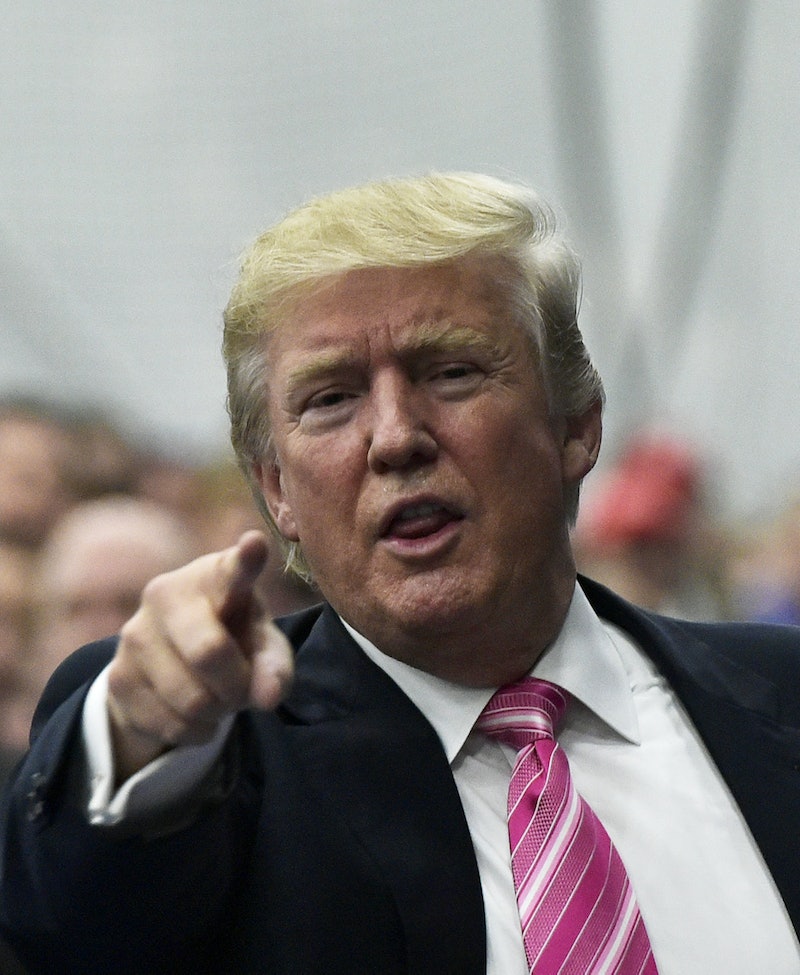 Throughout this presidential race, Donald Trump has made very clear those types of bodies he believes are deserving of respect, and those that are deserving of contempt. During Tuesday night's vice presidential debate, he and his team tweeted that the country needed strong, broad-shouldered (aka male) leadership to keep our people safe, and that Tim Kaine looked like a movie villain. In the past, he's said that Hillary Clinton doesn't have "the look" to be president, and he's openly mocked candidate Carly Fiorina's appearance. He has mocked women and disabled people. But it appears that Donald Trump disdains no one more than he disdains fat people.

Since the first presidential debate, one of the hottest topics of conversation has undoubtedly been Donald Trump's repeated instances of fat shaming. After Hillary Clinton mentioned her in the debate, Miss Universe Alicia Machado recounted to the world tales of Trump's previous cruelty regarding her body — Trump had called her Miss Piggy and told Fox & Friends "She gained a massive amount of weight, and it was a real problem. We had a real problem" — and the nation took notice.

How dare Donald Trump fat shame such an obviously beautiful woman? For me, the most important takeaway from Trump's fat shaming against Machado is not that he called her "fat" when she isn't, but that his words are a reminder that fat is still perceived as one of the worst things a person can be. It's largely believed to be an insult, a curse, and a descriptor with the potential to shatter someone's entire sense of self-worth. And this is why we cannot let Trump's intolerance go unnoticed.

Of course, Trump's fat shaming is nothing new. From calling comedian and television host Rosie O'Donnell "disgusting," "a slob," and the owner of a "fat, ugly face" in 2006, to asking Howard Stern, "Does [Kim Kardashian] have a good body? No. Does she have a fat ass? Absolutely," in 2013, to musing that the person who hacked into the Democratic National Committee server "could be somebody sitting on their bed that weighs 400 pounds" at the Sept. 26 debate, he is as forthright about his intolerance for the world's fat people (most often fat women) as he is about his plans to build a border wall and make Mexico pay for it.

But even though this behavior has been going on for years, it's Machado's story that's been met with the most outrage. Subsequently, the amount of solidarity that has been shown towards her should make us consider where our upset regarding Trump's fat shaming comes from.

Has it come from a place of believing that calling someone fat is one of the worst things you can say to them? Or is it a result of realizing that fat is not a euphemism for lazy, or unhealthy, or unattractive, or unworthy of basic humanity; not grounds for discrimination in the workplace?

Unfortunately, it's likely that seeing Trump fat shaming a former beauty queen has struck a nerve with so many humans because she's a woman many find beautiful, and for most people, beautiful can't be synonymous with fat.

Although the body shaming Machado faced from Trump is not remotely acceptable behavior, the reactions to the shaming are arguably emblematic of some very ingrained fat antagonism in our culture at large. According to Sarai Walker, author of the novel Dietland, calling a woman fat (even five decades after the emergence of modern feminism) is the "same as calling a woman a failure." But it shouldn't be. It should just be the morally neutral, stigma-free descriptor that it is.

In casual conversations about Machado this week, it's likely that you've heard a few folks ask some derivative of, "How could he say such a thing to her?" It hasn't much mattered that beautiful, strong, and empowered individuals come in all sizes. Instead, the focus has been the fact that she is not fat, a word that would lump her into a pool with the rest of us living, breathing Miss Piggys. The ones who aren't just curvy, but unquestionably, visibly, squash-ily fat.

In her article "Fat Shaming Is Not An Individual Problem, It's A Cultural One," published a few weeks before the presidential debate, writer and activist Lesley Kinzel implored readers to consider how their responses to "an average-sized woman [who] rebuffs invasive comments about her body" might differ if the person in question "weighed 250 pounds. Or 300 pounds. Or 400 pounds":

If there is a size at which you would stop cheering, ask yourself why. Find the line you'd draw where you would no longer vocally support a woman fighting fat shaming, and then erase it. Interrogate your own discomfort with fatness and your negative stereotypes about fat people. Call out calculated and limiting ideas like :curvy-but-not-obese" when you hear them expressed. Do your part to contribute to that broader cultural change.

When Trump calls someone someone fat, it's very clear that he is essentially calling them broken. In his eyes — and sadly, in those of many — "fat" still translates to not trying hard enough. It's code for "lazy." It's a word that makes people feel uncomfortable. It's a thing many just don't want to be.

The Republican nominee is a walking, talking billboard for not only misogyny, but for aesthetic-based prejudice. As a result, he's the man who makes others feel better about their own prejudices: The one who says it's OK to treat someone as "less than" simply because one individual has decided they are.

When he uses the term, it is always spewed as an insult. And although many people are waiting (and writing and fighting) for the day when the word "fat" is not a slur, or a punishment, or a malediction, Trump's fat shaming and much of the reactions to it are proof that it still is.

If ever the narrative of fatness as a synonym for "all things wrong with the world" — á la Wall-E, in which the destruction of Earth is inextricably linked to humanity's fatness — we need to reconsider our own utilization of the word. Why does it hurt so much when it's used to describe a person who is beautiful by every social definition? Why doesn't it hurt when it's used to describe one who isn't? Should it ever hurt at all?

Every time Trump uses the word "fat" however, he seemingly wants to project the same story most fat people have heard millions of times before: That we are hideous, corpulent, monstrous entities in need of repair.

But every time we meet his words with a rebuttal that still places negative emphasis on the word itself — every time we feel outrage when it's directed a conventionally beautiful or successful person — we ignore the stereotypes that litter its three letters. And unfortunately, we perpetuate the very tired idea that to be fat is a far worse fate than to be a body shaming, misogynistic, overall deplorable human being.