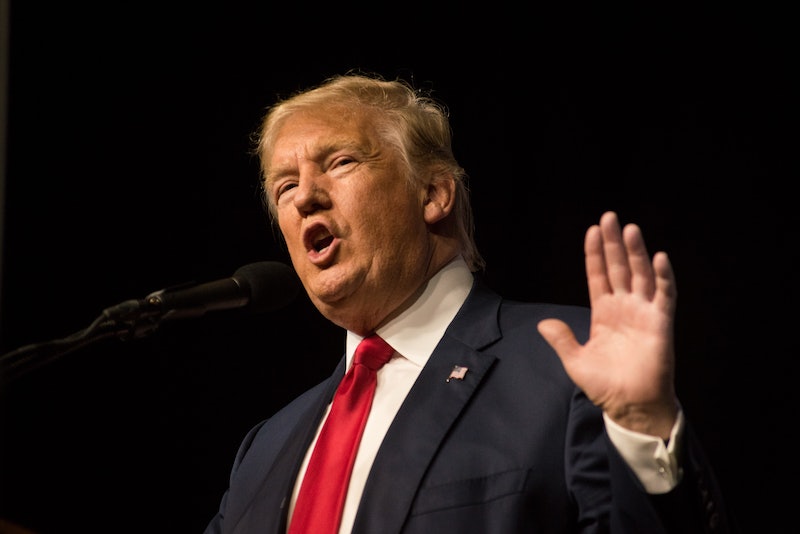 Hillary Clinton has spent the last few months going after the millennial vote — and it's paid off. Back in September, myriad headlines claimed that the millennial vote could cost Clinton the election. She spoke in Philadelphia about what is at stake with their vote. "I need you," she told the crowd at Temple University. "I need you as partners, not just for winning this election, but for driving real change," she said. We've yet to hear a similar plea from her opponent. Besides a tweet featuring his three children, Trump hasn't made overtures to millennials at all. In fact, through his policy decisions, he's largely dismissed them.

A vast amount of research has been conducted regarding what matters to millennial Americans. The Pew Research Center's project on millennials notes that the demographic gives Congress a higher approval rating than any other age group does, but at the same time they're less likely to consider themselves a Republican or a Democrat. That said, millennials are fine with more government, generally.

Sounds confusing, but there are a number of issues that are particularly important to millennials, and Trump hasn't been paying them the slightest bit of attention — or he has taken the other position. You'll see that ISIS and walls with Mexico are not on the list. Here are the seven policy areas that Trump uses to dismiss millennials.

In case you are wondering what Trump's thoughts on Bernie Sanders' free college plan are, there is no doubt. At all. A student in Wisconsin asked him at a rally about the issue. Trump's response didn't even pretend to understand what it's like to pay for school nowadays. "There’s no such thing as free education," Trump told him, "because you know that ultimately somebody else is going to be paying for that education: the taxpayers."

Here's one of the areas that arguably Trump has worked to appeal on: jobs. Millennials rate creating jobs as one of the most important issues to them. Some 79 percent said the government should be more involved creating employment, according to a Harstad Strategic Research, Inc. survey. Trump flip-flopped on the minimum wage all the way back in July.

3. Helping The Poor, Those "Morons"

Helping those living in poverty is another area that millennials feel strongly about. Maybe it's because so many of them are poor, but 76 percent want the government more involved in the solution, Pew reports. That goes against what Trump said in the 1990s. The Daily Show tracked down this old quote about those living in poverty:

My entire life, I've watched politicians bragging about how poor they are, how they came from nothing, how poor their parents and grandparents were. And I said to myself, if they can stay so poor for so many generations, maybe this isn't the kind of person we want to be electing to higher office. How smart can they be? They're morons.

So, if you're in poverty, you're a moron? Is that a way to improve their economic situation — by making fun of them?

4. Social Security And A Safe Retirement Only For The Rich

Trump says he won't mess with Social Security, something that matters to millennials too, despite their age. When it comes to retirement, 76 percent of millennials think the government's role should be increased. And yet Trump has no plan to protect Social Security for future generations. Sad!

5. Pollution And Climate Change Not A Man-Made Problem

The average millennial is going to live longer than Trump and his peers. Maybe that's why they believe in climate change and hope to stop it. Not Trump. And just in case you thought his comments on the matter were a slip, his campaign manager will clear it up for you. "He believes that global warming is naturally occurring. There are shifts naturally occurring," Kellyanne Conway told CNN's Alisyn Camerota. That's in comparison to the 76 percent of millennials that want the government to work to limit pollution, with 69 percent wanting efforts to fight climate change, according to Pew reports.

This is huge. Some 80 percent of respondents to a Harstad Strategic Research, Inc. survey said that focusing on keeping abortion legal would be an appealing position for a potential congressional candidate. And yet Trump has also flip-flopped on this and even said that women should be punished for getting them, or maybe not. But regardless, his take is scary. Here's what he said in a letter to supporters as recently as September:

I am committed to:

-Nominating pro-life justices to the U.S. Supreme Court.-Signing into law the Pain-Capable Unborn Child Protection Act, which would end painful late-term abortions nationwide. -Defunding Planned Parenthood as long as they continue to perform abortions, and reallocating their funding to community health centers that provide comprehensive health care for women. -Making the Hyde Amendment permanent law to protect taxpayers from having to pay for abortions.

It doesn't sound like he cares about what most Americans and most millennials think.

7. Sensible Gun Control? Not Under A Trump Presidency

This is also a big deal with millennials. Harstad Strategic Research, Inc.'s survey showed that 83 percent of respondents support, to some degree, stronger background checks. Trump said he endorsed gun control — but it's not comprehensive. Basically, he's opposed to people on the no-fly list having guns. But that's just one step. The NRA loves him. For example, he thinks that banning assault weapons is a mistake. That doesn't sound like a solution that millennials can take seriously.

These may just be seven areas that Trump has gone against the views of millennials, but they're far from insignificant. When you combine that with his potential Supreme Court nominations along the lines of Antonin Scalia, and you can bet the needs and wants of millennials won't be met anytime soon.