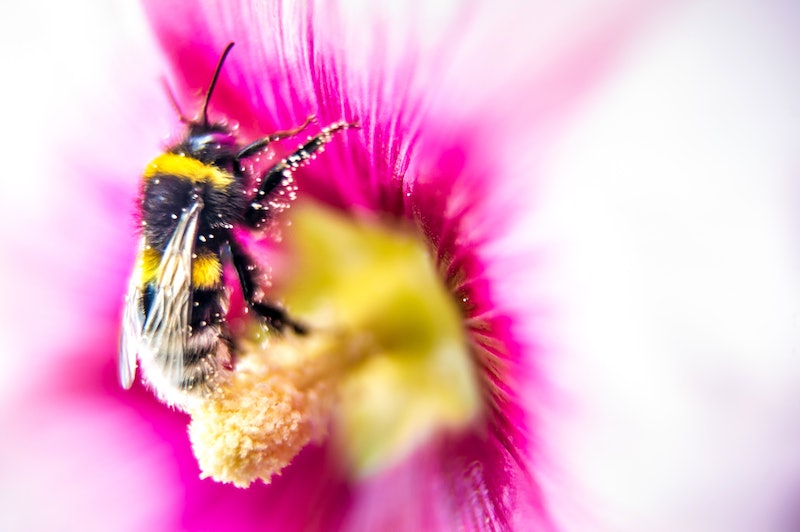 It's hard enough to get people to consider the feelings of farm animals raised for food, and whether or not it's ethical to be slaughtering them — let alone the emotions of insects, which are harder for humans to relate to. Most of us don't give swatting a fly or killing a spider a second thought. But is it possible that we should — that we are killing animals that not only feel pain, but also have more nuanced feelings? Insect "emotions" are beginning to show signs of promising scientific interest, although it's not entirely clear where they fit into our (human-centric) understanding of feelings.

Many insects share the same basic nervous system, so it's possible that, in the future, we'll be able to track emotional responses in spiders, sadness in cockroaches, existential malaise in ants ... I'm kidding. But only partially; investigating the emotional possibilities of insect breeds has only just begun. The reality is that we're still very bound by preconceptions of insects as startling little animals who provoke fear in us, without considering that they may also be able to experience fear (and happiness, and empathy for others) in themselves.

If this makes you a little less keen to throw that spider out of the window when you discover it in the bath, so be it.

What We Know About Insect Emotions

The problem with "emotional" responses is that we can't actually understand what lies underneath them in creatures with whom we cannot communicate. Until somebody teaches a butterfly or a slug to speak English, we'll have no idea about their emotional states, and that seems extremely unlikely given the size of their brains. But some evidence suggests that there might be "emotional states" in the lives of some insects.

A study back in 2011 found that bees can tend towards being upset: after being shaken about, they measured the levels of different neurotransmitters in bee brains, and found ones associated with mood, like dopamine and serotonin, were reduced after a bad experience. (I know; poor bees.) But, as we'll talk about in a second, bees may be a special case. So the fact that findings have been found in other insects too is a bit remarkable.

In 2015, for instance, fruit flies seemed to reveal the experience of fear to scientists, who'd broken down "fear" as an emotion into certain component parts, like repeated exposure meaning greater reaction. When they were exposed to something fear-inducing, the flies appeared to show "fear" rather than just an automatic response. And, in a slightly less clear-cut study, calm woodlice were seen to be able to soothe more upset and agitated ones, which may be used to demonstrate emotional empathy or contagion.

But new science revealed recently about bees introduces us into what might be into a new era entirely for insect emotions. Not only do they get upset, they may also get optimistic.

Do Bees Get Happy?

A fascinating new study published in Science indicates that, at least when it comes to bees, ideas of emotionality might actually apply. It seems that dopamine in bees, rather like in humans, can create a "better mood," making them more optimistic and help them overcome worries and miserable experiences. Bees, let's remember, are a very particular type of animal. Their communicative abilities among themselves are legendary (the fact that some kinds "dance" to indicate the precise location of food in their nearby area to other bees in their hive is one of the most complicated communication mechanisms known outside of humans.) So it's not legit to take the new science to indicate that every insect has an emotional range.

Bees can't spell out HAPPY or SAD to us using conventional methods, but the researchers found ways to measure how their current state affected their perception of future outcomes. As the lead scientist, Clint Perry, pointed out to New Scientist , physical changes in our body chemistry and behavior are often intrinsically related to emotion, so just because we can't inquire about a bee's internal emotional state (whether they "feel" anything or not) doesn't mean we can't see how various things might affect the way in which they judge the future and make decisions.

So when it came to looking at bee-happiness, the researchers did some pretty interesting behavioral studies. First, they trained their group of subject-bees to associate two different colored doors with different outcomes: blue meant sugar water, green meant plain water. (Bees, obviously, massively prefer sugar water.) Once they'd got that down, they gave them an ambiguously colored door, not clearly blue or green, to see what they did. But, crucially, they divided the bees in half: 50 percent got a 60 percent sugar solution before they made their move, and the other 50 percent got nothing. The half who'd had their buzz (sorry) from the sweet treat took a lot less time deciding to go investigate the ambiguous tube, indicating that they might be more "optimistic" about the idea that there would be something nice in there.

(It's important to note, as PopSci does, that it wasn't just a matter of the bees flying faster because they had a lot more energy. The flying speed of the bees was the same whether they'd had a treat or not; they just seemed to make the decision faster if they were dosed up on sugar water.)

Another aspect of positive emotions, the scientists noted, is that they often help us recover from trauma; so they subjected the poor bees to an attack that kind of approximated the experience of being captured by a crab spider. (If you're a bee, that involves being caught in a small space and lightly squeezed.) Before the "attack," though, some had a treat, and some didn't. After they got free, the bees who'd had their treat beforehand flew towards a feeder some four times as fast as the ones who hadn't, bouncing back into their normal behavior. This shows, according to the scientists, that a bit of cheer in the life of a bee helps them get over stressful experiences, rather like self-care in humans.

The most interesting thing about the bee happiness experiments, from a biological perspective, is that the scientists found a way to put a stop to any positive feelings they'd managed to induce by their sugar-laced treats: when they gave bees a dopamine inhibitor, the more positive behaviour stopped. Dopamine is, in humans, massively related to pleasure; as Psychologist World notes, "dopamine commonly associated with the 'pleasure system' of the brain, providing feelings of enjoyment and reinforcement to motivate us to do, or continue doing, certain activities. Certainly dopamine is released... by naturally rewarding experiences such as food, sex, abuse of drugs and neutral stimuli that become associated with them." So do bees have the same sort of emotional brain as humans, just on a much, much smaller scale?

Instincts say this is a massive reach without much, much more data. However, an accompanying article in Science , experts from the Centre of Behavioral Biology in Bristol, reviewing the bee study, say that it reveals a few interesting possibilities about emotions. If they do really exist in creatures as diverse as humans and bees, they might have a common evolutionary purpose; the Bristol scientists suggest that emotions might be helpful when they need to make decisions about their surroundings. A lot of science in humans has focussed on the evolutionary necessity of fear, an emotion that helps us do everything from avoid potentially dangerous strangers to veer away from dodgy foods. But what's the purpose of happiness, for bees or for humans?

There are a variety of ideas about what it might be for. Experiencing a rush of happiness after a good outcome reinforces that it was an excellent idea, and makes us more likely to do it in the future and invest resources in it. A study of 184 orang-utans back in 2011 found that the ones that seemed "happiest" (whether they enjoyed social interactions, for example) were by far the ones that lived longest, indicating that joy may present a serious evolutionary advantage, though it's unclear exactly what it is. When it comes to bees, though, evidence isn't sufficient to show that it makes things better, just that it's around and that dopamine plays a role in bee decision-making.

This is basically the first step in a lot more science about how dopamine and other emotion-related chemicals might seem to influence behavior in animals. But it doesn't mean we can assume that bees experience emotional states the same way as humans do. This is not, unfortunately, A Bug's Life.