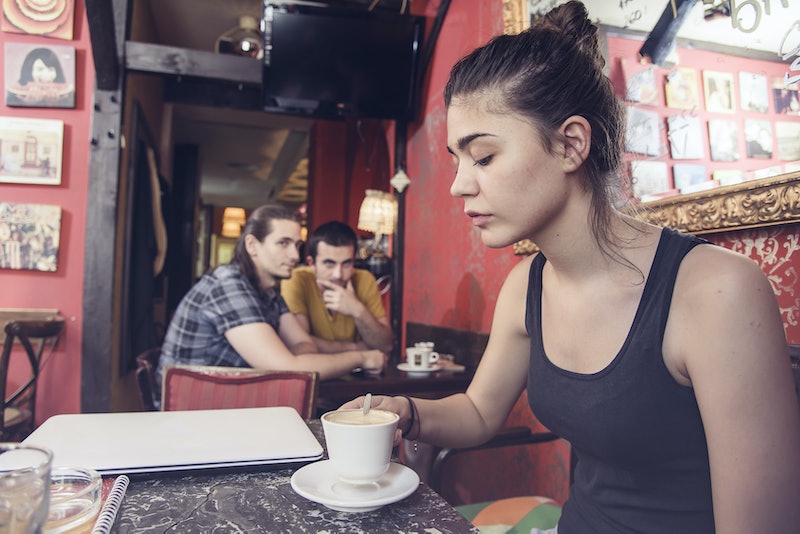 "Can't you compliment a woman anymore these days?" is a common complaint about the movement against catcalling. But there are many differences between compliments and sexual harassment. In fact, there are basically no similarities.

A video by Stuff Mom Never Told You's Cristen Conger recently shared by Everyday Feminism drives home exactly how different a compliment actually is from harassment. Although the video, titled "If Catcalls Were Compliments," is a few years old — it dates back to 2014 — its lessons on some of the major distinctions between compliments and catcalling are still, sadly, absolutely relevant.

Conger points out, for example, that Webster defines a compliment as "a formal act or expression of civility, respect, or regard." When you catcall someone, on the other hand, you're not being civil, showing respect, or holding them in high regard. Similarly, the Google definition of a compliment is "a polite expression of praise or admiration," and "polite" is really the key word there. When you compliment someone, you are treating them with dignity. When you harass someone, you are conveying that they're below you — which is the polar opposite of praise.

The definition of street harassment, conversely, is "unwanted comments, gestures, and actions forced on a stranger in a public place without their consent," according to Stop Street Harassment.

But in case mere dictionary definitions aren't enough to illustrate how catcalls and compliments are totally different, here are a few more points worth noting

1. A Compliment Is Something You Would Say To People You're Close With

To determine if your "compliment" is really a compliment, says Conger, decide if this statement is true: "If I said this to a coworker, close friend, or family member, I wouldn't come off as a total creep." For example, you might not generally say "Hey, sexy" to a friend (although you might — it depends on what your relationships with your friends are like), but you might say, "I like your shirt." The latter is a compliment; the former is harassment.

3. Compliments Aren't A Means To An End

If you're trying to get a reaction out of someone by complimenting them, you're not really giving a compliment, Conger points out. Some street harassers will retaliate after people don't respond to their harassment, suggesting that they're trying to gain something from it rather than simply making the other person feel good.

4. A Compliment Is Something You Want To Hear And Want Your Loved Ones To Hear

One easy way to tell if something's a compliment or harassment is to ask yourself whether you would want to hear it. Or, says Conger, check if this statement is true: "If someone said the same thing to a loved one, a romantic partner, or just anyone I had basic respect for, I wouldn't be offended at all."

Complimenting someone establishes a relationship with them and makes them feel safe with you. Harassment, on the other hand, can lead people to feel unsafe. A true compliment will help people open up to you, while harassment will make them want to avoid you.

6. Compliments Get A Positive Reaction